by John Johnson
in Emergency Services News, Police Service, You Couldn't Make it Up
2 min read
0

Being a male, I do not have to spend too much worrying about my eyelashes so I cannot put myself in the shoes (or high heels) of someone who has to spend money/time getting their own eyelashes how they want them to look.

However, I cannot imagine a scenario whereby anyone would think that a set of dodgy eyelashes would ever be worthy of a call to the emergency services.

But colleagues working in a force control room received just such a call from an irate lady who was not impressed with the outcome of her lashes.

‘999 call from a female reporting that she wasn’t happy with her false eyelashes as one eye was different to the other.

‘She had dialled 999 as the salon wouldn’t take the lashes off.

You can just start to imagine the ‘face palming’ action of the staff at the salon as their disgruntled customer first threatened to call the police.

And then actually called the police.

At a time when police officers are being stretched to the limit, what did this lady really expect that the police could/would do about her situation?

Whilst some people can easily get confused when discerning between what is a ‘civil dispute’ and what is worthy of an emergency police response, I find it particularly hard to understand just why anyone would think that the police would come dashing to the salon on blues and twos!?

What this lady perhaps also does not understand, is that that, whilst she was talking to the police staff, then someone with a genuine life-or-death emergency could have been trying to get through to the police.

I can only hope that by sharing these sort of stories, then more people will become suitable enlightened as to what does and what does not constitute a police emergency.

’emergency’ being the key word here…. 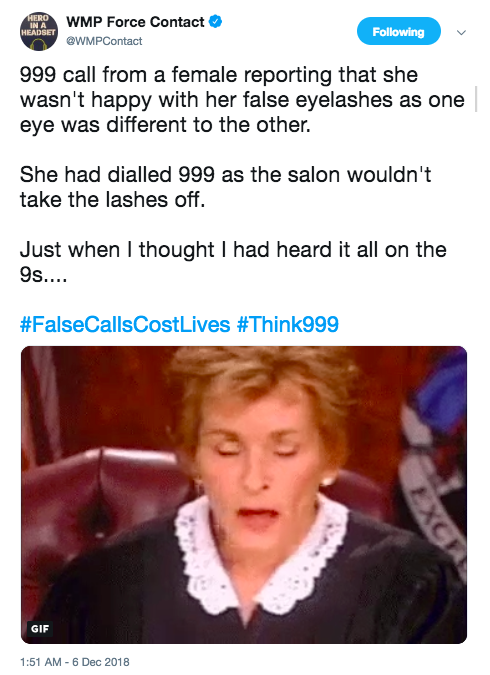 Dodgy Driver Stopped By Police With Carpet Draped Over Windscreen