What Do You Notice About The Male In This Picture?

If you noticed that the male in the bottom of the picture was literally doing nothing other than mowing the lawn on the front yard of his house, despite the fact that there is clearly an accident / incident behind him, then you did well and, chances are, you are a member of the emergency services family.

Well, the bane of many emergency services personnel is the annoying and awkward on-looker who has clearly recently passed out of the ‘College of Professional Bystanders’.

Note, in particular, how in the image the male isn’t filming the accident/incident scene on his mobile phone. He isn’t taking picture of any injured parties with the hashtag ‘#OMG literally the world has ended on my street’

Or notice how the in the image isn’t taking any pictures of the scene or creating a ‘selfie’ with the police cars and the overturned vehicle behind him.

Marvel in the delight, that this male is not trying to advise the police on how to do their job, or advise them on what the best action to now take is in relation to the upturned vehicle.

Neither is the male with the lawnmower asking how long the road is going to be shut for, or when will he be able to drive round to his mates house, as they have an on-line session of Call of Duty booked into their social calendar.

He is not doing anything other than just getting on with his day, whilst letting the emergency services do their job.

He isn’t thinking about taking a picture of the Officers in order to send the picture in to an anti-police news website in the hope of getting his next Nando’s or PFC meal paid for.

He isn’t asking for the badge numbers of the officers and he isn’t telling them that he pays their salaries; as if often what is experienced by emergency services personnel whilst dealing with these sort of incidents

Let’s assume, owing to the number of Police vehicles in attendance at the scene, that the car overturned as a result of a police pursuit.

And yet, he still is not interested in trying to get 2 minutes of internet fame by shouting ‘police brutality’ without knowing why the driver fled.

Of course, that is, assuming that the driver was fleeing from the cops.

He is just getting on with his day.

There is a lesson to be learnt here. We will let you decided as to what it could be. But in essence, there is no such thing as the ‘College of Professional Bystanders’ – and for good reason!

Thanks to Daniel for sending this picture into the team via our email address at: emergency_services_humour@outlook.com.

We are going to leave the picture below, just so you can marvel in it’s beauty and simplicity. 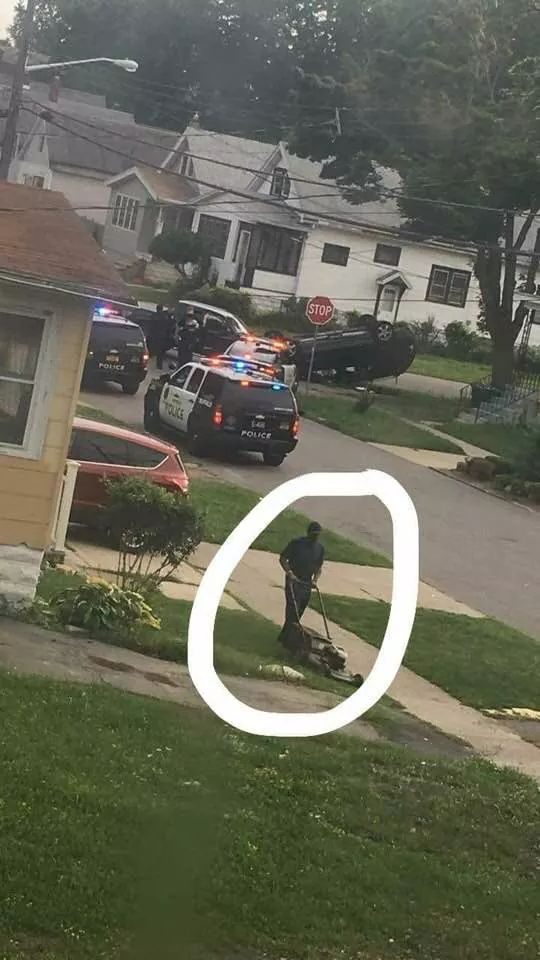