WESTMINSTER INCIDENT UPDATE: What We Know So Far

A MALE has been detained and arrested on suspicion of terrorist offences after a SILVER CAR crashed into the large barriers along an access road to the House of Parliament.

The vehicle appears to have been driven down the access road towards the Houses of Parliament, at which point the vehicle has struck the barrier and come to a stop.

Pictures from the scene show a male in handcuffs being led away by armed police.

Within minutes of the car coming to a stop, 6 armed response vehicles simultaneously arrived at the scene.

Officers immediately surrounded the silver vehicle, with their MP5’s aimed at the driver.

Police have confirmed that a number of pedestrians have been injured in the collision and a witness has told the press that ‘several cyclists were hit’.

A large cordon has been put in place around the incident in order to allow the emergency services to undertake an investigation.

Specially trained Police Dogs have also been spotted with their handlers making a sweep of the area.

The civilian press have been reporting about the fact that a ‘terrorism act cordon’ was being put in place, but this does not necessarily mean that the incident has been determined by the Police as being a terror-related offence.

Eyewitness Ewalina Ochab told the Press Association: ‘I think it looked intentional – the car drove at speed and towards the barriers.’

She said: ‘I was walking on the other side [of the road].

‘I heard some noise and someone screamed.

‘I turned around and I saw a silver car driving very fast close to the railings, maybe even on the pavement.

‘The person driving did not go out’ of the vehicle, she said.

‘At 07:37 hrs on Tuesday 14 August, a silver Ford Fiesta collided with a number of cyclists and pedestrians, before crashing into barriers outside the Houses of Parliament.

The driver of the car, a man in his late 20s, was arrested at the scene by armed officers. He has been taken to a south London police station where he remains in police custody.

He was arrested on suspicion of terrorist offences.

There was nobody else in the vehicle, which remains at the scene and is being searched. No weapons have been recovered at this stage.

A number of people were injured as a result of the collision and they have been taken to hospital.

At this early stage none of the injuries appear to be life-threatening.

Officers remain at the scene and cordons are in place to assist the investigation. Road closures in the area are likely to remain in place for some time. Westminster Tube station is currently closed.

At this stage, we are treating this as a terrorist incident and the Met’s Counter Terrorism Command is now leading the investigation.

Anyone with information that could assist with the investigation can call 0800 789 321.

Anyone who may have footage or images of the incident is asked to send them to police via: www.ukpoliceimageappeal.co.uk

The public can also expect to see extra police officers – both armed and unarmed – out on the streets in and around central London.

The public should remain vigilant and if you see anything suspicious that causes concern, dial 999 immediately.’

A statement released by the London Ambulance Service said: 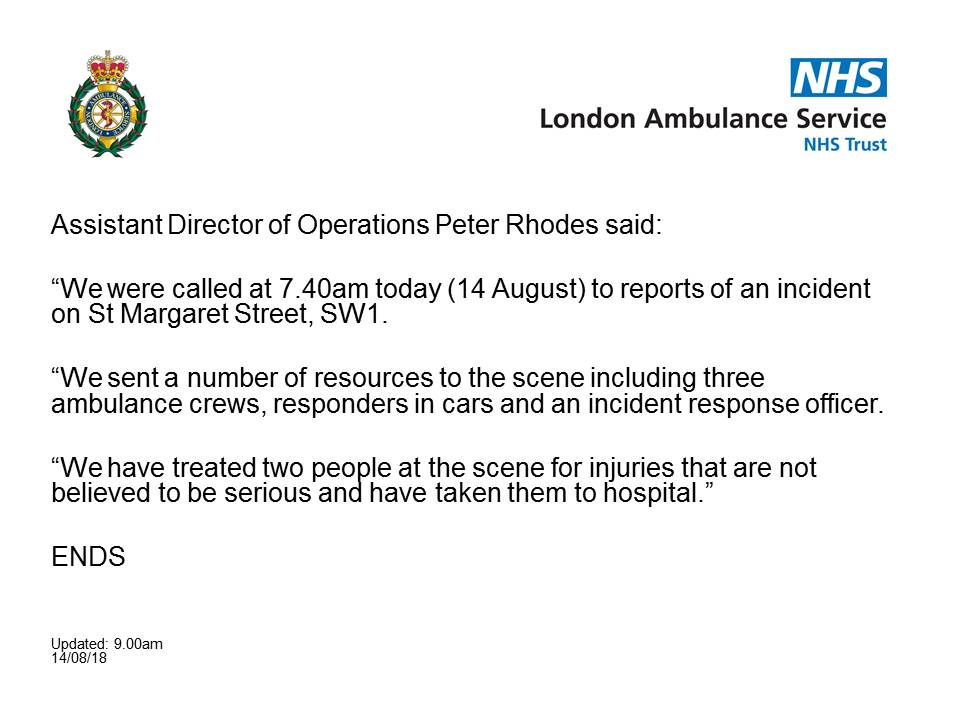 We will update this article as-and-when any additional information comes to light.

Dodgy Driver Stopped By Police With Carpet Draped Over Windscreen