This article will ‘please’ the usual crowds who gawp at the sight of police officers who dare to have a break whilst bleating ‘shouldn’t you be out catching criminals!?’.

It’s the sort of story that probably will be ignored by some sections of the mainstream media who seem only to ever share negative stories about our police oppos.

But that’s where our ‘news’ website is a bit different – not least because each member of our team has actually served in the emergency services.

West Midlands Police had a good result after a gang decided to use stolen vehicles to ram the front of a shop in order to help themselves to the cashpoint contained therein.

A press release published on the West Midlands Police website revealed that:

‘A man who dragged a cash machine from a shop in Birmingham has been jailed for nearly five years.

‘Taron McAuley was part of a group who used two stolen Land Rovers to steal an ATM machine from One Mobile on Edward Street, Balsall Heath around 11pm on Thursday 1 March

‘The thieves tied a strap around the free-standing cash machine, which contained an estimated £100,000, and dragged it out of the shop using the stolen cars.

‘Witnesses phoned 999 and officers arrived with minutes despite adverse weather. The gang fled the scene but the cash machine came loose and was left lying in the road. Officers found this and the stolen cars in Goodby Road, Moseley and a pursuit ensued.

‘One of the cars, driven by McAuley reversed and rammed two police cars before hitting a lamppost on Shutlock Lane. He ran off from the car and hid from officers but was found shortly after and arrested.

‘McAuley pleaded guilty to burglary but pleaded not guilty to handling stolen goods and driving dangerously, however he was found guilty by a jury and sentenced to four years and eight months for all three offences at Birmingham Crown Court on Wednesday 19 September.

DC Louise Davies, from the force’s priorities team said: “McAuley was part of a gang who used stolen high-powered cars who went to great lengths to try and get away with the stolen cash machine. His actions were reckless and put many others in danger as the road conditions that evening were treacherous.

“In his desperation to get away from armed officers he caused over £20,000 worth of damage to two of our armed response vehicles.” 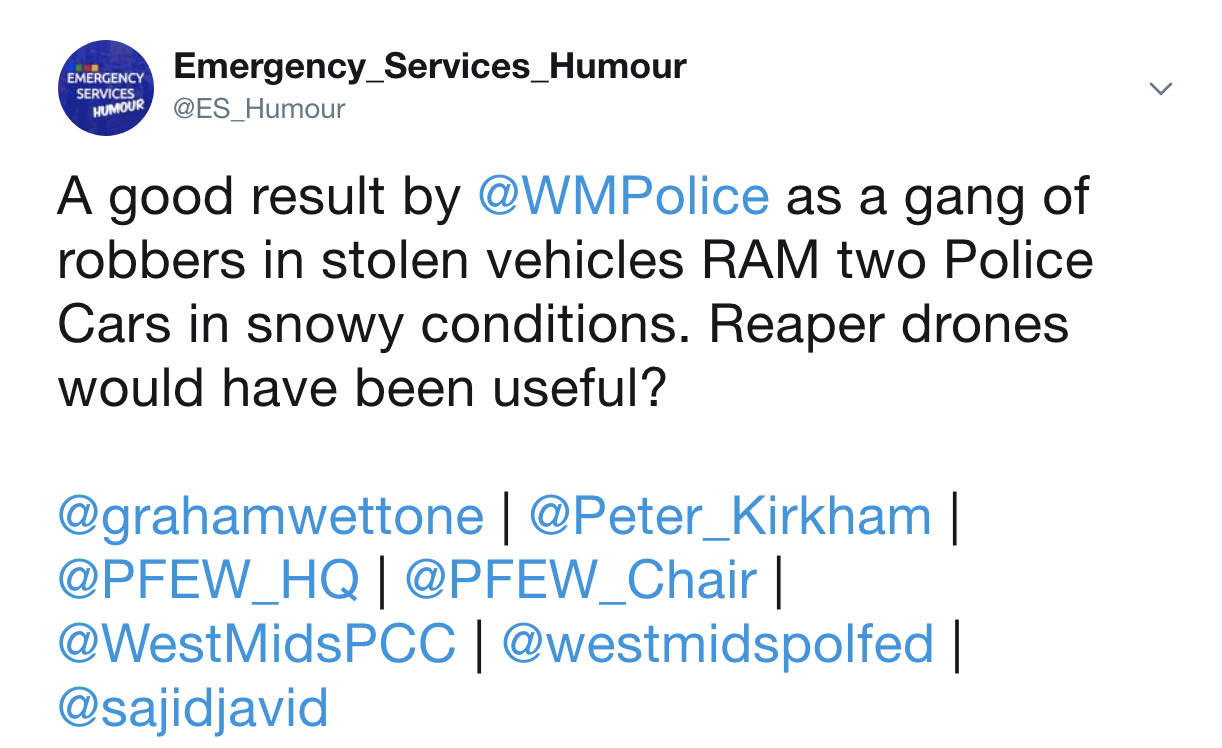 I am not too sure how well our suggestion for Reaper drones will go down, but hey, if you don’t ask, then you don’t get?

Why should criminals be allowed to think that they can get away with ramming police cars without any immediate repercussions from such actions?

Maybe I am just a bit sour, having been rammed by cars which did not want to stop for me and my colleagues during my time in the Met Police.

It’s not just the lives of the officers which are put at risk by such actions, it’s also the lives of members of the public who are at risk when criminals decide that they do not want to face the music after they commit a crime.

Letting the police have access to reaper drones might persuade violent criminals to stop for the police, rather than them causing destruction and mayhem by their selfish actions.