A new and worrying report has shockingly revealed that TWO out of every FIVE paramedics serving in the West Midlands Ambulance Service (WMAS) have been attacked in the last year alone.

Staff working at West Midlands Ambulance Service posted the HIGHEST figure of ANY Trust in the country when they were asked if they had experienced physical violence from patients in the last 12 months (including the patients’ relatives or members of the public).

We were not surprised by this worrying statistic, owing to the fact that we make a point of covering stories which involve our colleagues being assaulted and we have noted, time and time again, that Medics serving in WMAS seem to be repeatedly subjected to the worst behaviour by patients, patients’ relatives and members of the public when it comes to how our colleagues are treated.

A review of trusts up-and-down the country, carried out by Lord Carter of Coles, identified that the percentage of assaults could actually be far higher owing to the fact that assaults against staff are no longer recorded nationally since NHS Protect was abolished.

According to an article on the ShorpshireStar.com website, the figures in the review were calculated using staff surveys and local trust reporting.

Since April alone, there has been 171 shocking attacks on staff. Whilst for the year 17-18, there were 410 attacks!

Many people both inside and outside of the emergency services community and family will be shocked and horrified at these statistics which are a national disgrace.

Just why medics serving in the West Midlands Ambulance Service are more likely to be assaulted ,as they battle to save the lives of their patients, is a mystery.

The review, which also praised WMAS for its efficiency, said that 40% of its staff had come under attack in the last year alone.

Out of the other nine trusts which were looked at, South West Ambulance Service recorded the lowest rate of assaults, with 28% of staff saying that they have been attacked in the course of their duty. 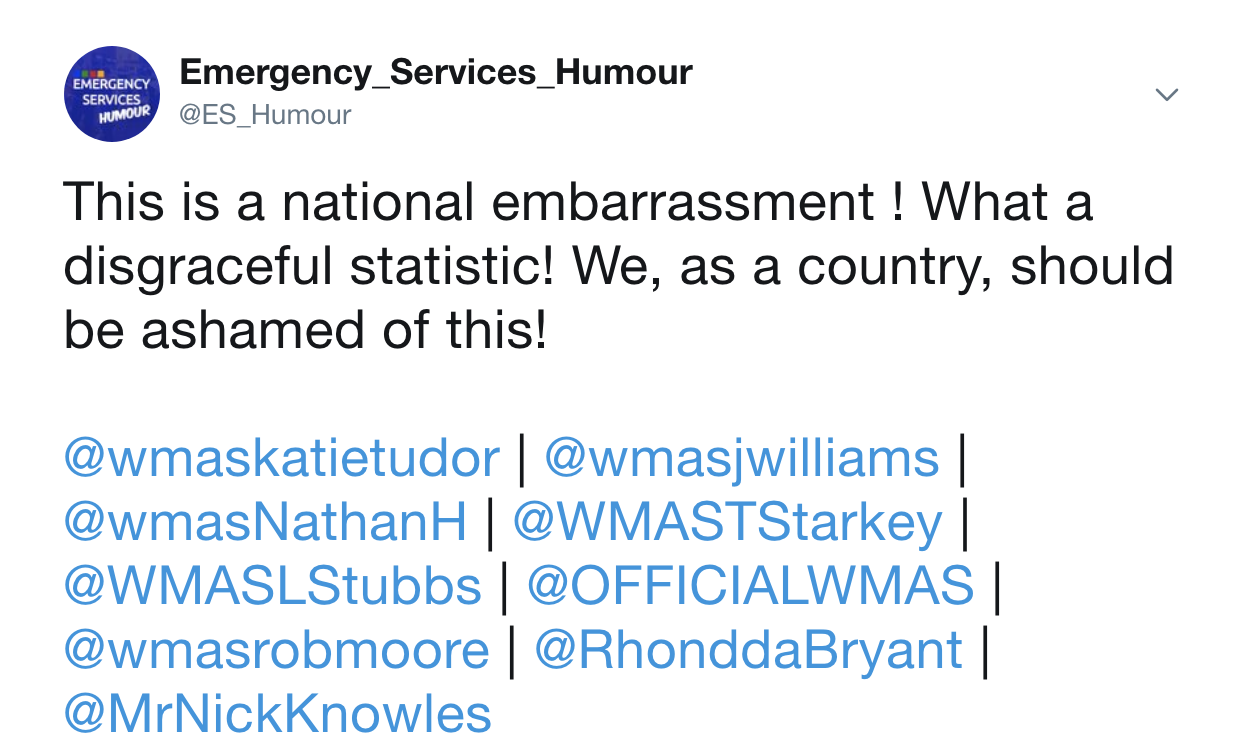 The report says: “Violent attacks against NHS staff have not been recorded nationally since the abolition of NHS Protect, which leaves the voluntary NHS Staff Survey and local reporting mechanisms as the only indicators.

“This means that actual percentages may be much higher. We analysed the levels of physical violence that staff experienced and found considerable variation between trusts.”

Nationally, more than 350 prosecutions have been brought for attacks on ambulance staff over the last year.

Owing to the vile attacks which medics serving in WMAS have been subjected to, crews have now been issued with the same body worn video cameras which are issued to police officers in order to gather evidence against the individuals who decide to assault members of the ambulance service.

Service spokesman Murray MacGregor told the ShropshireStar.com: “The trust works hard to encourage staff to report violence because it is not acceptable.

“The chief executive has been clear that he will push for prosecution against anyone who attacks staff who are doing their best to help the public.”

As an indication to just how resilient medics working on the thin green line are, the report also showed that WMAS had the lowest staff turnover rate of any trust which stood at 9%.

The fact that medics working for WMAS are attacked the most often, is beyond any comprehension.

The individuals who decide to lay a finger on ambulance crews should NEVER be allowed to use ANY of the emergency services again and should be BANNED from EVER being able to access the NHS.

It is about time that the mindless thugs who attack ambulance crews faced the consequences of their actions.

We are yet to see if the new ‘Assaults on Emergency Services (Workers) Act’ is going to have any effect on reducing the number of assaults on emergency services, NHS and HMP personnel – it’s too early to tell.

You only need to spend a few minutes on our website browsing under the search term ‘assaulted on duty’ to see just how bad the situation is.

If you decide to assault a member of the ambulance service, then you truly are a disgrace to this country and everything that this country stands for.

Of course, individuals who have been diagnosed with a mental health conditions are not included in this sweeping statement.

A sweeping statement that is nonetheless based on the fact that we are sick of hearing about how our colleagues are being assaulted when all they are trying to do, is help people.

It’s an absolute and utter disgrace.

We only hope, that Judges up-and-down the country start handing out sentences which mean that those convicted of assaulting members of the emergency services are actually sent to prison.