Recently, you might be forgiven for thinking that, if you are on the thin blue line, more people do not appreciate your hard work and dedication than perhaps do appreciate your sacrifices made in trying to keep this country safe..

I know that during my own time as a response team officer based in east London, that 98% of the people I came into contact with (not just necessarily people who ended up getting nicked) looked at me as if I had just been deposited down a toilet.

But then, to be fair, you tend to just brush off the negative looks and comments which you get from people who are either criminals, have family members who are criminals or who have been hoodwinked by some elements of the mainstream press into believing that all coppers are ‘plebs’.

The sun must have been shining for police officers based in Gt Yarmouth recently, when they returned to their wagon to find that someone had left a bit of paper on their vehicle.

You can just imagine how they probably assumed that they would soon be met with a concoction of ‘colourful’ language that might include something along the lines of: ‘you were bullied at school’.

Their hearts must have therefore been filled with glee when they read the actual words which had been written for them:

‘The work you do is truly amazing, keep it up’ 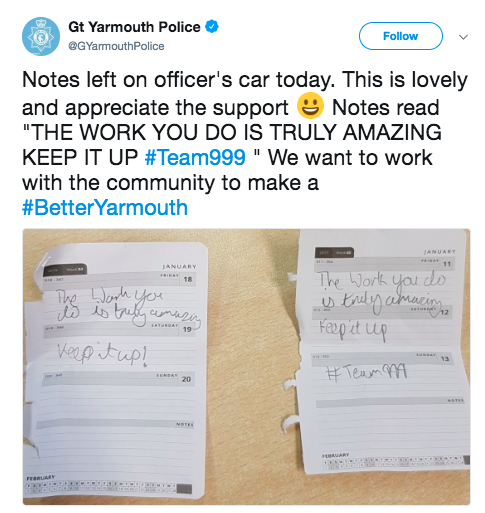 The message had been written on a calendar and rather than just one note being left, there were two of them!

Alas, there were no signs of any ‘tips’ being left as has happened recently with our oppos-in-green (ambulance staff for our civilians readers).

Not that its a bad thing that no ‘tips’ were left, because the officers would have then had to endure no-end of ‘gratuity’ paperwork explaining where the money came from, who left it and why.

Still, it just goes to show that although some sections of the mainstream press will do their utmost to push negative stories which involve the police, there are still those out there who, being of sound mind and judgement, do not get brainwashed into believing that all coppers want to arrest you for not wearing your seatbelt.

Believe it or not, finding these sort of notes can actually result in a temporary spike in morale – so whoever left this note in particular then, on behalf of my former colleagues, thank you!

I will confess to only ever finding either spit on the door handle of my cop car, or maybe, if I was really lucky, then the locals would ‘deposit’ an onion through a window and thus in doing so, take a police response vehicle off the road.

Maybe they were just worried that I wouldn’t get a chance to have something to eat whilst filling out yet another ‘124D’ form for yet another non-crime domestic because adults did not know how to behave like adults.

Maybe I should have taken the onions back to the nick and cooked up a hearty meal for my fellow response team officers.

Everyone loves an onion ring. 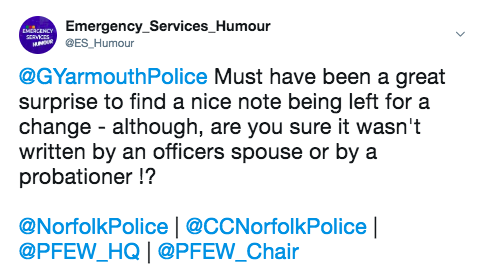