What with the recent chemical weapon attack in Salisbury, the emergency services cannot really take any chances when it comes to calls which involve an unknown ‘noxious’ substance/gas that has the effect of causing irritation to members of the public!

However, over the weekend, revellers in Paisley Town Centre might have been forgiven for thinking that their town was coming under some sort of ‘chemical attack’ after the town centre was cordoned off and a fleet of emergency vehicles descended upon the high street.

At around 21:00 hours last night (Sunday 21st October), the emergency services were called to the Last Post Pub after people starting coughing and choking following a noxious and rancid smell filling the pub up.

At least 8 fire engines and various other police and ambulance resources were sent to the location amid fears that the smell could potentially be related to a huge gas leak.

According to PlanetRadio.co.uk, witnesses said that a woman was heard screaming from inside the pub and others were seen coughing in groups inside the pub before staff evacuated customers at around 21:00 hours.

The area was sealed off for several hours whilst the emergency services tried to locate the source of the smell before it finally emerged that ‘youths’ had set off a stink bomb in the crowded bar.

No arrests have yet been made in relation to the incident during which the emergency services present at the scene could not be used for real and genuine emergencies..

What is a stink bomb?

A stink bomb is a device designed to create an unpleasant smell.

They range in effectiveness from simple pranks (like in this example) to military grade malodorants or riot control chemical agents.

The Guinness Book of Records lists two smelliest substances: one is “US Government Standard Bathroom Malodor”; a mixture of eight chemicals with a stench resembling human feces, only much stronger, designed to test the efficacy of deodorizers and air fresheners, and the other one, “Who me?”, is a mixture of five sulfur-containing chemicals and smells like rotting food and carcasses

At the lower end of the spectrum, relatively harmless stink bombs consist of ammonium sulfide, which smells strongly of rotten eggs. 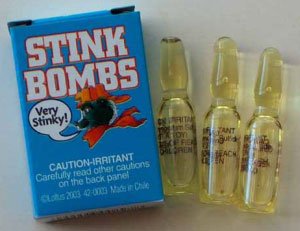 When exposed to air, the ammonium sulfide reacts with moisture, hydrolyzes, and a mixture of hydrogen sulfide (rotten egg smell) and ammonia is released.

Other popular substances on which to base stink bombs are thiols with lower molecular weight, e.g., methyl mercaptan and ethyl mercaptan—the chemicals that give odor to skunks and are added in minute quantities to natural gas in order to make gas leaks detectable by smell.

A variation on this idea is the scent bomb, or perfume bomb, filled with an overpowering “cheap perfume” smell.