Police Use Drone To Search For And Track Robbery Suspects

Before we start, we should probably make it clear to our readers that we are NOT talking here about the sort of military drone that flies over war zones.

Some people might be horrified to think that we have reaper-type drones flying over our heads which are capable of unleashing a payload of supersonic missiles in a split second – but this is not the case.

The drones which are currently being used by Police are the same sort of drones which you could probably buy off Amazon and they DO NOT carry any sort of weapons.

Although many people are starting to think that perhaps they should…

We needed to make that clear, just in case some sections of the mainstream press get hold of this story and try to spin it beyond all recognition.

We heard this morning how Police Officers at the Godiva Festival in Coventry were alerted by revellers to a young lad who appears to have been relieved of his expensive clothing during a robbery. 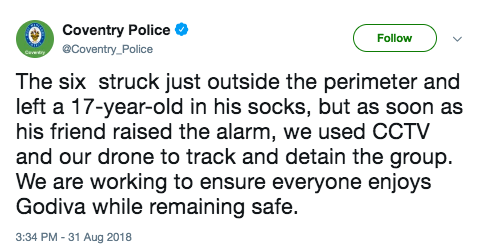 “If you’re heading to the @Godivafestival in #Coventry thinking that there might be easy pickings to rob – think again! We’ve got six in custody for robbing Louis Vuitton trainers and a mobile phone from a teenager.

“The six – all male and aged between 16 and 18 – struck just outside the perimeter and left a 17-year-old in his socks, but as soon as his friend raised the alarm, we used CCTV and our drone to track and detain the group.

“We are working to ensure everyone enjoys Godiva while remaining safe”.

It’s the first time that we have heard of the Police using drones to specifically find/track suspects although the police have been using and deploying drones for some time now.

The majority of the time, police use drones to map crime scenes / serious RTC’s and to search for missing people in open country spaces – and often with good results.

The National Police Air Service only have a limited amount of resources and if a police helicopter is already deployed on a task, then drones are a great alternative for front line officers in a variety of different situations. 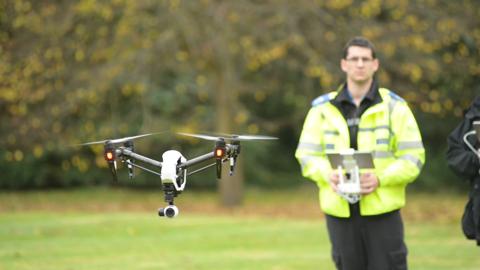 Earlier this year, using £28,000 of cash raised from assets seized from convicted criminals, West Midlands Police purchased three drones and paid for seven officers to be trained to operate them.

There are strict rules in place regarding using drones in UK Airspace (just in case you are tempted to buy one and start your own airborne neighbourhood patrols).

Police said that the drones would help to scan large areas in a short space of time.

So remember, if you hear that your local police force are using drones, then don’t be hoodwinked into thinking that they are the sort of drones which could leave a massive crater in your high street.

These drones are an excellent tool which are used by the police in a variety of different scenarios and situations.

Once the law changes in relation to drones being allowed to fly beyond the visual line of sight, then it won’t be long before response team officers will be able to call upon a drone to assist them pursue / look for suspects.

Thats my prediction anyway and I reckon it will take around 5 years before police drones are used to assist front-lone officers on a day-to-day basis.

I can think of hundreds of occasions when a drone would have been useful when I was still serving in the Met Police; for example, when on a crime scene without any food or water for 12 hours…