Police Stunned As Motorists Drive Without Clearing Frost From Their Windscreens

The force’s Safer Roads Team called it “one of the worst” cases of someone not bothering to clear their windscreen that they had seen in a long time when temperatures dropped to -2C.

During a pre-planned effort, the team, tasked with trying to make the roads safer for all road users, reported more than 15 drivers for failing to clear their windows.

A Northamptonshire Police spokeswomen confirmed to the BBC that the drivers will be prosecuted for failing to have a clear view of the road.

The offence carries a penalty of three points on a driver’s licence and a £100 fine.

Even though spending 5 minutes in the freezing cold trying to clear your windscreens of a hard frost can be a pain in the backside, heading off without a clear view of what is going on around you turns you into a potential wrecking ball.

Often, filling an empty bottle with WARM water can help if you are stuck for time, assuming that you don’t have any cracks or chips in your window.

Whether you try this method or not is up to you and is done at your own risk!

Whilst you might be able to see a few feet in front of your car should you decide not to defrost the entire window, you wont have a clue as to what is going on around you and you will have little chance of seeing pedestrians, cyclists or motorcyclists! 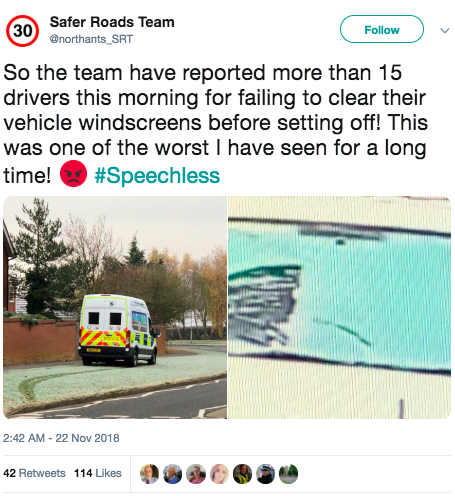