Police have publicly criticised the “disgusting” actions (or lack thereof) of bystanders who took it upon themselves to film a police officer who was knocked off his motor bike instead of having the decency to help him.

The police officer was pursuing a stolen off-road bike in Coventry when he was knocked over on Stoney Stanton Road.

The officer was subsequently taken to hospital due to his injuries but was later discharged with “bumps & bruises”.

“[its] not what any of us come into work for”

“Very disappointed to report that when one of our team was knocked off his bike while pursuing a stolen bike the first thing people thought to do was to record the incident on their mobile phones rather than help the rider,” the team posted on Twitter.

“But spreading all over social media is a MILLION times more invasion of privacy!”. 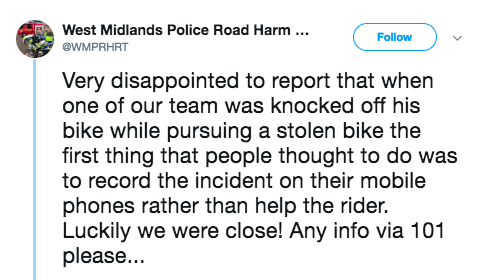 “Absolutely should be stopped somehow totally irresponsible to film someone in distress or worse but to then plaster it all over the internet is despicable.

“Family members or loved ones could first find out about an incident this way totally wrong !!”

“If you have any information about this incident involving our @WMPRHRT @Trafficwmp friends please call 101.

“For those filming our injured colleague…the difference between us & you is if you ever need our help in future, we will still respond.”

“Thank you for the huge outpouring of support for our colleague after yesterday’s incident.

“He has no long lasting injuries and is recuperating at home.

“Anyone with any information on the stolen yellow off road bike being pursued please contact 101”.

Unfortunately, this sort of selfish response from a small minority of the public seems to be the ‘norm’ when it comes to members of the emergency services getting into trouble whilst on the job.

For me, even before my time in the military / emergency services, if ever I saw someone who needed help, then my first instinct would be to try and assist. 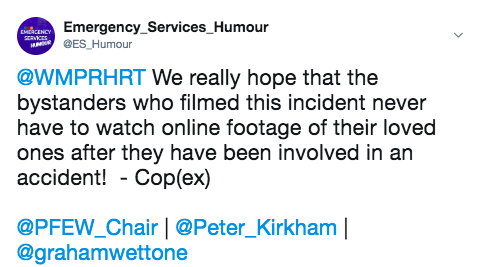 You have got to be a seriously heartless character to, upon seeing a member of the emergency services in trouble, immediately think: ‘quick, I must record this and upload the footage onto social media’.

Most decent people will just mock you for not helping someone who was obviously in need of some help.

And then you will have a reputation among your family and friends, assuming that they are pro-emergency services, for being the sort of character who will just stand by and watch when people are in trouble or need help.

Anyone with any hopes of uploading such footage onto social media, with the aim of living a lavish lifestyle off the royalty proceeds, need to keep in mind that, on average, for every YouTube view your video will get, then you will get £0.00002p.

And thats assuming your video channel is eligible for monetisation features. If it isn’t, and you ‘sell’ your footage, then that £0.00002p per view becomes, at best, £0.00001p.

Whereas if you actually stop and help someone who is in trouble, or who has had accident instead of filming it, then you can sleep well at night knowing that you are a decent person and that you will be admired by most decent people.