PC Andre Owen, an Officer with Sussex Police, was confronted by a woman after she ‘spotted’ him daring to buy a burger whilst on duty.

PC Owen bought a burger 6 hours into his shift having not had anything to eat since starting work at 0700 – he hadn’t even had a chance to stop for any sort of break!

However, as he stood in a queue at a Burger King and waited for his food to be served, a women went over to him and said:

‘whilst you are stuffing your face, there’s criminals that need catching out there’.

Later on that day, PC Owen posted a picture of his meal on Twitter and said:

‘I am over 100 miles from my station and I am due off in 45 minutes..with a two-hour journey at least! #PoliceAreHumansToo’.

PC Owen and his team had been dealing with a serious incident in Brighton and as part of the enquiries associated with that job, had to travel to Oxford.

Over 80 designs of comedy mugs (without the profanities blurred out)

However, whilst en-route back to the nick, PC Owen was involved in another incident that he came across which meant that he had to stop traffic on the M23 in order to help a stranded family that had broken down in the middle of the busy road.

PC Owen finished his shift on Thursday at 7pm, some 12 hours after he started work.

However, we are pleased to say that the whinging member of the public clearly has next-to-zero support in relation to her supposed belief that Police Officers should endure a 12 hour shift without eating.

‘Can’t believe she did not bring up the fact your blowing all of the money she pays for in taxes on your pay rise , on fast food !  i really think you guys should return fire and tell it how it is sometimes!’ 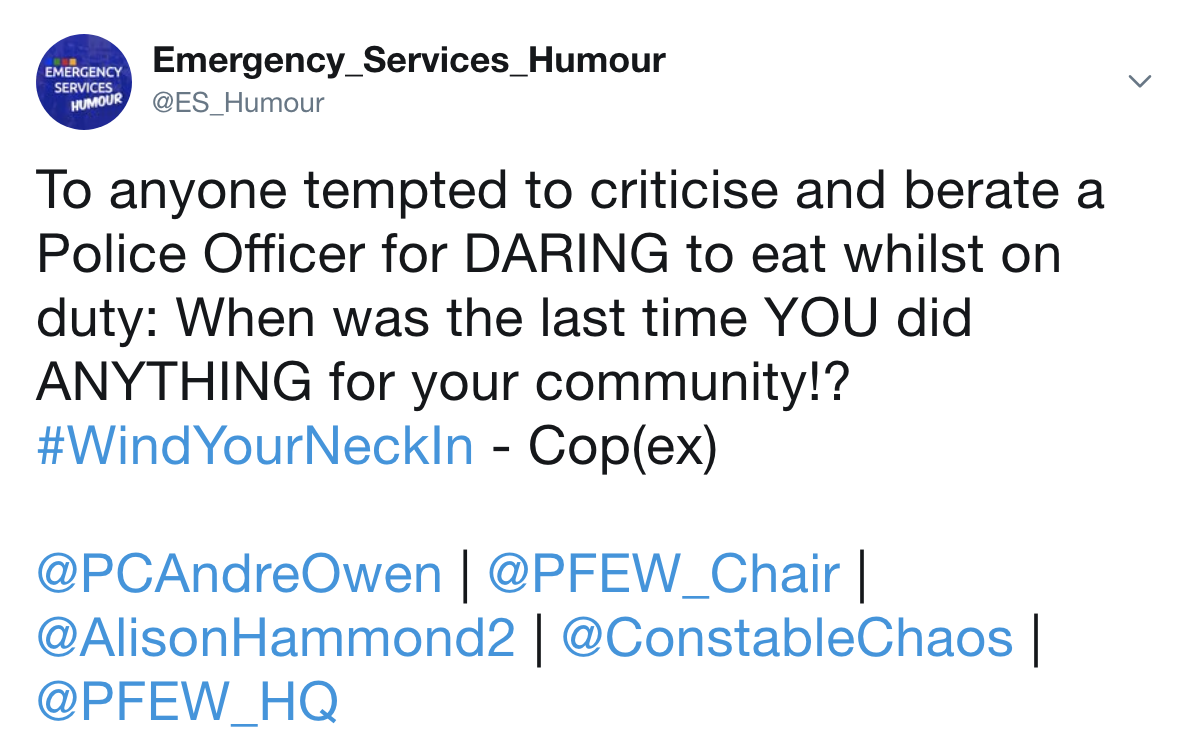 It should be obvious to any decent-minded person, that members of the emergency services are entitled to eat whilst on duty!

Only someone with very few brain cells would think that every single minute of a 12 hour shift (all 720 of them) should be spent hunting for criminals.

Perhaps individuals such as the woman that approached PC Owen have been hoodwinked by some sections of the civilian press who spout their anti-police agenda?

But rather than moaning to Police Officers who are trying to have a quick break, the numpties who always moan when they see the Police having a rare moment of downtime should have the bottle, bravery and selflessness needed to join the emergency services themselves so that they can HELP in the fight against crime, rather than berate those entrusted to do so.

You have got to be a seriously delusional individual to believe that Police Officers MUST spend every single minute of a 12 hour shift “hunting criminals”.

We really wish that people like that would just wind their necks in!

Needless to say, that the ‘woman’ who scolded the Officer for daring to eat food whilst on shift, will be recognised for her own silliness in the next issue of our subscriber-only eMagazine, S__ts & Giggles.

On a moment of positivity, my colleagues and I often would get kind and caring members of the public offer to pay for our food whilst we were on duty (Met Police).

So there are decent people out there, despite silly individuals such as the lady that gave PC Owen a telling off for eating!