In between dealing with emergency and non-emergency police-related calls, you would be amazed at what the average response officer witnesses when going about their duties.

Often, the only real ‘down time’ you get as a response team officer, is actually whilst travelling from one call to another.

And sometimes, during your travels, you get to help people out who find themselves in a bit of a ‘situation’ where ordinarily, the police would not get called.

PC Mark Wood, from Lincolnshire Police, today found himself in just one of those situations.

“PC Mark Wood came across a broken down car at Swinderby roundabout.

“The occupants were newlyweds on their way to their own reception.

“It was PC Wood’s pleasure to deliver them to their surprised waiting guests at Hill Holt Wood.”

Anyone who has gone through the pleasure of getting married will usually tell you that the day on which they got married, was one of the best days of their lives. 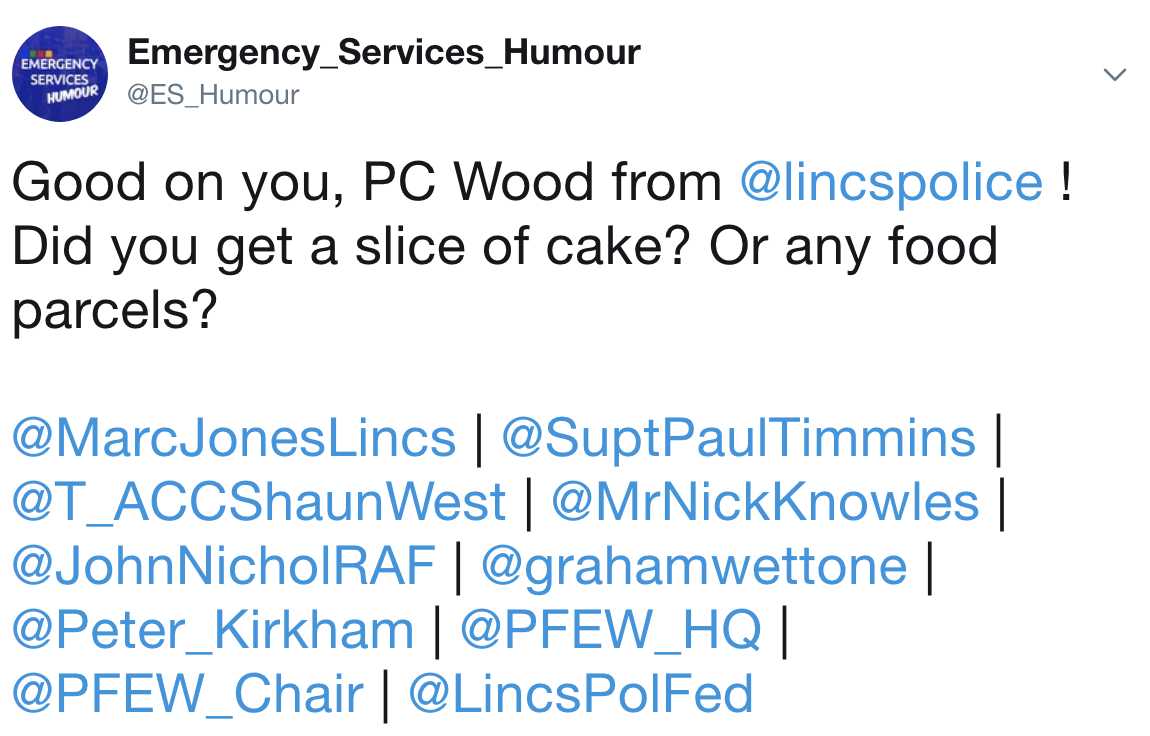 So when the ‘unexpected’ happens, in this case, your car breaks down whilst en-route back to the wedding reception, then ANY help that can get you back on track is highly appreciated.

Of course, PC Wood did not have to stop. He would of been under no obligation to do so. And yet, he DID stop because, as is the case with 99.9% of police officers, they (police officers) love to help people out.

It’s just a shame that many sections of the mainstream media tend to ignore, forget or just not see stories such as this one.

And before the usual legions of people come forward declaring that, they too, are going to ‘flag down a police car for a lift’ or start moaning about ‘their’ taxpayers money being used in scenarios such as these, then perhaps we can draw your attention to the fact that the cost and time involved in this helpful act, is/was negligible.

Instead of making such nonsensical statements and whimsical demands, why not instead just rejoice in the fact that the police not only fight crime, catch criminals and help the public during their darkest moments, but they will often help you out when you are least expecting it.

Just as long as you are a nice and polite person and don’t start telling them that you ‘pay they wages’ because, as a citizen of the UK, then we all agree to contribute to the pot, so to speak, so that we can live in (relative) peace.

Stories such as this one also just go to show, that 99.99% of police officers ARE approachable and will often do their utmost to try and help you out, should you get yourself into a bit of a situation.

The team here at Emergency-Services.News and Emergency Services Humour wish the newly-weds a very enjoyable honeymoon as well as a long and happy marriage.

Hopefully, the police car was not full of empty evidence bags and discarded breathalyzer tubes and the back seats weren’t covered in hot chocolate spillages from too many corners taken too fast whilst on a night shift