Just when you thought that you would be coming to the end of a very long and a very busy nightshift, when, out of the blue, a drink driver ploughs into your vehicle.

That is exactly what happened to two Metropolitan Police Officers as they were nearing the end of their shift.

“5.30am Saturday morning Response Officers are looking forward to the end of a busy night shift.

“A driver under the influence of alcohol has ploughed into the patrol car.

“FACT: Any amount of alcohol will affect you ability to drive THINK: Don’t drink and drive SC”

@MPSEnfiled confirmed in a later tweet that two officers were in the vehicle when it was hit, but that the injuries sustained by the officers were not thought to be serious.

Photos shared by MPS Enfield show an immediate response vehicle with extensive off-side damage with the front off-side of the vehicle completely ripped off by the impact.

It is not known at this stage what happened to the driver of the vehicle that hit the police car or whether the drink driver made off from the scene.

Many people took to twitter in order to send their well-wishes to the officers that were injured with their shock at just how much damage had been caused to the police car evident in their tweets. 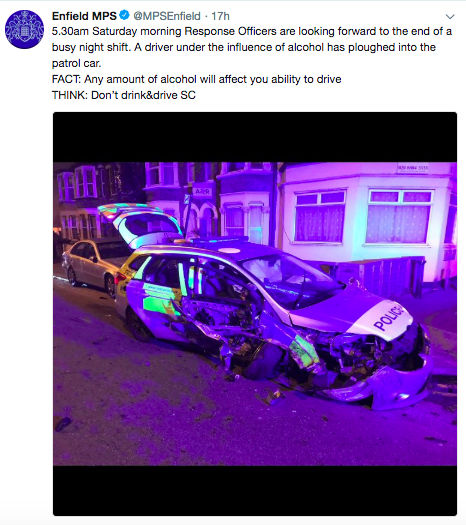 The following information on the DrinkAware.co.uk just goes to show how badly affected your reactions become after you get behind the wheel having had too much to drink:

Many of the functions that we depend on to drive safely are affected when we drink alcohol:

You can also experience blurred and double vision, which affects your ability to see things clearly while you are driving.

And you’re more likely to take potentially dangerous risks because you can act on urges you normally repress.’

In most other European countries, the limit is less, usually 50 milligrammes per 100 millilitres of blood.