A paramedic, without any regard for their own safety, jumped into the frigid sea off of Torbay in order to save the life of someone who was struggling in the choppy water.

The Coastguard and local RNLI volunteers attended the scene and helped guide the paramedic and the casualty back to shore in the early hours of Thursday morning.

The incident occurred next to the Princess Pier in Torquay after members of the public reported to the emergency services that a person was in the water.

Lifeboat volunteers along with the Torbay Coastguard carried out a search of the area in order to make sure that there were no other casualties in the water.

The casualty was taken to a nearby hospital and is thought to be making a good recovery. It is not clear as to how the individual ended up in the water during the early hours, but their life has almost certainly been saved thanks to the quick-thinking and incredibly brave South Western Ambulance Service paramedic.

‘We were woken this morning by Maritime and Coastguard Agency to a person in the water at Princess Pier, RNLITorbay were also tasked.

‘A paramedic had jumped into the water with a life ring to assist the casualty, team members guided them to the steps as they swam back to safety.

‘A search was carried out to check no one else was in the water. The casualty was taken to hospital by South Western Ambulance Service NHS Foundation Trust.

‘Remember in a coastal emergency, if it’s at Sea, Beach, Harbour, Coastal Path or Tidal River. DIAL 999 AND ASK FOR THE COASTGUARD’.

‘Who was the paramedic, what a hero! Well done to the RLNI [RNLI] and NHS. Agreed this is a dangerous bit of water now, after the pier steps have bee[n] removed.’

‘Dangerous spot, no way out all the way from Abbey Sands to inside the harbour’.

The area is covered by South Western Ambulance Service NHS Foundation Trust, but we couldn’t find any posts on their Facebook page relating to the incident.

It certainly takes a huge amount of bottle to pluck up the courage to jump into a dark and unpredictable sea, without any drysuit/life vest, in order to try and prevent someone from disappearing under the waves.

Not least because casualties who are in the water and who are struggling to stay afloat will often ‘grab’ the first person who comes to save them out of sheer desperation and panic, which can often result in tragic consequences.

There is also the risk that, when jumping into the sea from the coast line, that then the paramedic could have hit a submerged/hidden object – so, as mentioned above, it takes a lot of courage to jump into the unknown. 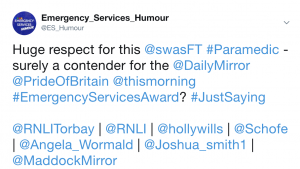 Surely this Paramedic, whoever he/she is, is a contender for the forthcoming Pride of Britain awards which are to be held later on this year?

We have tweeted the Pride of Britain team a copy of the link to this story and should you also want to nominate this brave paramedic, then visit the PrideOfBritain.com’s website.

There is even an ‘This Morning: Emergency Services Award’ that is specifically for any member of the emergency services who has gone ‘above-and-beyond’ in order to help save someone.

On a personal note, as someone who has volunteered for the RNLI, I am amazed that the Torbay Coastguard crew didn’t have their blue lights switched on in the featured image….

My former oppos on the sea (and land) will know what I mean….