Metropolitan Police Officers must be supported by senior officers, the public, politicians and the IOPC when they carry out stops on moped riding criminals – whatever tactics are used according to a statement released on the Met Police Federations website

Ken Marsh, Chairman of the Metropolitan Police Federation, said he remains extremely concerned that officer’s livelihoods and liberty remain at risk should they knock a suspect off a bike and a person is injured.

That’s despite the Met’s very public push on demonstrating the tactics used to stop moped crime.

The Met recently published footage of officers knocking suspected criminals off scooters, promoting that it has cut scooter crime by 36% this year.

However, Ken has reminded colleagues to act with caution and concern – regardless of the training they have received – when using this tactic. And regardless of whether suspects are wearing helmets or not.

“I have seen nothing yet about how our colleagues will be protected when the worst happens,” said Ken.

“Thankfully in all the examples we have seen so far, there has not been a serious injury to a suspect.

“We need the senior management of the Metropolitan Police and the Independent Office for Police Conduct to please explain that when this does happen – and it will – what position my colleagues will find themselves in?

“Will they be backed? Or will they be left to the mercy of the courts? Will their livelihood and liberty be put at risk? Because that is the reality. And our major concern.”

The vast majority of people have backed the decision of the Met to use more ‘tactical’ options when trying to catch individuals who flee from the police on motorbikes which are usually stolen.

“It is a massive ask for our members. Officers have to carry out a dynamic risk assessment straight away and are having to make that split-second decision, do I pursue that individual and what are the consequences that are going to come from that for me?

“Remember they could face investigation if a suspect is injured during a pursuit – even if my colleagues do not make any contact with their bike. Just by launching the pursuit, police officers take a risk.

“There need to be protections around this afforded to our colleagues – both in law, from the force and with public, political and media opinion. They are doing nothing more than their jobs, trying to apprehend someone who, nine times out of 10, has committed a horrendous offence.

“They must be backed.”

“Our colleagues need assistance from politicians to put the legislation in place to ensure they are not prosecuted for doing their job.

“If things go wrong, it is quite clear from previous experience that this can happen.

“There is a lot of public support for what our members are facing and the actions they carry out and the Independent Office for Police Conduct need to realise this.

“They are meant to operate in the public interest too – and I wonder how they would think if they had been a victim of a moped criminal?”

The only politician who seems to have spoken out against this tactic of being more ‘hands on’ with the individuals who are using mopeds to escape from the Police, is the Shadow Home Secretary Diane Abbott.

“It shouldn’t be legal for anyone. Police are not above the law”.

The point that Ms Abbott seems to be missing here, is that the police are expected to uphold the law and this means stopping suspects from getting away from the police.

When somebody decides to fail to stop for the police whilst riding a moped, then they are making the conscious decision to dice with death.

Would the opinion of people like Ms Abbott change if she or any of her loved ones became the victim of a crime at the hands of someone on a moped?

It would seem fairly plausible that Ms Abbott, and anyone else who does not agree with this tactic, would demand that the police did more if one of their loved ones became a victim of moped-enabled crime…

It seems that some people just disagree for the sake of disagreeing in order to score points with people who just think that there is no need for a police forces.

‘head’ and ‘sand’ springs to mind. 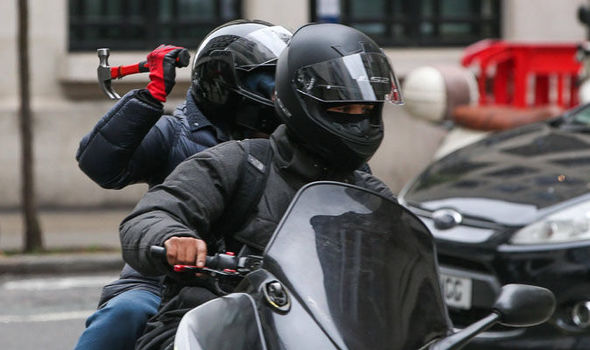