A highly-trained Met Police Driver is under investigation after preventing a suspect from evading the police on his motorbike by using a tactical maneuver that ended up with the motorcyclist coming off of his bike.

A decision by the CPS as to whether the officer will face criminal charges is expected to be made in the next few weeks.

The news of this investigation comes at a time when the Met has endorsed the use of this tactic by specially trained advanced drivers who are confronted with often violent and determined suspects who attempt to escape from the police.

The male in question suffered head injuries and a broken foot after failing to stop for the police when required to do so.

The male was NOT wearing a helmet at the time and he later pleaded guilty to a plethora of various offences.

The Officer concerned is understood to be the first to face prosecution after using the tactical maneuver that is often the only way of preventing serious criminals from fleeing from the police.

Often such individuals will take their crash helmets off during a pursuit, owing to the fact that they know that the police will not be ‘allowed’ to continue to pursue them meaning that, in the majority of cases, the suspect will get away.

This situation has led to more and more suspects taking to two wheels simply because they know that they can, in effect, get away with committing whatever crime they choose to become involved in.

The Met adopted the tactic in October owing to the sheer number of violent incidents involving suspects on motorbikes who were able to get away from the police simply by removing their helmets during a pursuit.

Officers have been cautious to use the tactic owing to the fear of their being dragged through the legal system for simply doing their jobs. 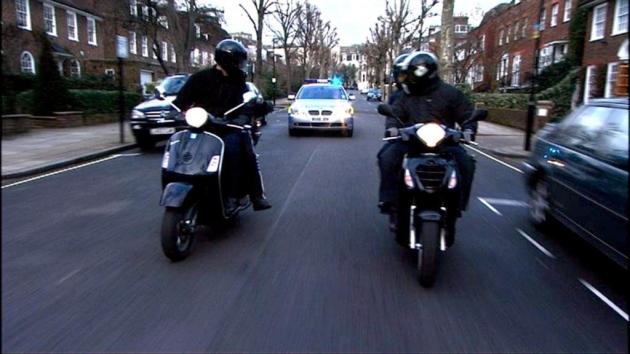 The prime minister and home secretary have both supported the tactic but others such as the shadow home secretary, Diane Abbott, have expressed concern.

Whenever we have covered this story regarding the use of this tactic by the police, then there is always an overwhelming show of support from the general public in the use of this ‘intervention’ technique when suspects decide to not stop for the police.

The incident happened on November 2017 in Erith, south-east London, not far from the border between the capital and Kent.

The police officer has been interviewed under caution as part of an investigation by the Independent Office for Police Conduct (IPOC).

The IPOC said it would decide within weeks whether the officer should be referred to the CPS.

The Officer has also been told that he now faces a disciplinary investigation for potential misconduct.

Police Officers, as well as ourselves, will be watching this case closely.

At a time when officers are being asked to put their own safety at risk in order to stop suspects from getting away, then the outcome of this case could mean that officers refuse to use this tactic.

This situation would be a ‘win win’ for anyone thinking about committing a crime who also has access to a motorbike or, as in most cases, simply decides to steal one.

Let’s hope that common sense comes into play and that this officer is not punished for doing a job that he is sworn by the Government to do.