Scott SPURLING had been watching the England Vs Croatia football match at the AllStars Bar in Weston-Super-Mare on 11th July before he got into a fight outside of the bar just before 22:00 hrs.

SPURLING first punched a 57-year-old male, Ron Ganfield, who used to be a premier league match official, after Ganfield tried to pull SPURLING away from the altercation.

Spotting the fight, PS David Williams from the Avon & Somerset mounted police division, attempted to disperse and break up the crowd with his police horse ‘Quantock’ using a tactic known as the ‘leg yield’.

However, as Quantock started to get into position, SPURLING decided to punch the horse on the left side of its head as only a coward would/could (see video of the incident below).

You have got to be a coward to take an unprovoked swipe at any animal, not just a police horse and thus SPURLING certainly comes under this category. I am sure that many of our readers, both civilian and emergency services personnel, will agree.

During proceedings, the Court was told that SPURLING was heard to “cheer” after hitting the police horse.

Just what he was so proud of is anyone’s guess, but there is absolutely nothing to be ‘proud’ of when it comes to striking, in this case, a police horse.

Not content with assaulting the police horse by punching it in the side of its head, SPURLING then decided that he was also going to punch the Police Officer, PC Mark Hodder, who tried to arrest the thug following the incident. 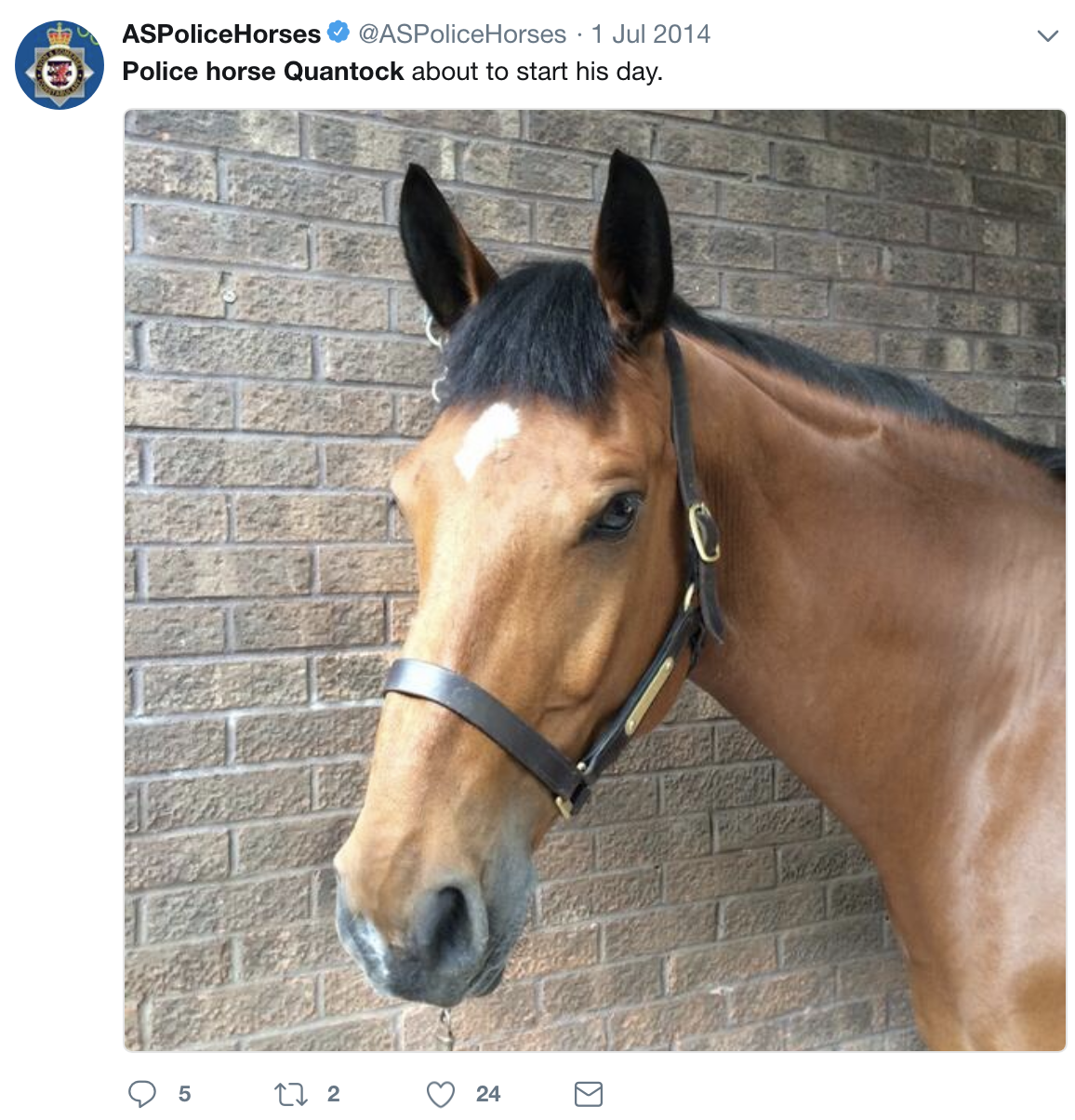 During the subsequent struggle, SPURLING was taken to the ground and restrained by officers.

He was also later charged with assaulting a police officer as well as with ‘beating and causing unnecessary suffering to a protected animal’.

“We accept that any physical contact of that nature with an animal is going to cause unnecessary suffering. There wasn’t any injury.”

Just how anyone was able to establish that the police horse was not ‘injured’ is beyond me. It’s been a while since I was in uniform, but last time I visited the stables of my local mounted branch, none of the horses could speak to humans.

“There may have been a psychological impact on the horse but he is described as being well the following day and grazing in the paddock.”

Now, I consider myself to be somewhat of an animal lover and I am pretty sure that this majestic and intelligent police horse, when confronted with this buffoon and his fist, probably was not ‘ok’ having taken a punch to the head.

Of course the horse will continue to graze! It’s natural instinct to survive will mean that if it does not eat, then it could die! How can the fact that Quantock was eating mean that he was ‘ok’!?

But that is, of course, just my own humble opinion. 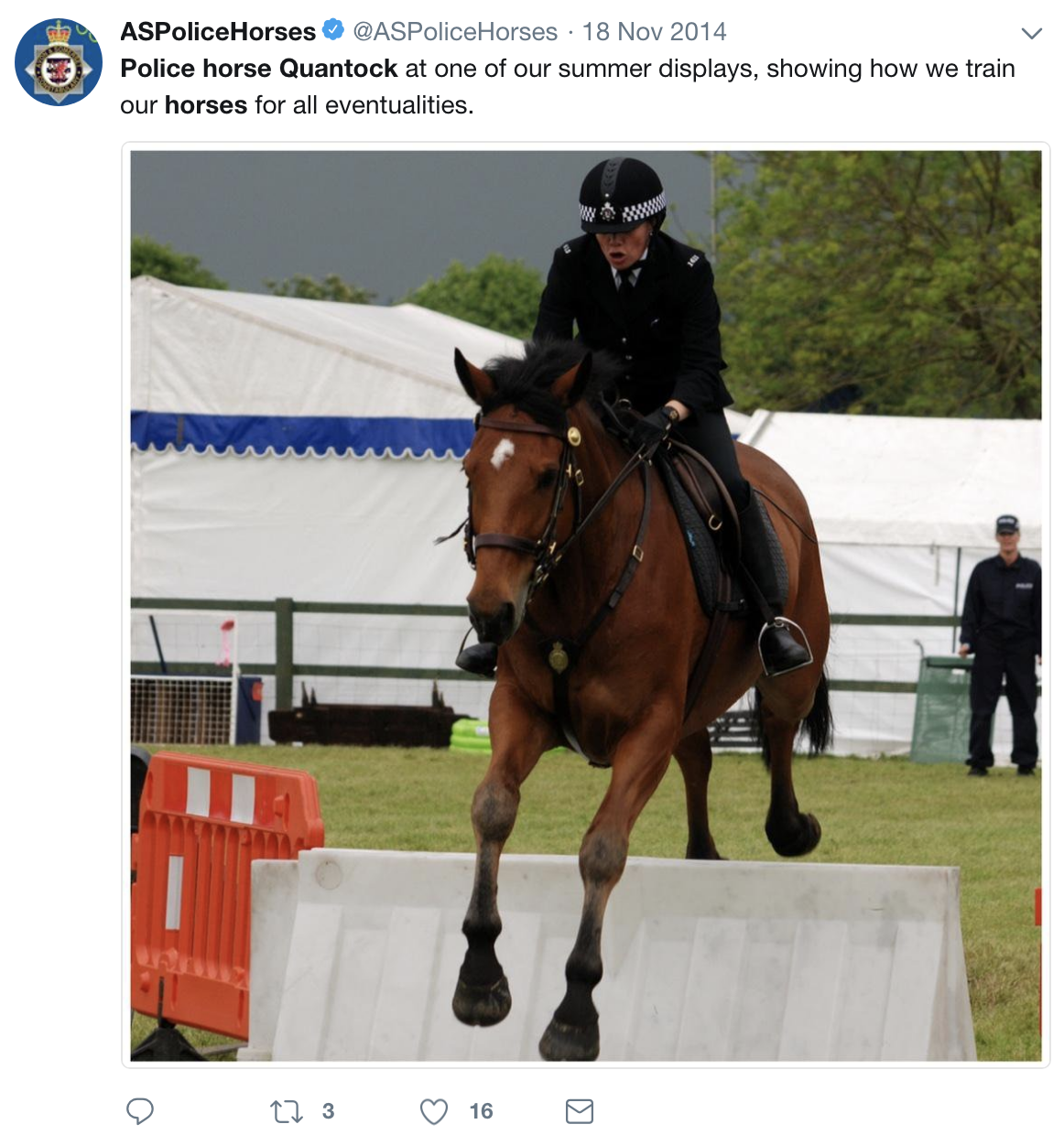 Ms Cameron said Spurling had felt he was in danger of being trampled by the horse after seeing them being used in other public order situations.

Strange that though isn’t it, as most intelligent people with a good bit of decency, upon seeing a police horse trying to maintain crowd control, will get out of its way. Having seen the video below, then I cannot understand how SPURLING thought he was going to be trampled when he is clearly seen stepping towards the horse and not away from it!?

You don’t hear of many people punching police horses in the side of the head in similar situations, because most people know that it’s best to walk away from a horse rather than to step towards it and punch the horse in the head!

And if you felt threatened, why would you then ‘cheer’ having punched the horse in the side of the head!? Sounds to me like ‘Bravo Sierra’.

Ms Cameron added: “I’m not saying the horse deserved to be punched but what I am saying is if you are using an animal in crowd control, perhaps that’s going to happen.”

Well, here is the video, so our readers can judge for themselves (let us know what you think in the comments below)

I am going to stick my neck out here and say that punching a police horse SHOULD NOT HAPPEN and DOES NOT NEED to happen!

When was the last time you ended up feeling ‘threatened’ by a police horse?

If you are a law abiding citizen and have enough intelligence to understand when a crowd is getting out of control, then most sensible and decent people will move away from that situation i.e. the crowd.

Only a complete fool would think that punching a horse in the side of its head is going to ‘protect’ you from the horse! So what, the horse is going to run away because it’s been punched by a feral human being? I think not!

Perhaps worthy of note, is the fact that an article published on the Bristol Post website dated 13th July 2018 states that: “Police horse Quantock was punched three times”.

Spurling admitted the three charges – and on Thursday, he was sentenced by North Somerset Magistrates’ Court to a 10-week community order.

During this period, he will have to abide by a curfew from 7pm to 7am.

He was also ordered to pay £500 compensation to Mr Ganfield at a rate of £10 per week.

I am not sure about you, but I think that a more suitable punishment for SPURLING would perhaps involve him mucking out horse stables for a period of time sufficient enough for him to realise that it is not ‘ok’ to go around punching police horses.

Just like it is not ‘ok’ to punch people who are trying to help you.

Just like it is not ‘ok’ to assault police officers.

Are you starting to notice a theme here, because I certainly aim!

For anyone not aware, then a community order is: a non-custodial sentence which requires an offender to perform community service, observe a curfew, undergo treatment for drug or alcohol addiction, etc., instead of going to prison.

Many of our readers will be disgusted by the action’s of SPURLING and we share that sense of disgust with you all. Isn’t it a shame that police horses can’t be trained to bite feral human beings who attack them?