An article on the LeicesterMercury.co.uk website has reported how a motorcyclist who rode dangerously towards a police officer and who ended up repeatedly kicking the officer in the face has been given a “final chance” by a Judge.

Many will see this ‘final chance’ as yet another kick in the face for the officer who was repeatedly violated by the male owing to the males aggressive actions.

And many more will wonder as to why a tougher stance was not taken; especially in the wake of the Assaults On Emergency Services (Workers) Bill that has recently made it on to the statute books.

Jake Cunnington IGNORED street signs and multiple red lights as he dangerously and selfishly rode around the city centre on a motorbike, without wearing a helmet.

Cunnington  even thought that it was a great idea to make a temporary stop in order to take a picture on his mobile.

If you think that Cunnington was just engaging in some harmless fun, then you need to stop and consider how you would have felt if Cunnington would have hit a member of your family during his rampage.

Police were alerted to the incident, but did not engage Cunnington in a pursuit.

It was reported that Cunnington was not travelling at excessive speed, but that he was overtaking rows of cars on the opposite side of the road as well as failing to give way when required to do so.

If these numpties who want to drive around like maniacs without a helmet on get injured, then that’s fine – but don’t put innocent members of the public’s lives at risk and don’t assault police officers who will try to stop you from breaking the law!

Officers caught up with Cunnington when he came to a stop on a grass verge in Heathcott Road, Saffron Lane, Leicester, at around 11000 hours on Sunday 1st July.

Priya Bakshi, prosecuting, said: “PC Christopher Hall got out of the patrol car to speak to him and there were members of the public and children in the vicinity.

“The defendant revved the motorcycle engine and rode towards the officer, causing him to fear for his safety, as if he was going to be run over.

“The officer pulled him off the bike and they went to the ground.” 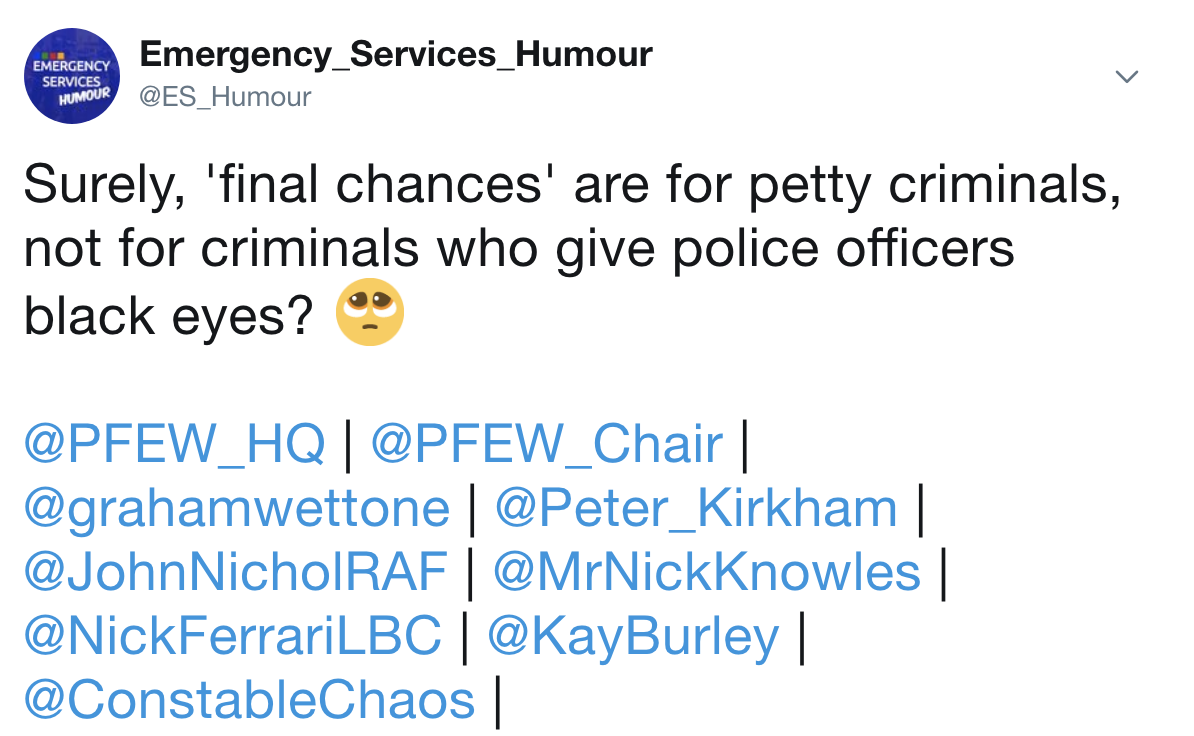 Miss Bakshi said the defendant was still revving the bike’s engine and the officer feared being injured from the bike chain, which was close to his head, and pushed the vehicle away.

She said: “The defendant kicked PC Hall on the face a number of times.”

Another officer used a Taser to restrain Cunnington.

Recorder David Herbert QC told Cunnington he was “within a whisker” of going to prison – but that he would not be locking the defendant up.

He told Cunnington: “You need to understand you’re within a whisker of receiving an immediate custodial sentence.

“You rode towards a police officer causing risk to him.

“He had the presence of mind to pull you from the motorcycle.

“You continued to rev the engine and went on to kick the officer in the face repeatedly to try and escape.

“I’ve seen photographs of the injuries to Pc Hall; bruises, cuts and scratches to his face and body.

“It’s aggravated by your previous convictions when you failed to stop and drove dangerously in 2015.

“So it seems you’ve done similar before, albeit without the violence.”

Recorder Herbert said that because of Cunnington’s age and personal circumstances, he was suspending the sentence.

But surely, we ALL have our own personal circumstances which we have to deal with, but how many of us jump onto a motorbike, tear up a city centre and then assault a police officer?

Recorder Herbert added: “If you’re foolish enough to drive again, whether in a car or motorbike, you’ll go to prison.

“This is, in all likelihood, the last chance any court will ever give you.”

Cunnington, of Monmouth Drive, Glen Parva, was given a 12 month detention sentence, suspended for two years, and ordered to do 150 hours of unpaid work.

He was banned from driving for two years and placed on a three month 9pm – 6am curfew.

Cunnington was ordered to pay £500 compensation to Pc Hall, and £500 court costs.

However, as is often the case when members of the emergency services are ‘awarded’ compensation, it is unlikely that the officer who Cunnington assaulted will ever see a penny.

Cunnington admitted dangerously riding a trials bike, assaulting a police officer, riding otherwise in accordance with a driving licence, having no insurance or protective headgear and not having a valid MOT certificate.

Jonathan Eley, mitigating, said Cunnington had a partner and 18-month-old daughter, he was working as an electrician’s mate with good prospects.

He said: “He wasn’t driving at the officer, he was trying to get away.

“When he, the officer and the bike all ended up on the ground, that’s when he kicked the officer’s face.

“He regrets that and apologises through me.

“He bought the bike to do up and re-sell and decided to take it for a test drive.

“It was a decision he deeply regrets; he’s ended up here as a result of that foolish short-sighted decision.”

Probation officer Peter Eden in a verbal report to the court said: “I’ve spoken with him and he’s remorseful for his actions and realises he should have stayed where he was when the police arrived, but he panicked.

“He says he’s very embarrassed and realises he’s been a complete and utter fool and asks the court to give him a chance.”

Time and time again, we hear about how defendants in these sort of cases state, through their solicitors, how they ‘made a mistake’ and how they realise the ‘error of their ways’.

Really? Well, in this example, Cunnington clearly did not learn the error of his ways because of his previous history.

In fact, he seems to have embarked upon a course of conduct that has deteriorated since his first offences.

Rather than being at home with her, or taking her down the park, Cunnington decided to cause havoc in his local city centre and assault a police officer.

What chance does his daughter have to learn any decent morals when, clearly, by the very virtue of his actions, such morals are missing from the mind of her Father?

What a sad society we live in.