Male Who Legged It From The Police Gets A Surprise After Dropping His Phone During The Pursuit….Or Did He?

So it turns out, that Mr Kenningtons mate pulled a prank on him. And that one of his mates sent the pic into us, in the hope that we would share it.

Fair play. Touche – we enjoy a bit of skylarking as much as the next person. It still leaves the questions though: Did Mr Kennington manage to sell his motor?

‘It looks like Mr Kennington has some cheeky friends, who have used an old photograph of our colleagues at Norfolk Police to play a prank on him.

‘While they’re technically impersonating a police officer, which is a criminal offence, on this occasion I think we’ll let it go and hope it didn’t cause Mr Kennington too much undue distress.’

If you want to read the some of the ‘original’ blog then here it is:

A male who decided that he did not want to stop for the Police ended up getting a grinning selfie featuring the Police involved in an alleged pursuit after he apparently dropped his mobile phone during the incident.

Four response team officers from Humberside Police published the picture on Rian Kennington’s Facebook page at 0239hrs (or, as it turned out, they didn’t) on Tuesday in the hope of trying to get Mr Kennington to come and speak to them about the alleged offences.

The no-nonsense post included a caption aimed at Kennington explaining that if he wants his mobile phone back, then he would need to collect it, in person, at Scunthorpe police station.

‘What’s up Ryan, you lost your phone running 100mph from us yesterday.

‘If you want it back, come to Scunthorpe police station’. 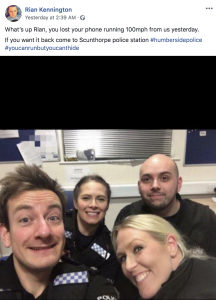 On his public profile on Facebook, in his intro, Mr Kennington describes himself as “a C**t”.

In another one of Mr Kenningtons most recent public posts, he mentions the fact that he is trying to flog a VW Golf for a grand sum of £400.

Mr Kennington also clearly has a nuance for road safety, as he also recently shared some details in relation to the location of a speed camera that was positioned outside of a local school with his followers in another public post that said:

It is expected that, with the publicity being generated by this ‘incident’, then it won’t be long before Mr Kennington is able to speak to the Police about what happened and why.

No-one wants to see other motorists driving around the streets at speeds up to 100 mph as they try to allegedly run from the Cops.

That is why it is good that the Police employ ‘unusual’ tactics in order to try and publicise the fact that they are looking for people who may not want to be found, for whatever reason.

Running from the Police is not worth risking your own life, or more importantly, the lives of innocent members of the public.