As many of our regular readers will know, we are passionate about trying to reduce the number of assaults which are inflicted upon our oppos (colleagues) who serve in the emergency services, NHS and the prison service.

We closely followed the Assault on Emergency Services (Workers) Act as it made its way through the House of Common and the House of Lords being eventually making it onto the statute books.

Let’s hope that the fact that, under this new law, the minimum sentence has now been doubled from 6 months to 12 months for anyone convicted of an offence under it, MIGHT go some way to ensuring that anyone who decides to lay a finger on our colleagues gets sent to jail.

You might wonder as to why we are so passionate about trying to ensure that our colleagues are NOT subjected to violent assaults whilst at work (really!?).

We were shocked, therefore, when we saw a tweet that had been shared on the @SurreyPoliceFed twitter account telling the story of a police officer who had been head-butted by a (then) 17-year-old male.

Unfortunately, our readers won’t be surprised that we were not shocked by the mere fact that the incident had happened in the first place.

Being the ‘go to’ ‘news’ outlet for members of the emergency services and their many, many supporters, we hear all-too-often about these nasty assaults on a daily basis.

Instead, in this particular case, we were shocked by the fact that the individual responsible for not only assaulting this police officer, but her colleague as well, was NOT sent to jail.

Instead, it would appear that he was told to go out and ‘get a job’….You could not make it up. 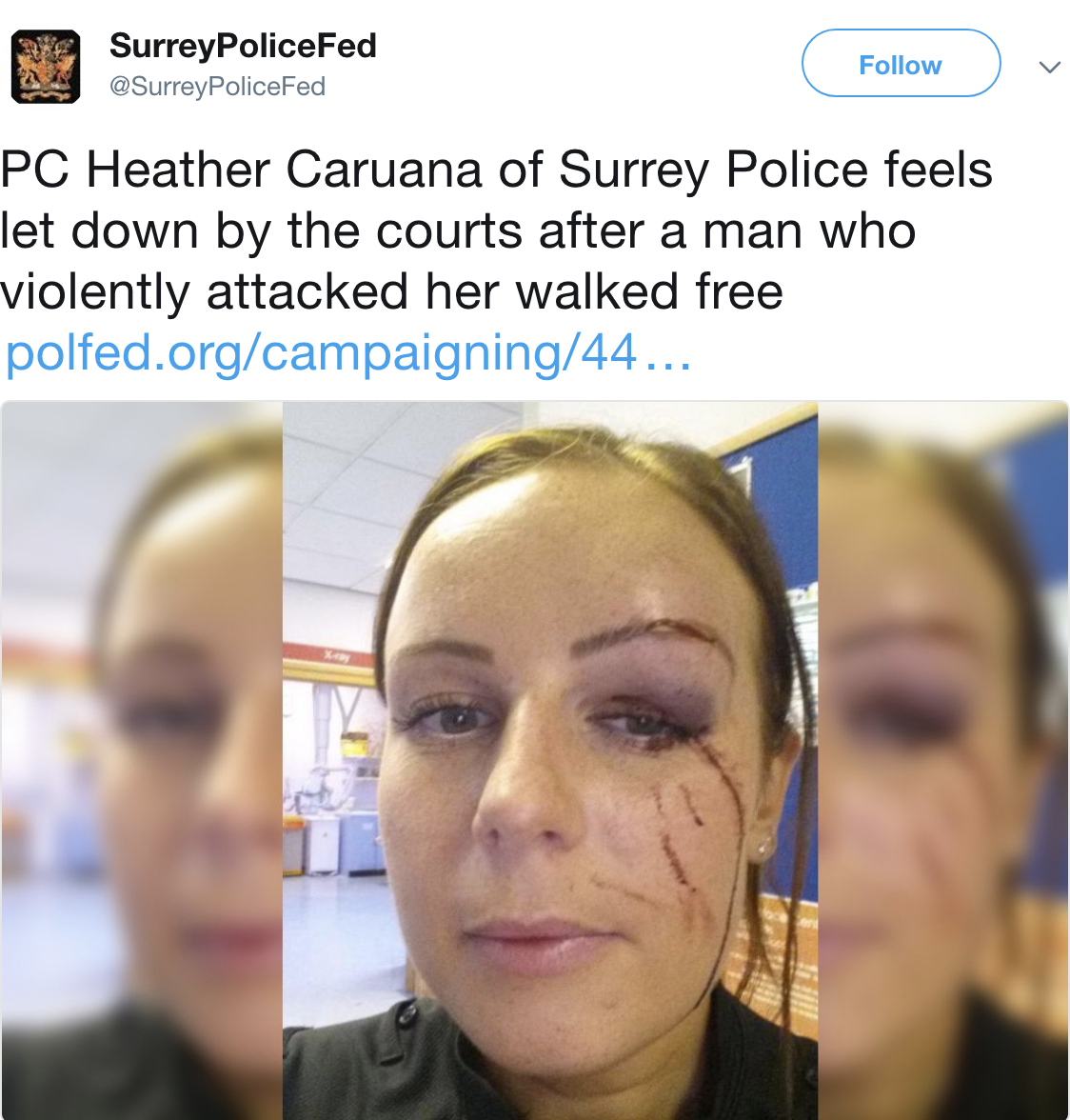 You can watch the video of PC Caruana talking about what happened below, but a short article on the PolFed.org website stated that:

“PC Caruana went to the aid of a female colleague who was struggling with the offender, who was aged 18.

“He head-butted PC Caruana above her left eye with great force.

“It felt like I had been whacked with a chair,” she said. “My colleague was in tears as he had bent her finger back.”

“PC Caruana was unable to see out of one eye for five days and now has a permanent scar.

“She was awarded just £100 and her colleague received nothing.

“The biggest thing for me is that the courts let us down so much,” she said.

It just makes no sense to me, that the very same people who the Courts, and the general public, expect to uphold the law are so badly let down when it comes to the punishment of individuals who decide to viciously assault the men and women on the thin blue line.

When a police officer gets assaulted, the person responsible for the attack is, in effect, attacking society as a whole.

We ask and expect police officers to put their lives on the line to keep us safe, yet when we have not been able to keep them safe, we fail to punish those responsible for these horrendous attacks.

Well, guess what; there are some truly nasty people out there.

The only individuals who seem to think that these truly nasty people do not exist, are the same people who have never been the victims of their evil acts.

Whether you like it or not, you need the police. If there was no police, then do you really and truly think that they who criticise, berate, assault and murder our police officers are going to be there for you when knife-wielding burglars break into your house? 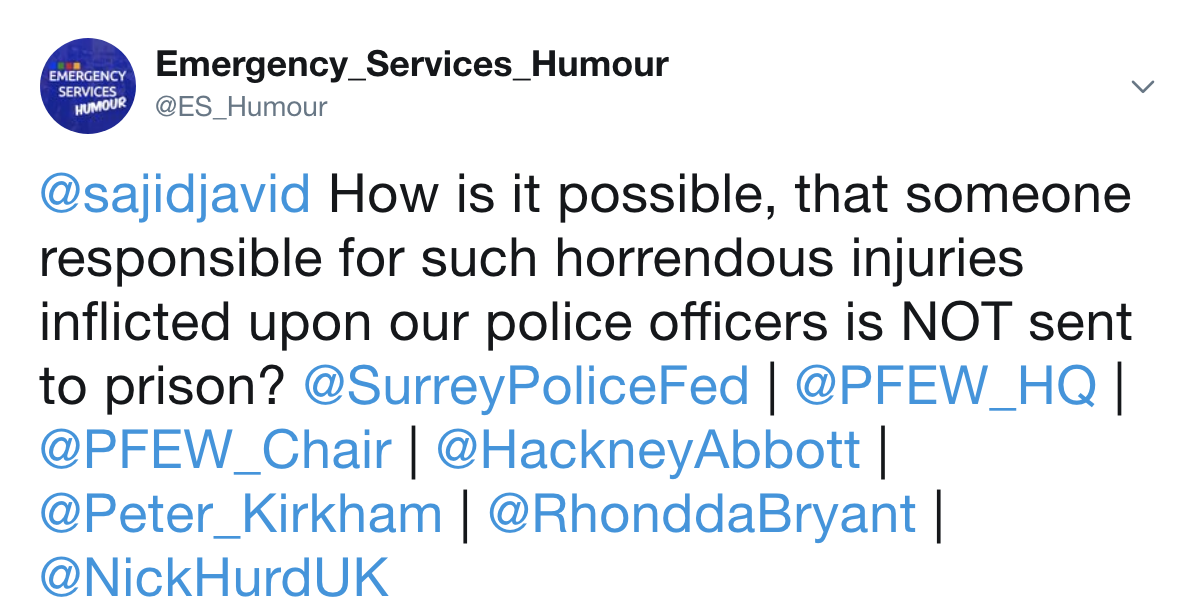 Of course they won’t. And the people who believe that they can protect themselves from such attackers have probably never been in bed at 3am in the morning when 3 knife wielding intruders burst into their bedrooms whilst their children sleep next door.

That is why we as a society, owe it to our police officers to ensure that anyone convicted of assaulting a police officer is sent to prison rather than being told to ‘get a job’.

If there are not enough prisons, then rather than sending £13 billion of taxpayers money overseas under the guise of ‘foreign aid’ then some of that money should be used to build more prisons so that more evil and dangerous people can be locked up.

The person who assaulted these two officers, should have been sent to prison. And if 12 months inside wasn’t enough to convince him to change his ways, then if he commits these sorts of crimes again, that sentenced should be set at 5 years. And then 10 years…and so on.

Yes, people do make mistakes (I am not talking about the male in this case).

But, if people do not learn by their mistakes, then that’s THEIR problem – it should not be society’s problem.

In my humble opinion, you do not need to go to university in order to understand what needs to be done in order to make our society a safer one to live in.

You need common sense and the courage to make the decisions which will ensure that nasty and evil people are kept OUT off of the streets.

The attitude towards sentencing those individuals who violently assault our colleagues MUST change.

Because until it does, then the people who have the power to make these changes, but who refuse to act, will have the blood of police officers and other members of the emergency services on their hands and in their consciences.