Unfortunately, we are now somehow used to hearing stories about police officers being verbally abused whilst dealing with incidents such as fights in the street, domestic incidents or whilst policing large events.

It is in no-way acceptable, but the chances of changing the attitudes of the individuals who see-fit to abuse the very same people they would call for help if a masked knifeman broke into their home is very slim.

But we do not often hear about incidents where the police have had to worry about or respond to thieves STEALING from their vehicles as the police deal with road traffic accidents.

But in this incident, not only did someone steal something from the police officers car, they also then decided to fight with the police once they caught him.

And yet, some people wonder why, when they call 999 and request the police, then they end up having to wait an extended period of time for the police to arrive.

It’s because, most of the time, the police are having to deal with numpties such as the Herbert who stole property from the police car. 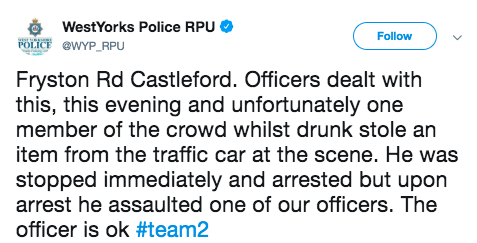 No doubt there will be some people out there who will just see this as a bit of ‘skylarking’.

But I almost guarantee that the same people who think that this fella is ‘just’ trying it on, would be the FIRST to complain about the police if they dialled 999 but then got told that there were no police units to send.

And why isn’t there always a police unit free to help you when you call 999?

It’s because they are most likely having to deal with numpties like the individual behind this attempted theft and subsequent assault on police.

You may think that it’s just the police who have to deal with thieves nicking their stuff whilst they are on the job.

Our emergency services should not have to worry about their vehicles being broken into or vandalised whilst they deal with emergencies.

What we have started to notice, however, is that more and more people (unless your name is ‘Dod‘) are starting to condemn the actions of these numpties rather than just merely laughing at them.

Could this be a sign that the collective attitude towards our police really is starting to change, despite the attempts of some ‘news’ outlets who constantly seem to only ever share negative stories about the cops?

Who knows. But we live in hope.

The majority of the people who responded to the tweet shared by the West Yorkshire Police Road Policing Unit, lambasted the actions of the numpty who stole from the officers car:

We applaud the members of the public who not only stick up for our coppers, but who also stick up for the rest of the emergency services.

Such support does not go unnoticed and most people probably do not realise just how much this support helps emergency services personnel to deal with some of the ‘tosh’ which they come up against on a daily basis.

I know when I was serving in the Metropolitan Police on a 999 response team, that the positive support ALWAYS more than made up for the negativity which you would end up encountering on a daily basis.