Let’s face it, there are some people out there who just cannot be pleased at all when it comes to other people sharing what should be uplifting and light-hearted stories.

Several days ago, A London Firefighter ( @FlaminHaystack ) shared a story on her twitter feed about her next door neighbours who, without being asked, decided to repair her fence which had recently been damaged.

Her neighbours were not asked to repair the fence – they just did it. Out of the kindness of their hearts. They didn’t want anything in return for their labour.

The tweet got a huge response from thousands of people on twitter and the story was picked up by the national press including The Sun and the Huffington Post.

‘all well and good’ you might think… Unfortunately not…

The brave firefighter, brave by the very nature and virtue of her job, has now become the victim of trolls who, for some reason, have taken it upon themselves to send hateful messages to Antonia for reasons which seem to defy logic, common sense and decency.

It would seem that these trolls, hiding behind the safety of a computer/mobile phone, have even started to send death threats to Antonia – and all because she shared a story about how her Romanian neighbours had decided to repair her fence!?

What is humanity coming to, when people think that it’s ‘right and proper’ to start trolling a brave firefighter who, if the same people were caught in a house fire, could be saved by the very same person they are trolling!?

Wouldn’t it be great if the trolls responsible for the barrage of abuse made towards our oppo, could be banned from ever being able to use the 999 system? Antonia makes no secret of her profession on her twitter profile, so the buffoons trolling her ought to know that she is a Firefighter with the London Fire Brigade.

The same London Fire Brigade that sent hundreds of brave firefighters into Grenfell Tower when the tower block was besieged by flames, without any due regard for their own safety.

And yet, we have individuals sending messages of hate to this Firefighter, just because she dared to share an uplifting story about how her neighbours helped her?!

What are these trolls trying to achieve? Do they not know that members of the emergency services have skin thicker than most people and that their tweets will (hopefully) not have the effect on this brave firefighter that their authors are hoping for?

It is shocking to think that these individuals feel they have the right to behave in such a way towards someone who routinely puts their life on the line in order to save the lives of complete strangers.

Anyone of sound mind will be totally disgusted by these tweets which have been sent to Antonia. They are a reflection as to what is still wrong with society – the harbouring of hate towards complete strangers.

Surely Twitter should/could be doing more to get rid of these charlatans?

But even when these sort of hateful and spiteful tweets, sent by cowards who hide behind keyboards ARE reported, then it would appear that, in this case, Twitter, are loathed to do anything about it.

How can this be!?

Platforms such as twitter rely, in part, on income from advertisers and I am fairly sure that most advertisers would not want their promoted tweets to appear in front of people at the same time that tweets are being shared by its users who are the victims of trolling on the very same platform that is being used to promote their brand? 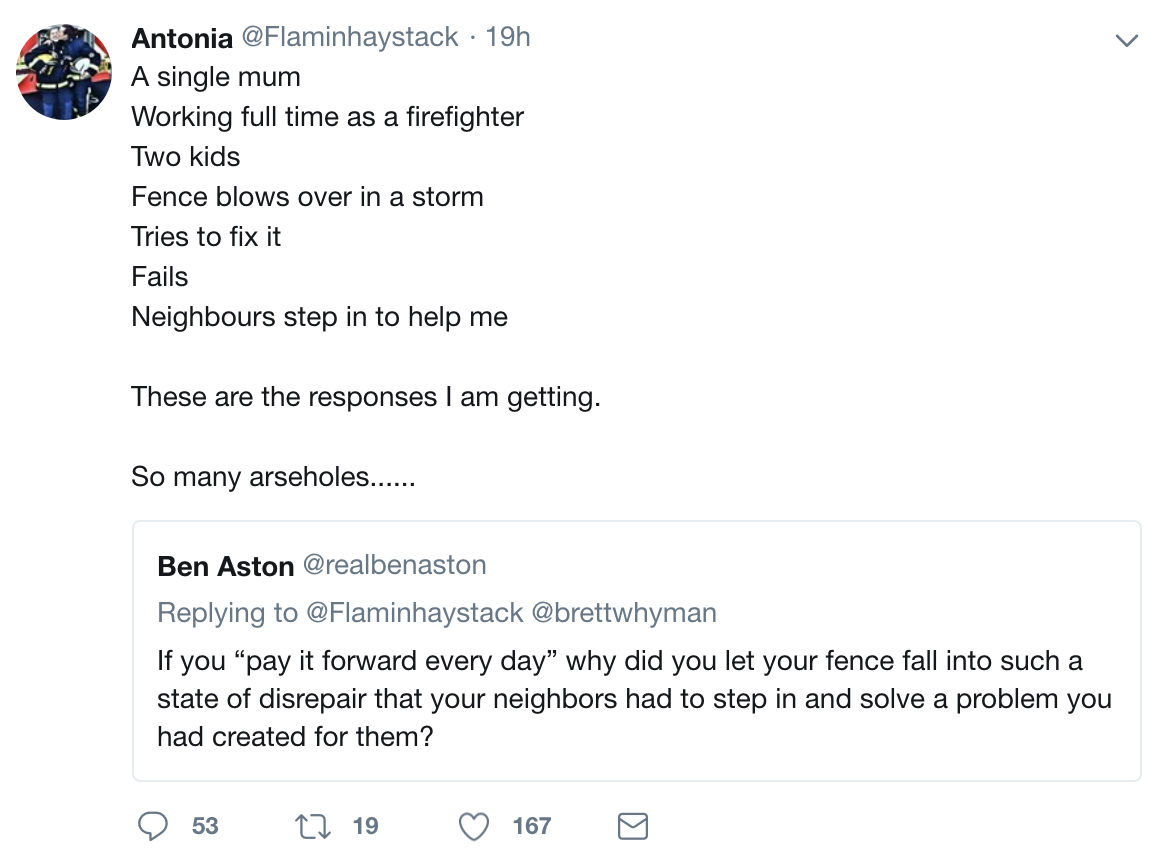 It really does also make you wonder what motivates someone to send abusive messages to a complete stranger who they have never met; not least a member of the emergency services.

What goes through the mind of someone who motivates themself to sit behind the anonymity of a computer and send hateful messages in the hope that those hateful messages are going to upset the recipient !?

Some people really do need to get a grip of their lives and sort their ***t out, otherwise they are going to end up being very lonely.

How do I know that these trolls will end up lonely? From experience! (not that I have EVER been a troll!)

During my time in the Metropolitan Police, I lost count of the amount of times that my colleagues and I would end up dealing with the sort of individual who thought that it was ‘ok’ to be nasty to their fellow human beings.

And the one thing that was the common denominator amongst these types of individual, was the fact that they would often be sat, alone, in their property without having any friends or family members to converse with.

A very sad state of affairs.

Sad insofar that these individuals are targeting a brave firefighter and sad because the people responsible for the sort of messages of hate being received by Antonia clearly have nothing better, nor more ‘exciting’, to do with the gift of life that they have been given.

To Antonia we say:

stay strong and don’t let these individuals get to you – they are cowards who obviously have an emotional void in their lives which can only be filled with hate!

you are a hero, because you risk your life to save the lives of complete strangers on a day-to-day basis!

you are a credit to this nation and we salute you (and your neighbours)!

Our regular readers won’t be surprised to learn that the trolls behind these messages will be officially recognised for their stupidity in the next issue of our eMagazine, suitably entitled ‘S__ts & Giggles’, under our ‘c__kwomble award’ section.