Firefighters have had to resort to using inflatable boats to rescue stranded residents after a large water main ruptured sending millions of gallons of water into the street.

Cars have been almost completely submerged after the flood rose up to street level and swamped surrounding roads and properties.

The huge flood in Hackney, east London, has also meant that nearby businesses have had to shut whilst the massive clean-up effort gets underway.

Earlier on this morning, the London Fire Brigade tweeted that 40 firefighters had been sent to the scene on Lea Bridge Road.

One of the brigades inflatable rescue boats was used to rescue a man from a flat and later a woman from a shop.

Local residents also took to twitter in order to share images and videos of the scene as the flood grew bigger and bigger. 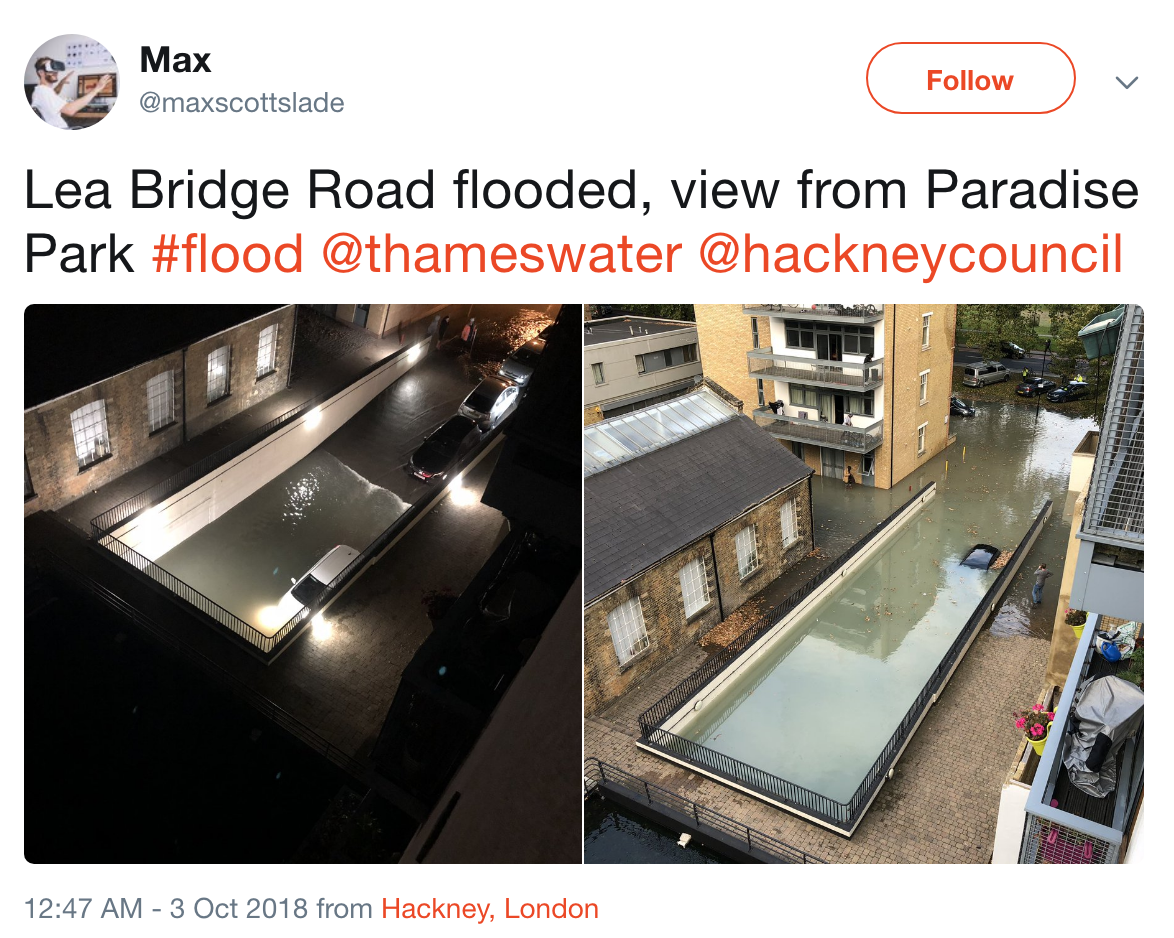 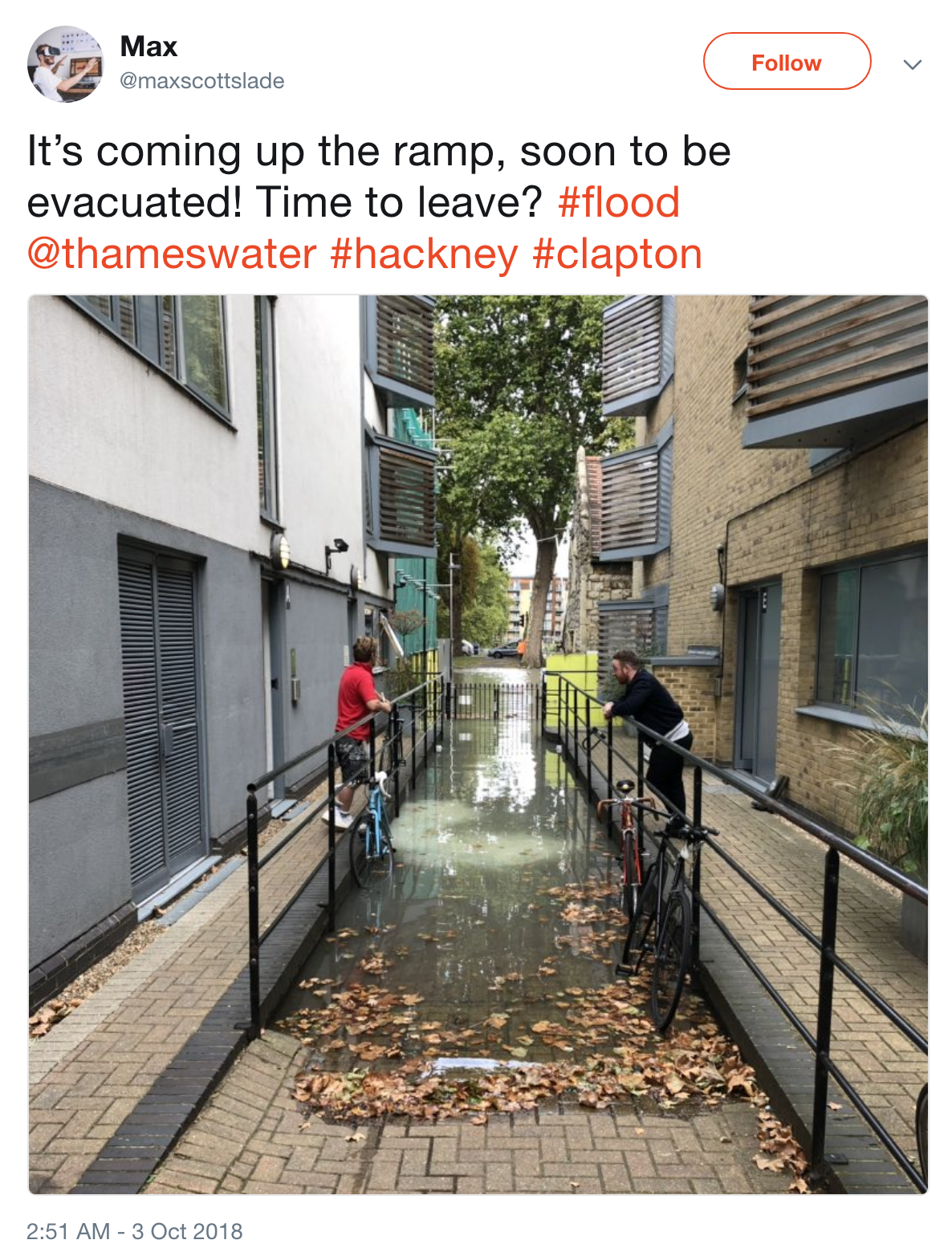 Kris Lee, whose property overlooks the flooded area, told the Hackney Gazette that the burst water main lifted part of the road, adding:

“It’s going down the steps to the pub like a waterfall.

“It’s digging up a hole under the railings.

“It started at 10pm and it’s getting worse and worse.”

Thames Water said that it was aware of the burst water main in the early hours of Wednesday morning, and added its engineers were at the scene from 3am.

They are working with police and firefighters by using pumps to remove water.

A statement on the London Fire Brigades website said:

“Firefighters are dealing with a flooding in an underground carpark on Lea Bridge Road in Hackney, E5. The flood has been caused by a burst water main. Thames Water and the police are on the scene.

“An underground car park has been completely flooded and local homes and commercial properties have been affected. Firefighters have used an inflatable boat to rescue a man from a flat and a woman from a shop. 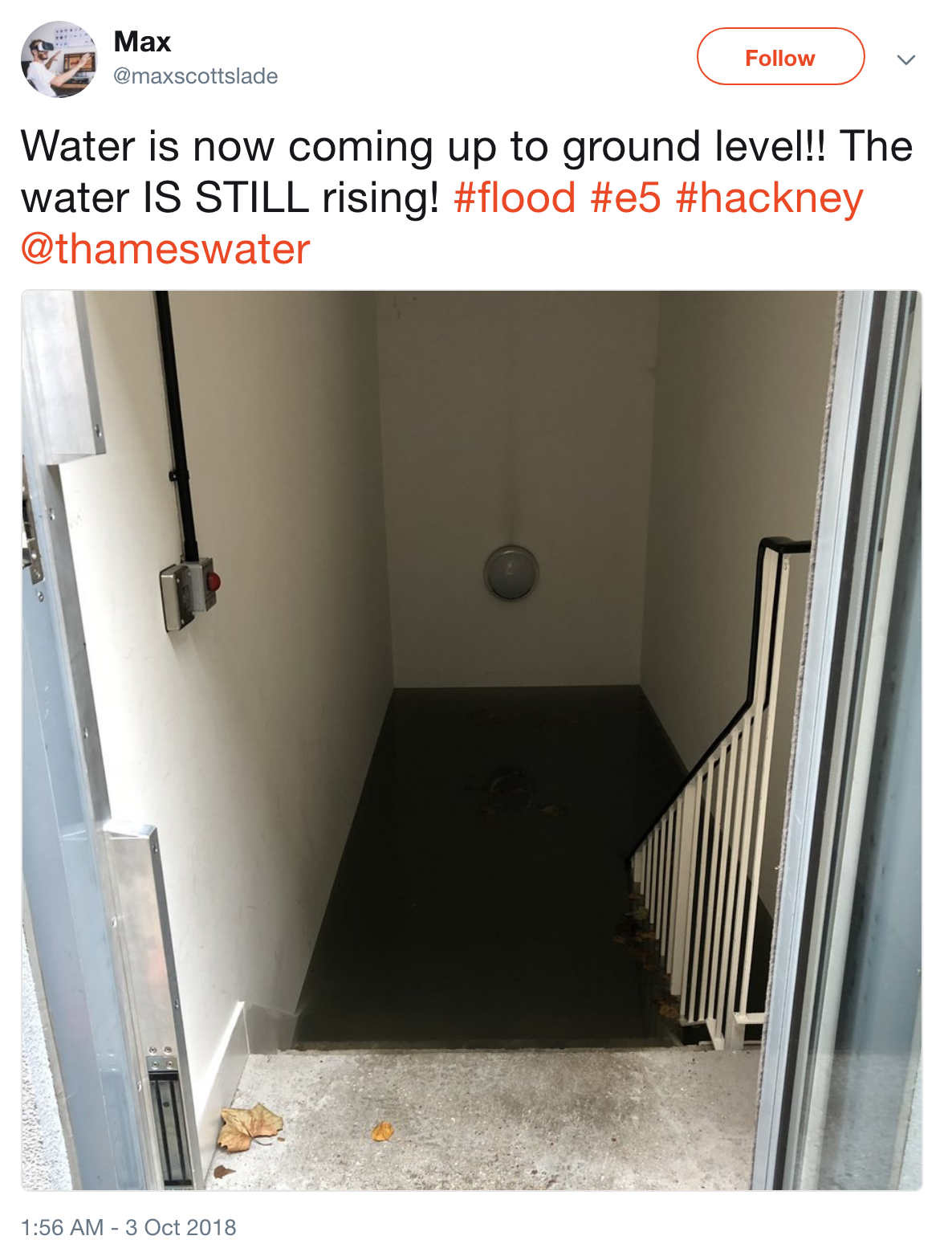 “Crews are using pumps to remove as much water as possible.”

“Firefighters are working hard to reduce the impact of the burst water main on local homes and commercial properties.

“In conjunction with Thames Water and the Environment Agency the clean water is being diverted into the River Lea. We’d ask people to avoid Lea Bridge Road and surrounding area where possible.”

Four fire engines from Homerton and Stoke Newington fire stations are at the scene.

Two fire rescue units from Bethnal Green and Euston are also at the scene. Around 40 firefighters are in attendance.

The Brigade also confirmed that it was first called at 0849. 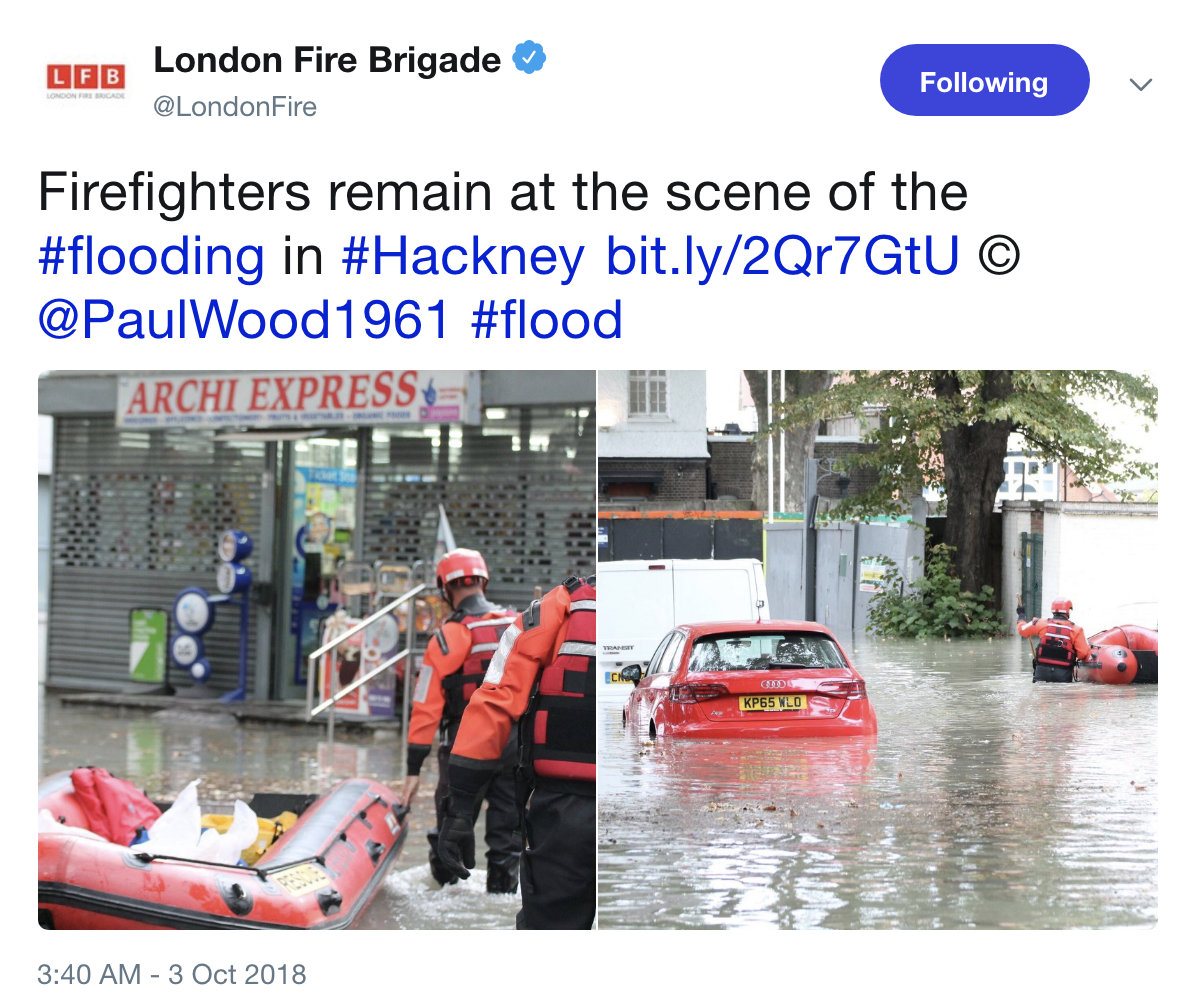 Updates have been shared regarding the situation from the @ThamesWater twitter account which reveal a chronology of how the incident unfolded from what appeared to be a relatively minor leak, into a major one: 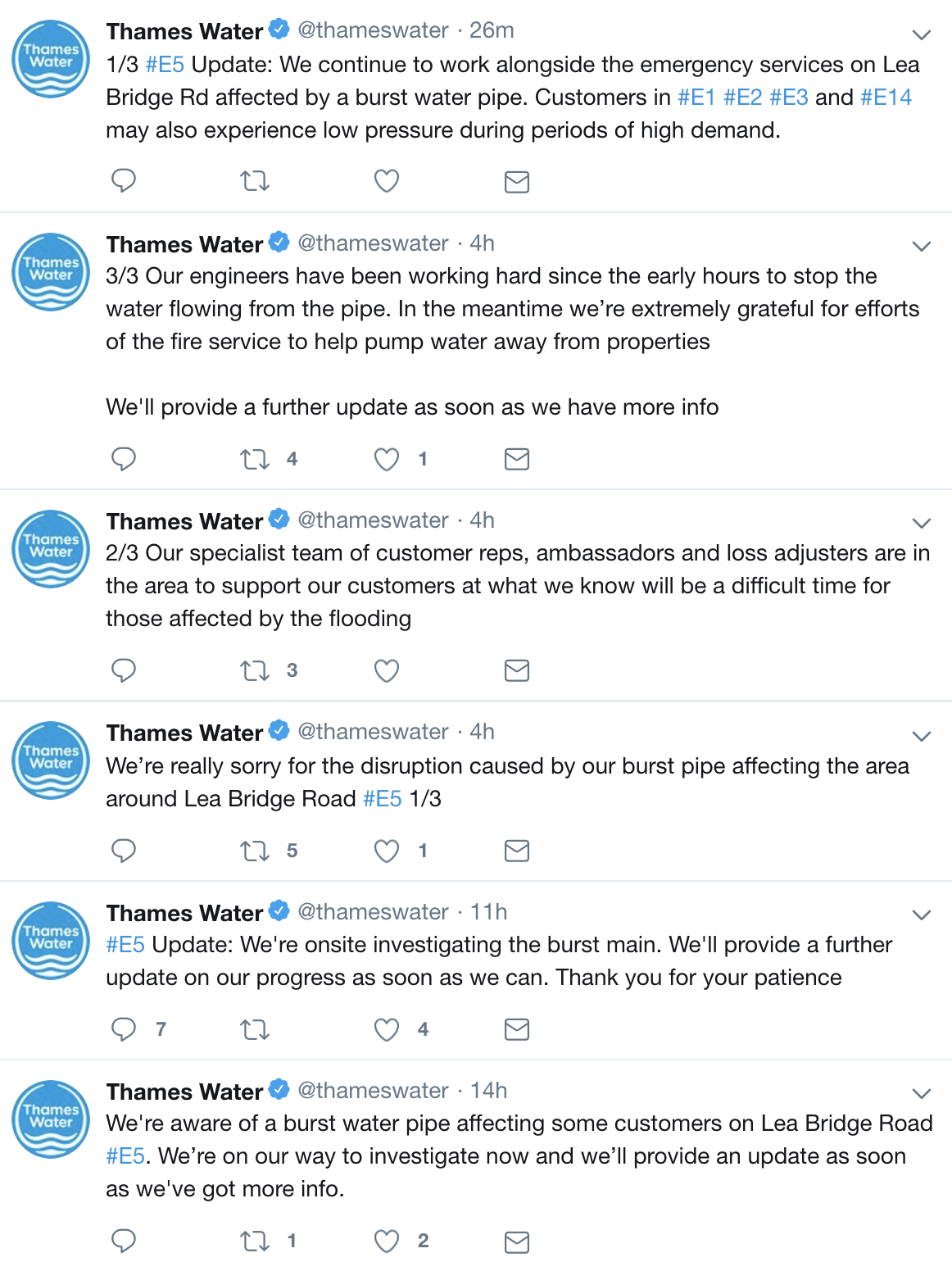