Few things defy the notion of common sense more than groups of individuals who take it upon themselves to hurl abuse and insults at police officers when the very same police officers are trying to take a wanted person into custody.

Whilst the ‘individuals’ who make up these ‘brave’ crowds would never actually stand alone and hurl the same abuse at police officers, they are always quick to overdose on ‘brave pills’ when in a group.

I remember once going to arrest a known paedophile when I was a cop in east London, only to be met with a groups of lads who started shouting abuse at us.

I remember thinking that the person we were arresting, would probably, if he could have done, committed despicable acts against the family members of the people who were shouting the abuse at us and yet, we were the ‘nasty’ ones?

Go figure. Such is the mentality of some people who do not know how to use their brains properly.

This morning (5th September) we heard about an incident in the West Midlands Police area (Druids Heath) where armed officers were sent to try and find someone who was wanted.

However, as they were trying to find the male they were met by a group of individuals who clearly believed that, regardless of the offences which the wanted person may have committed, the best way to thank the police for trying to keep them safe, was to hurl abuse at them.

What they ended up doing, however, was to unintentionally help the police by coaxing the wanted person out of the address where he was hiding: 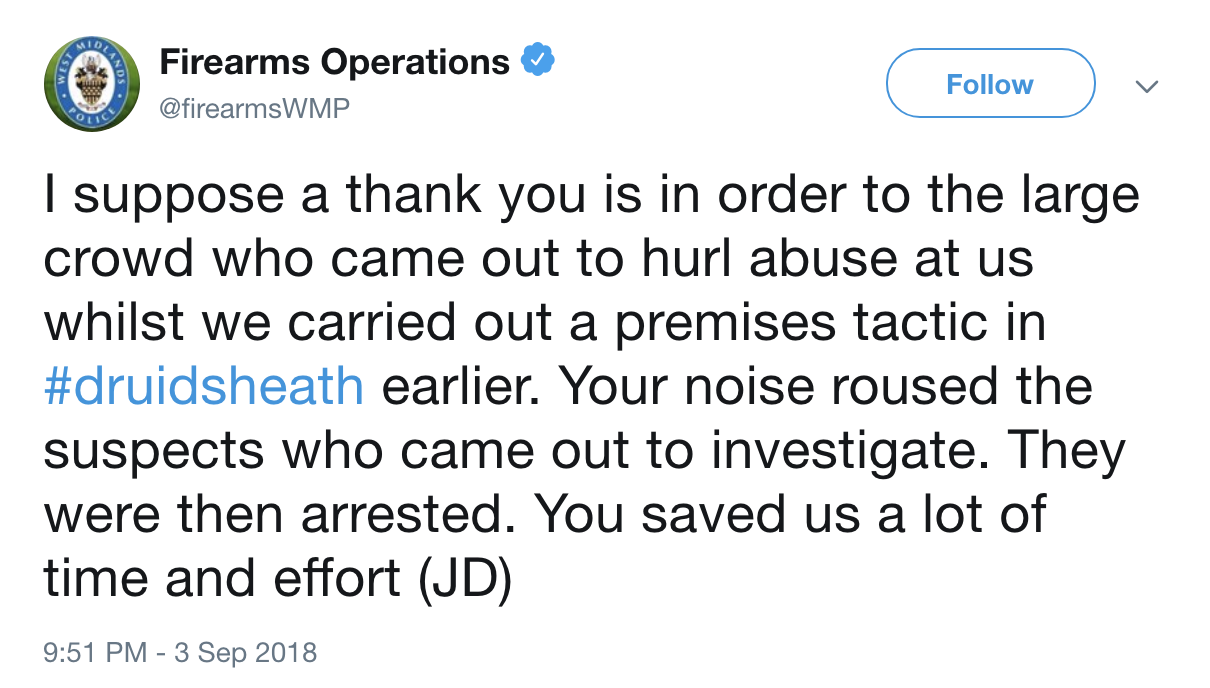 Don’t you just love it when a plan comes together?

Maybe the crowd, who clearly had naff-all else to do with their time, might just keep out of the polices’ way next time they are trying to do their difficult job?

Since the tweet, the vast majority of people, who appreciate the fact that the police put their lives on the line in order to try and uphold the law, have posted messages of support for the cops.

What’s the bet that, at the first sign of trouble, the ‘brave’ anti-police mob would have run off back into the shadows?

It was only just over 12 hours ago, that someone ended up getting shot in Druids Heath – the same area where the anti-police mob were trying to disrupt the work of the armed officers.

I wonder where the ‘brave’ crowd of anti-police delinquents were when the bullets started flying around?

I bet that they weren’t as ‘brave’ then – that’s for sure.