The rare statement comes just a few days after new legislation was introduced which will see anyone who is convicted of assaulting a member of the emergency services have their sentence doubled.

The Assault on Emergency Services (Workers) Act gained Royal Assent only last week, at a time when there appears to be a worrying spike of violent assaults on first responders up-and-down the country.

The Cumbrian figure was revealed at Carlisle Crown Court as prosecutor Gerard Rogerson outlined an attack on police dog handler PC Diane Irving, who suffered a suspected eye fracture and severe facial bruising in an attack that happened last December.

Mr Rogerson outlined how, as police officers were taking Murray to hospital for a check-up, the defendant had clenched his fists and made repeated references to Dale Cregan, who shot dead two women police officers in 2013 during a grenade attack after luring them to a house.

After outlining Murray’s unprovoked and cowardly assault on PC Irving, Mr Rogerson read a statement from Cumbria’s Deputy Chief Constable Mark Webster about the impact of such violence on his officers.

“Police officers and staff are subjected to assaults far too regularly,” said Mr Webster in his statement.

Reacting to the statement that was prepared by the Chief Constable, Judge Davies told the Court:

“There is no way that this crown court receives 423 [police] assaults.

“My view – and it’s a view that I’ve held for some time – is that too many of these assaults on the police are dealt with summarily.

“They are not charged properly. 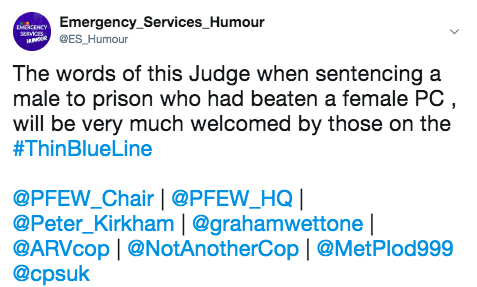 The straight-talking judge said violence towards an arresting police officer should not simply be overlooked – a scenario that seems all-too-common when it comes to police officers being assaulted.

The heartfelt words of this Judge should resonate in court rooms around the country – the very same court rooms which police officers are sworn to protect in their duty to uphold the law of the land.

I know that many of our readers will appreciate the words of Judge Davies at a time when many feel that the justice system lets them down, specifically because they ARE police officers.

We hear time and time again from colleagues who have been assaulted, telling us about how their attackers have not been sent to jail, despite inflicting serious and vicious injuries on them.

Suspended sentences seem to be handed out like sweets when it comes to punishing those individuals who dare to assault the very same men and women who we expect to put their lives on the line in order to keep us all safe from evil.

And yet, these very same officers who have been assaulted are expected to go back out onto the streets and confront on a daily basis the worst that our society has to offer – not all of the time, but most of it.

Jailing him for 10 months, Judge Davies told Murray: “You were drunk; you were aggressive; you were abusive.

“Because you were injured they helped you. But you spoke to them in disparaging terms about them being coppers, referring to Dale Cregan, that loathsome individual.

“How dare you threaten, frighten, and intimidate people in that way when they are trying to help you.”

Judge Davies added: “Police in this county are going to be protected, and protected by me, from thugs like you.”

After Murray was sentenced last week, Judge Davies said he would recommend that PC Diane Irving receives a Chief Constable’s commendation for her courage.

Despite being in agony after being repeatedly punched by Murray, she continued working with colleagues as they pursued and caught Murray.

I am sure that many of the men and women who serve on the #ThinBlueLine will appreciate and applaud the stance that Judge Davies took with Murray.

Judge Davies; WE SALUTE YOU!