We have been tracking the progress of the Assaults On Emergency Workers (Offences) Bill as it made its way through the House of Commons and then the House of Lords and we are pleased to see that, as of yesterday, the bill made it onto the statute books.

The Assaults on Emergency Workers (Offences) Bill will create a new offence of assault against an emergency worker in the exercise of their functions with a penalty that is increased from 6 months to 12 months.

Many of our followers have expressed frustration with the sentences which have been handed down to anyone convicted of assaulting a member of the emergency services, so hopefully this new law will see people convicted of such getting locked-up for longer.

This means that when a person is convicted of a range of offences including sexual assault, ABH, GBH and manslaughter, the judge must consider the fact that the offence was committed against an emergency worker as an aggravating factor meriting an increase in the sentence within the maximum allowed for the particular offence.

Whereas attacking an emergency worker could previously see a charge of common assault and maximum sentence of 6 months in jail, this will be increased to 12 months.

Attacking a person serving the public is already an aggravating factor in sentencing guidelines but this Bill will put that position on a statutory basis for emergency workers.

The Justice Secretary is also bringing through a range of measures to protect prison officers, including rolling out body worn cameras, ‘police-style’ handcuffs and restraints, and trialling PAVA incapacitant spray.

‘A new offence will double the maximum sentence from 6 to 12 months in prison for assaulting an emergency worker. This covers police, prison officers, custody officers, fire service personnel, search and rescue services and paramedics.

‘The new law will also mean that judges must consider tougher sentences for a range of other offences – including GBH and sexual assault – if the victim is an emergency worker.

‘Ministers have acted to recognise the debt of gratitude the public feels towards our emergency services, and for the courage, commitment and dedication they show every day in carrying out their duties.’ 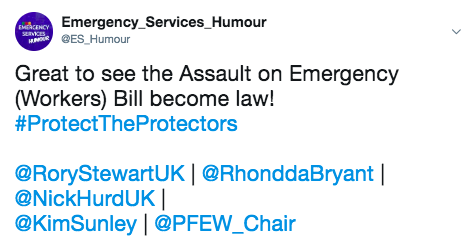 Any of our readers need only look on our website under the ‘assaulted on duty’ search term in order to get an idea as to the frequency and severity of the attacks on our emergency services colleagues.

“Assaulting prison officers or any emergency worker is not just an isolated attack – it represents violence against the public as a whole.

Every day these public servants do extraordinary work on our behalf, and they must be able to do it without the fear of being assaulted.

Our message is clear – we will protect our emergency services and violence towards them will not be tolerated.

I’d like to thank Chris Bryant MP, and other colleagues from across the House for their tireless work introducing this important law.”

There is already a specific offence for assaulting a police officer, but for the first time similar protection will be extended to anyone carrying out the work of an emergency service. The law also provides extra protection to unpaid volunteers who support the delivery of emergency services.

The government worked closely with Chris Bryant MP, who introduced the Bill, to draft the legislation and ensure its successful passage through Parliament. Following its Royal Assent today, the measures will come into force in November.

Minister for Policing and the Fire Service Nick Hurd said:

“Being attacked should never be part of the job for our courageous emergency services workers, who put themselves in harm’s way to protect us.

This law will ensure judges can properly punish those despicable individuals who think it’s acceptable to assault these hard-working men and women.

Unfortunately I hear about cowardly attacks on police officers and firefighters all too often – they serve as a constant reminder of the threats that these public servants have to face, and this government will always stand with our emergency services.”

“The growing tide of attacks on emergency workers – including ambulance workers, NHS staff, fire officers, prison officers and police – is a national scandal. All too often attackers get away with little more than a slap on the wrist.

I hope this new law will help put a stop to that attitude. An attack on an emergency worker is an attack on all of us and attackers should face the full force of the law. Now it is for the prosecuting authorities and the courts to play their part in putting a stop to the violence, so that emergency workers can get on doing their job in peace”.

“Physical assaults remain a fact of life for many healthcare workers, from A&E to community services. This bill is the first step towards changing that for good. From now on, anyone who wilfully assaults a healthcare worker will feel the full force of the law and can expect a tougher sentence if found guilty.

The RCN has campaigned tirelessly for this law. Our negotiations have ensured it covers as many healthcare workers as possible, including community and district nurses, and alongside other emergency workers’ representatives we successfully expanded the scope of the bill to include sexual assault.”