by John Johnson
in Emergency Services News, Police Service, You Couldn't Make it Up
2 min read
0

An Illegal street racer took his inherent stupidity one stop higher recently after being caught by West Midlands Police in a vehicle that had been made to look like a marked police car.

One male was arrested by police in Stechford after using blue flashing lights which had been affixed to his windscreen.

No doubt the individual who decided to turn his car into a fake police vehicle may have been using the lights and livery as he potentially broke every road traffic law under the sun.

Illegal street racers believe that they have the right to put other road users lives at risk by darting around the streets like maniacs.

But this is the first time we have ever heard of someone being stupid enough to try and impersonate the police by turning their car into a fake police vehicle.

In the video shared on twitter by @ResponseWMP you can see the blue leg light that has been placed on the inside of the windscreen whilst on the bonnet is a small ‘West Midlands Police’ sticker.

Under the sticker, the word ‘Police’ has been haphazardly affixed to the front of the bonnet in a way that any experienced police officer would notice as being a tad suspect.

It also appears that the moron who owns the vehicle has also managed to get hold of a blue light bar that has been fixed to the roof of the vehicle next to a number ‘5’ (obviously watched too many episodes of ‘The Bill’.

After their tweet,  one buffoon criticised the Cops for not catching ‘real’ criminals, but we are fairly certain that the same moron who slated the police would be the first to phone them had he of been involved in an accident with the illegal street racers. 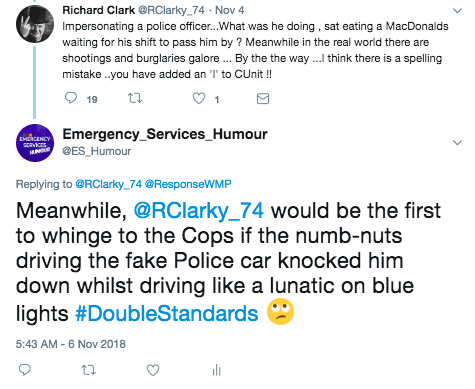 Nice work by @ResponseWMP | @WMPolice – even fleet services would probably laugh at the shoddy graphics on the fake police car – did the roof lights work as well? https://t.co/vJz1iOsmLZ