This blog was sent into us anonymously via email and contains the details of a 999 call which some people might find distressing.

We have changed some of the details contained within the article from the original in order to protect the identities of those involved.

We are sharing this because we think that this blog raises some very important points and questions in relation to how our emergency services deal with people who are having a mental health crises.

Let us know what you think in the comments below:

‘Just wondering if you would think of posting this.

‘It’s a bit ranty but after getting home at 4am from a rubbish shift and waking up feeling wrecked! I just felt I needed to vent on the lack of training, input and support we get when it comes to dealing with people with mental health and to see if others feel the same.

‘I’ve done the job for over 5 years and spoke to so many people wanting to self harm, on a bridge taking pills etc but something last night made me really think that we have no training at all to help us deal with these situations!

‘So I left the control room in the early hours of the morning, my full shift has been non stop domestics, fights and a shit load of jobs where people have mental health problems.

‘I’m a police call handler I don’t have any mental health training or input whatsoever.

‘I’m “trained” to deal with Burglaries, shoplifting, RTC’s, assaults and we’ve been given a basic in how to take details when someone has been sexually assaulted, oh and mispers (I think we get more input on mispers than anything else!).

‘Tonight like every other night has been relentless and emotionally draining but you deal with one job and wait for that beep in your ear for the next “police emergency”. Tonight I had a job a job that made me question my ability to do this role (and I’m not a fresh out of the box newbie)

‘A female so distraught that she was going to kill herself.

‘It was a dropped 999 call so I called her back to hear her say that she had a kitchen knife to her throat.

‘Now was she just saying that to get a response like so many do?

‘I didn’t know I can only hear her.

‘There was already a job in with no mention of knives she was inconsolable and kept saying if police came she would end it and she’s already cut her wrists. So I try and talk to her and I honestly struggled, trying to make conversation, ask her things and she was replying “I can feel it cutting” what do you say to that when you have to try and keep them on the phone.

‘My point in all of this is where the hell is our training for people going through things like this.

‘I don’t know what I should be saying, what if my one question is the one that tips her over the edge, she cuts her throat, the guy on the bridge jumps off, the young female hangs herself…. 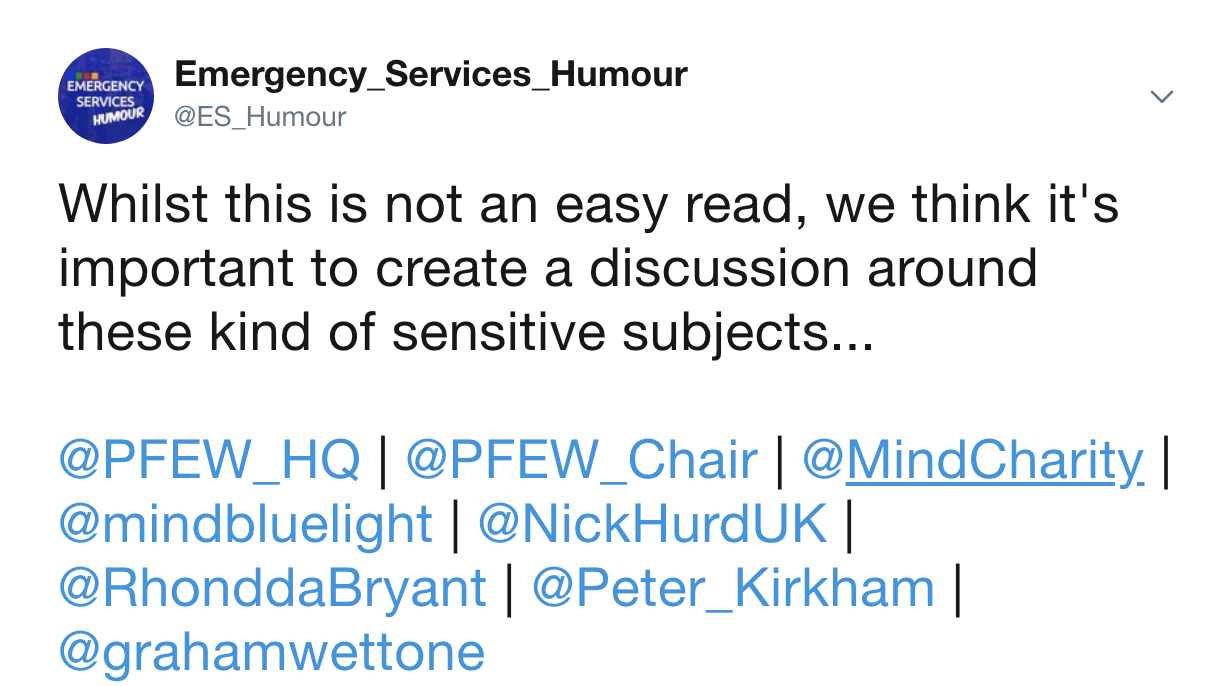 ‘Yes they call in negotiators but they aren’t there for the initial call, the cops are traveling; but it just us and them on the phone.

‘I was left with moments of silence in between her sobbing and wailing.

‘Ask about family, she’s been in care, fuck. Ask about children, wrong question fuck, have I tipped her over the edge.

‘The call drops out. She might be known to the officers going but to me she’s a woman on the brink and I don’t know what she is capable of.

‘Have I said the wrong things and now she’s wound up, now I’m worrying that my call and my words could put the attending officers at risk.

‘Now I’m worried about them, is it going to be a single crewed officer who turns up! We are getting more and more calls coming in from people in crisis with mental health issues.

‘Why aren’t we being trained to deal with these things!

‘Supervision don’t care they are looking at the figures for the calls waiting, they don’t take the calls or go to the jobs, they don’t hear the screams or see the blood and bruises.

‘I don’t want us to end up being like the Samaritans but at least give us something so we feel like we are helping, give us some support give us the tools to work with.

‘My other half told me this morning that I looked “knackered” I slept ok but emotionally I’m drained.

‘Oh and yes she did have knives and did supervision ask i was ok even after a colleague said I had a shit job, no!

‘The wheel is slowly but surely coming off and I don’t think I want to stay for the crash.

‘Will i be hung out to dry if it all goes wrong and goes to coroners Court or will I be supported by the organisation I work for.

‘Sadly I don’t think it will be the latter.

Thanks for taking the time to read this. Xx’