Many people probably would have heard about various ‘objects’ being left on emergency ambulances by persons unknown whilst the ambulance crews deal with their patients.

Some of these objects have been nasty notes which have attempted to try and give unwanted, unwelcome and unnecessary ‘advice’ on how to park an ambulance, in an emergency, before treating a patient.

A few people have ended up getting arrested after leaving these belligerent messages of hate, such was the venom with which some of these notes were written.

And then we heard about money being left on ambulances with accompanying notes asking the crew to treat themselves to a coffee and cake – emergency services personnel love cake!

The issue with the money being deposited was that some people, other than the people who the money would have been intended for (medics), would no doubt end up taking the money from the ambulance and would probably end up spending it on White Lightening Cider instead.

If you DO want to give money to medics, then you would probably be better off donating it to an ambulance charity instead.

Still, at least the ‘nasty note’ epidemic appears to be over. For now.  It would also seem that money being left on ambulances is now also a thing-of-the-past.

Instead, it would seem that the new trend might involve people leaving tea and biscuits on the door handles of ambulances, judging by a recent tweet that was published by a paramedic on the thin green line. 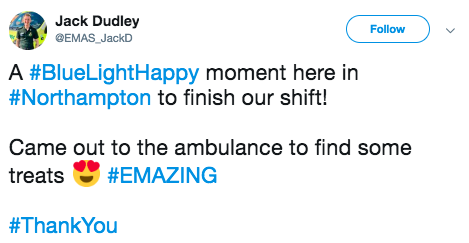 Along with the tweet, were pictures of the ‘gifts’ which seemed to include some teabags, sesame seed ‘cakes’!? and some legendary Gold Bars.

Although, many tea lovers will probably question as to whether or not ‘Typhoo’ counts as ‘proper’ tea. 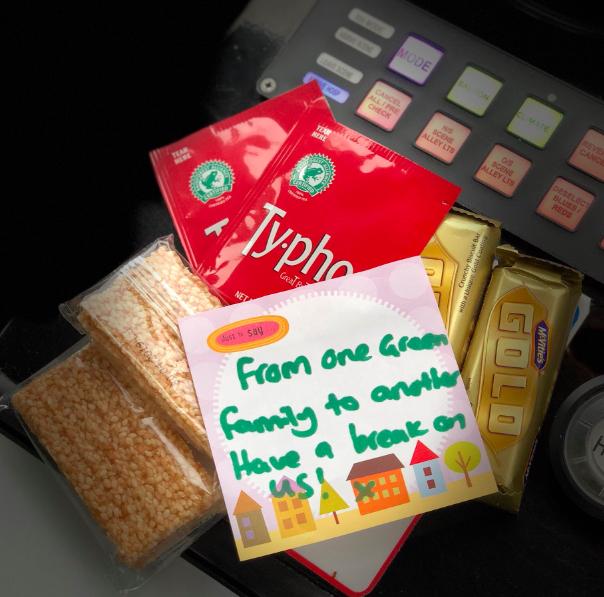 The ‘sweet’ gifts had been left in a bag that was tied to the door handle of the ambulance: 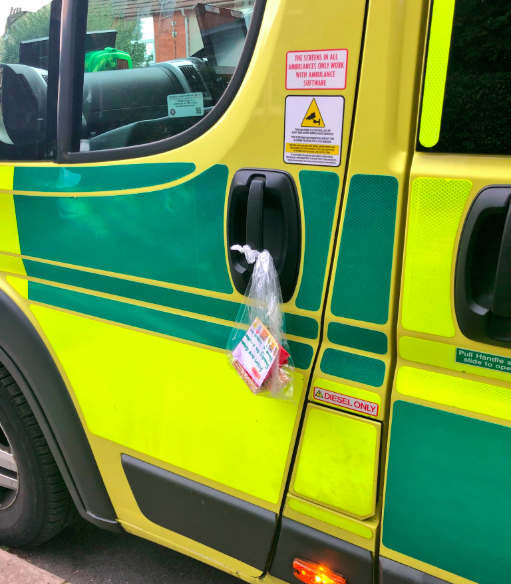 Still, like my old oppos in the armed forces used to say: ‘you pick your branch, you take your chance’.

Whoever left this particular bag of goodies on the emergency ambulance clearly has good taste.

Gold bars are obviously at the top of the food chain when it comes to biscuits – so fair play to whoever left them on the ambulance!

The question now remains: What will be left next?

Surely it can’t be long until a whole pack of Jaffa Cakes gets left on an ambulance? Or maybe even Goji Berries? (as a healthy option perhaps?).

The best ‘gift’ that I ever had, was a slap-up Turkish meal that was donated to my colleague and I from a local Turkish restaurant after we helped them out with the removal of an unhappy patron who was throwing food all over the place.

We are yet to hear about any reports from our police, fire or coastguard / lifeboat colleagues in relation to ‘gifts’ being left for them on their vehicles (or boats).

Not that we are of course saying that people should leave gifts.

Instead, we are celebrating the decent folk out there who understand and recognise the hard work and dedication to duty that is made by our emergency services on a daily basis.

So if you have ever left a kind note, some sugary snacks or some money on an emergency vehicle, then on behalf of the men and women of the emergency services, thank you!

I must admit, that I am now tempted to keep a pack of biscuits on me just in case a see a parked and unattended emergency vehicle as I go about my daily business.

Written by one of the many admins of Emergency Services Humour who is also a regular blogger in our fortnightly eMagazine ’S__ts & Giggles’ which you can sign up to by visiting our Facebook page and clicking on the ‘sign up’ button or by visiting ShitsAndGiggles.Online

If you have an anonymous blog that you would like us to share with our readers, then feel free to contact us using the details below.