FOUR Police Officers ASSAULTED From The Same Response Team During ONE Shift In London!

In the time that we have been making a point of covering stories which involve members of the emergency services being assaulted, I do not recall ever hearing about four police officers from the same response team being assaulted during one shift!

However, that is exactly what happened yesterday during a shift in Barking & Dagenham (Metropolitan Police)

“That’s 4 officers injured, doing their job, in one short 8 hour shift, in one London borough.

From memory, around 8-15 officers parade at the start of a shift in barking & dagenham, so you are looking at nearly half of one response teams officers being assaulted during just one shift!

It goes without saying that we send our best wishes to the officers and hope that the officer who sustained the serious injuries makes a quick recovery.

Unfortunately, at this stage, we do not know much about what happened or the circumstances being the assaults.

But what we do know, is that the both the public and the emergency services will demand and expect that those responsible are put before the courts rather than getting a ‘caution’.

And we sincerely hope that the Magistrates/Judges make full use of the new Assaults on Emergency Services (Workers) Act and that, if convicted, the individuals responsible get sent down for the new minimum term of 12 months upon conviction that accompanies this new law. 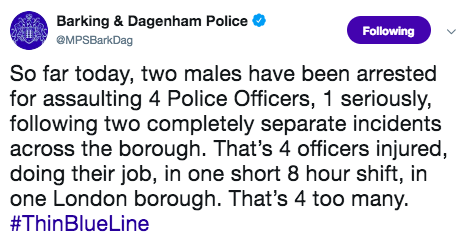 People living in Barking & Dagenham, as I did for nearly 9 years, should now be worried about the fact that their Borough is down several officers owing to the vile behaviour of two individuals who clearly need to be locked up.

As if the police did not have enough to do already, with increased work loads and fewer officers, then having to now cope with potentially being down by four response team officers will only put more pressure on an already overstretched police force.

Many people took to twitter to send their messages of support for the police officers.

Despite the efforts of some media outlets to undermine the police and to paint the police in a bad light, the vast majority of the public (apart from criminals and those who sympathise with criminals) really do support our emergency services. 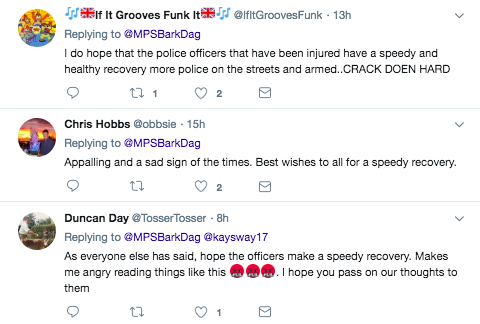