Unfortunately, all-too-often, some individuals (not necessarily the individual who brought this case against the police), motivated by the prospect of a large payout of compensation, seek to try and discredit the name and reputation of some of the worlds finest police forces such as the Metropolitan Police.

Personally, I think that it’s abhorrent that some people are able to claim considerable damages against the police for incidents which may, or may not, have been initiated by their own actions.

I am not talking specifically about this case, as I do not know anything other than what has been reported – which isn’t that much!

But we will always happily share the stories about police officers being cleared of whatever it is that they have been accused of – so the public really know what is going on.

The four police constables listed below answered allegations that their conduct amounted to a breach of Standards of Professional Behaviour in respect of “use of force”, “authority, respect and courtesy”, and “discreditable conduct” during a misconduct hearing which concluded on Thursday, 5 October. 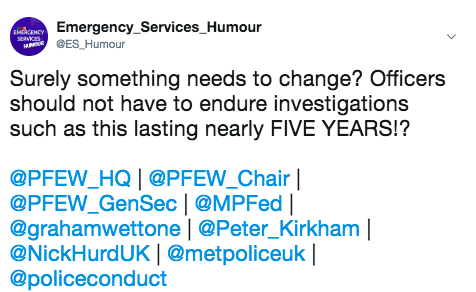 It was alleged that in March 2014 at Northolt Underground Station, the officers assaulted a member of the public whilst on duty, and arrested him without lawful cause.

The alleged assault consisted of hitting the man with a baton, spraying him with CS spray, pushing him, holding him on the ground and handcuffing him.

The panel, led by an independent legally qualified chair, considered all of the evidence presented by the appropriate authority on behalf of the IOPC and the defence provided by the four officers.

At the conclusion of the evidence the panel concluded that all misconduct matters against the officers were not proven.

These four police officers would have technically had to of put their careers on hold whilst this investigation, that last NEARLY FIVE YEARS was undertaken.

Imagine being effectively ‘ring-fenced’ in your job for nearly five years, whilst an investigation of this magnitude was carried out against you?

How would you feel? How much stress would you be under for nearly half a decade!? It’s not wonder so many police officers take time off of work owing to stress – they are treated like criminals whilst trying to uphold the law.

In many investigations against the police, the officers concerned are treated as if they are guilty until proven innocent which is clearly not fair.

But you won’t hear about this sad state of affairs in any recruitment literature, thats for sure!

Wouldn’t it be great if the officers could now sue the individual who brought this complaint against them?

It might then deter other individuals from bringing unfounded allegations against members of the police force who then have to endure five years of stress and uncertainty.