Firefighters Find Offensive Letter After Extinguishing A ‘Bombfire’ On A Beach

by John Johnson
in Blogs, Emergency Services News, Firefighting, You Couldn't Make it Up
3 min read
1

We have seen ambulance crews become the victim of offensive notes and we have seen police vehicles also adorned with notes which appear to have been written by individuals who clearly just hate the world.

But, until now, Firefighters have been relatively immune from the cold front of peoples vile attitudes when it comes to our emergency services.

However, crews recently found a handwritten letter that, without a doubt, is one of the most offensive and obnoxious notes which we have seen.

So bad was the handwriting, that we even had to call in experts to try and decipher the text which even top boffins at GCHQ might find hard to turn into anything remotely legible.

The identity of the author is not know, but everyone will be able to make their own conclusions regarding the type of individual who left the note.

“to the miserable c**nty firman who put the bomb fire out on beach tonight at 6pm.

“on a f**king saturday night the night of the planned bomb fire on beach nite. sad man.

“no s**t I turned up at 5.55pm expecting a big bomb fire with lots of local lots of fun and laughter happening.

“But to my surprise what do I see!!

“A miserable firman who thinks he has the power over the community wanted to destroy the hope of a bit of fun within the bay community coming together as one.

“very disappointing an disheartening for people of bay”.

To be honest, the ‘fireman’ probably did the community ‘event’ a massive favour as no doubt had the individual who wrote this letter of turned up, then he/she probably would have ruined the event anyway with their bad attitude.

If he/she thought that they were attending a ‘bomb fire’ as opposed to a bonfire, then perhaps the security services might want to track them down in order to, well, just check them out…

Unfortunately, we have no idea as to how big this ‘bomb fire’ was but we do know that the author of this letter was fairly agitated by the fact that this ‘evening of fun’ had been ruined.

Perhaps it was the notes authors ONLY chance of getting out and having some fun as it seems that the chances of them having a large social circle is fairly slim, given their blatant display of rudeness.

By the sounds of the letter, it would appear that one lone ‘fireman’ turned up to put the fire out, but maybe it was just a local who dresses up as a fireman rather than an actual firefighter? Who knows.

What we do know, however, is that now even fighters are not immune from the continuing trend of abusive notes being left in random places for our oppos to find. 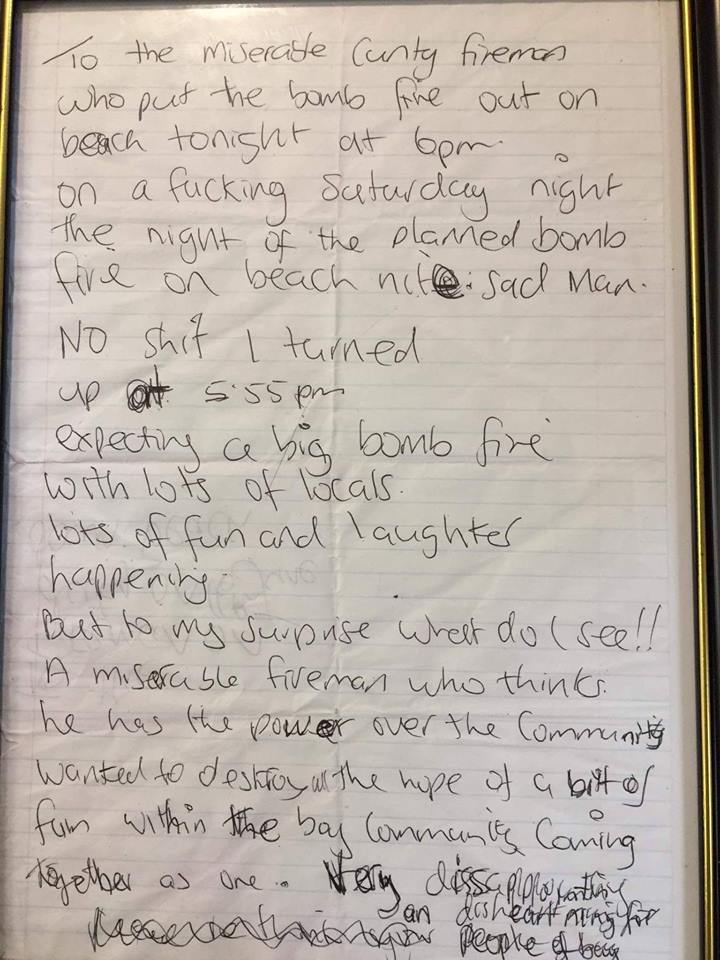 As you can see from the above image, the firefighters to whom this letter was addressed were so impressed by it, that it has been put into a frame.

I am fairly sure that zero expletives were given by the firefighters when they found this note, which is how all similar notes should be treated by our colleagues should any more of them just happen to turn up.

Suffice to say, that the author of this note will be ‘awarded’ and ‘recognised’ for their random act of nastiness in the next issue of our fortnightly eMagazine.

Written by one of the many admins of Emergency Services Humour who is also a regular blogger in our fortnightly eMagazine ‘S__ts & Giggles’ which you can sign up to by visiting our Facebook page and clicking on the ‘sign up’ button or by visiting: ShitsAndGiggles.Online