You would hope, and expect, that the men and women who work in the emergency services would be afforded the sort of basic amenities that most of us end up taking for granted.

For example, having toilets which actually work in a brand new building that has cost millions of pounds to build ‘should’ be fairly straightforward.

Or at least, you would have expected it to be.

However, earlier on today we were contacted anonymously by email from someone who works for South East Coast Ambulance Service (SECAmb) and who informed us that Emergency Operations Centre (EOC) Staff are being forced to use portaloos in their brand new building.

Apparently, Surrey County Council had spent a vast amount of money on the building, but the building, Nexus House, has been plagued by on-going plumbing & heating issues meaning that staff have to undertake an extended walk just to spend-a-penny!

Ordinarily, this might not be a massive deal in your average workplace. After all, these things can happen…

But we are talking about the emergency services here, where time can make the difference between life and death.

Having to keep away from the job for an extended period of time, just to talk to a portaloo is not ideal.

‘Us SECAMB staff are having to use portaloos in the car park, as our new million pound building has plumbing issues!

‘The building has been newly built by Surrey County Council for SECAMB – and the toilets don’t even work and haven’t been working for some time!’

‘Apparently they were fixed yesterday but this is a new building – we only moved into it last year and this happens regularly.

‘Surprisingly it was the Trust who went behind the building owners back to get the issue resolved!

‘The building is an absolute joke!’

An update sent to staff by SECAMB personnel said:

‘Hi all. Quick update on the toilet saga.

‘We have had little success with the building management company so against their wishes, we arranged dynorod who came out last night and cleared the blockage from our drains.

‘It moved into the sewer which dynorod thought was Thames Water’s and as such the report moved to them to deal with.

‘Thames Water was told at 3am and offered a 24 hour response time.

‘At 9am, it was chased only to discover they had lost the job.

‘The contractor came out in the last 2 hours and has evidenced that due to the way the sewer is positioned, it is actually our part of the sewer that is blocked.

‘The building management company have arranged for someone to come out by 7.30pm but we lack confidence that their people will resolve the issue so we have also arranged Dynorod to attend and they have provided the same timeframe.

‘I have arranged with the portable toilet company for them to collect the luxury toilets from a wedding venue today in case they are still needed tomorrow.

They cannot get them to us tonight but they will deliver them tomorrow morning if required’. 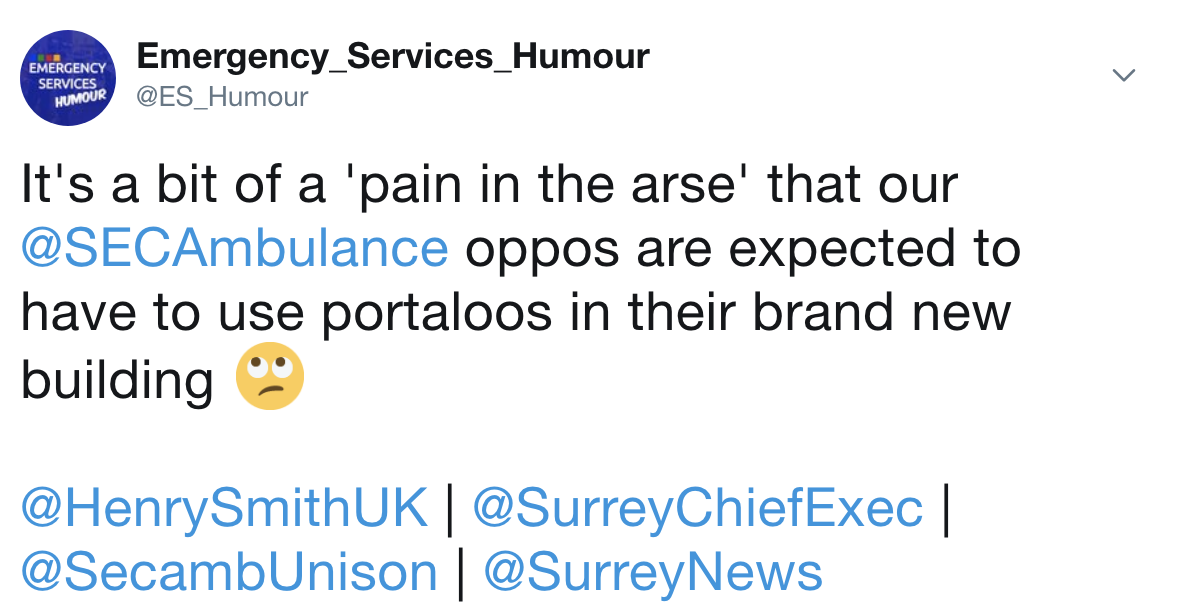 ‘As Chief Executive for South East Coast Ambulance NHS Foundation Trust, I would like to take the opportunity to welcome you to our new corporate Trust Headquarters and West Emergency Operations Centre.

‘I am really excited that we are able to bring together different teams of staff from across the Trust to modern, fit for purpose and well-equipped new facilities.

‘Whether you are based here full time, part time or just making the occasional visit, I hope you will find it a welcoming place to come and work in’.

We contacted Surrey County Council for comment and a spokesman said:

“We were made aware of a plumbing issue on Saturday evening however the toilets remained operational and it was quickly fixed by our contractor.”