EXCLUSIVE: Police Officer ‘Awarded’ £1000 Compensation After Being Assaulted. But Is Left With £0 After ‘Court Compensation’ Is Deducted!

You might have to sit down for this one, because as far as common sense failures go, then this story will probably knock you off of your feet.

Let’s imagine that, if you are not one already, then you are a police officer on the thin blue line.

You get sent to deal with an incident and during that call you end up getting into a situation with a suspect whereby the suspect violently and viciously assaults you.

During the assault, you sustain the following injuries: a broken tooth, a busted nose and 2 x black eyes.

Anyone who has been assaulted in the line of duty, regardless of which part of the emergency services, NHS, HMP they are in, will tell you how utterly violated you end up feeling when the injuries you have sustained were inflicted upon you owing to the uniform that you put on at the beginning of each shift.

We do not know the exact details of what happened in relation to this incident and if such information does comes to light, then we will add it to this article.

What we do know, is that the individual responsible for this officers serious injuries was sent to court and was convicted of assaulting the police officer.

Having been assaulted myself whilst I was in the police (stab wound to leg) I was ‘awarded’ just under £600 in compensation.

My compensation was paid out, just before I went on holiday, and it kind of helped to ‘process’ the fact that someone decided to attack my colleagues and I with a knife.

I mention this, because when you get awarded compensation by the court, to then NOT receive the compensation is like a double whammy – it’s another insult, albeit a non-violent one.

Owing to the fact that the police officer did not receive a penny of the £1000 he was awarded, he made an application to the Criminal Injuries Compensation Authority.

For those of you who do not know, the Criminal Injuries Compensation Authority (CICA) is an executive agency of the UK Government.

The Authority, established in 1996 and based in Glasgow, administers a compensation scheme for injuries caused to victims of violent crime in England, Scotland and Wales.

You might think that this would then off-set the fact that the officer has not received £1 from the previous ‘award’ of compensation that was given to him by the court.

But you would be wrong in making this assumption.

The CICA then DEDUCTED EXACTLY £1000 as ‘Court Compensation’!!! Why is the Court being compensated £1000!? Did the court get a broken tooth, a busted nose and 2 x black eyes!?

In a letter that we have seen dated 12th September, a representative from the CICA said:

“I have looked carefully at the available information and I have decided that you are entitled to an award of £1000.00. After deducting Court Compensation which totals £1000.00, a balance of £0.00 is now payable”. 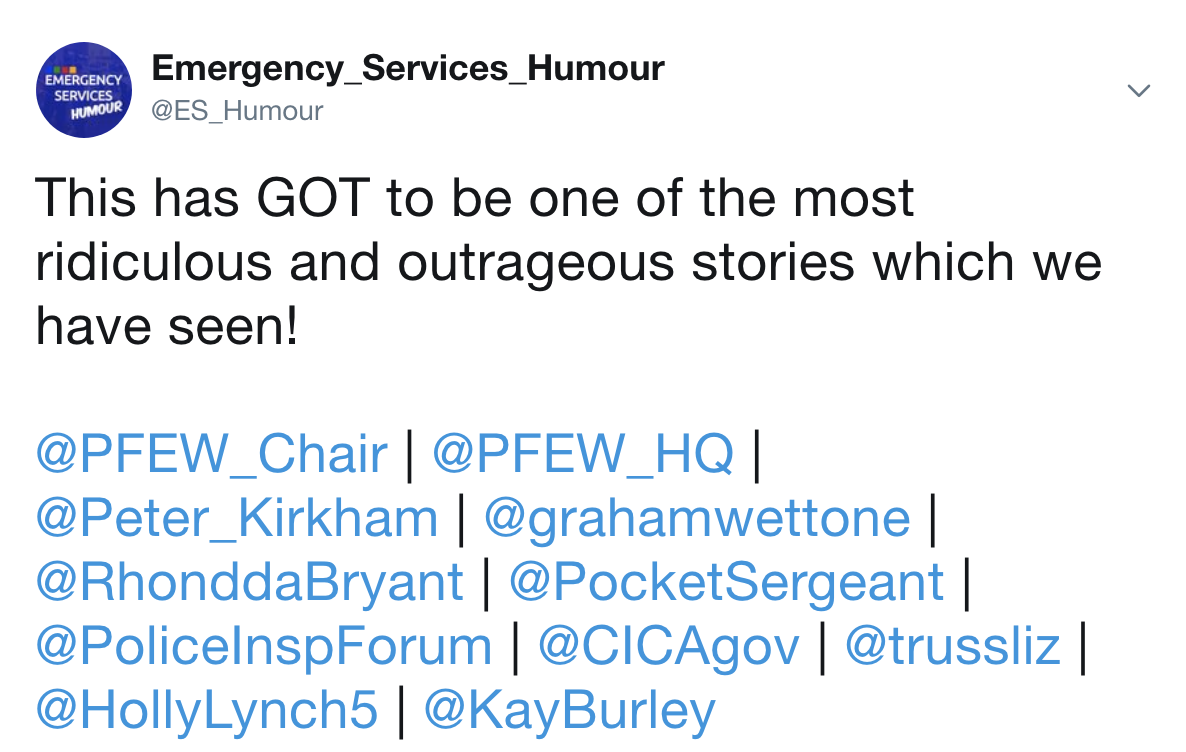 What an absolute shocker. What a kick in the teeth. What an insult.

You really could not make this up!

How on earth can anyone with a decent sense of empathy ever think that it is ‘right and proper’ to AWARD a police officer compensation for the injuries which he received, only to then re-allocate that compensation to a court!?

Some people out there might say that, as a police officer, you shouldn’t be awarded compensation when you are assaulted anyway.

To such people I say: ‘join the police, get sent to call after call after call, get assaulted time and time again and then come back to me and tell me why you think that you should not be compensated’.

Just imagine how you would feel if you were this police officer – how let down and how utterly disappointed you would be in a system that is supposed to help you.

I am shocked. I have no more words…

This decision MUST be re-looked at and/or reviewed and this police officer MUST receive the compensation that he is entitled.