Only a few days ago, we shared a story about a Metropolitan Police vehicle that had been hit by a drink driver with such force, that the police car was written off and the two police officers in the vehicle were taken to hospital.

And now it would seems that colleagues from the East Midlands Ambulance Service have also fallen victim to the scourge and menace of the drink driver.

We were contacted earlier on this morning via our Facebook page (Emergency Services Humour) about a post that had been shared on social media by someone who knows the ambulance crew who were in the vehicle when it was struck by a drink driver.

One of the medics inside the emergency ambulance had to be stretchered out of the vehicle.

We have taken the name out of the post as the story is yet to officially be made public.

“So i thought id share this photo as this is the ambulance that ******** was driving last weekend.

“Unfortunately ******* was removed via a stretcher due to a DRINK DRIVER. 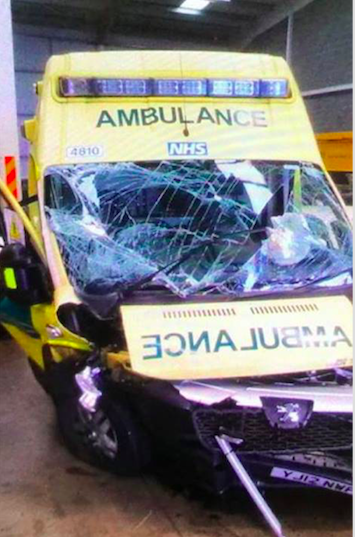 There does not appear to be any information released yet by East Midlands Ambulance service in relation to the specifics of the incident and the current condition of the ambulance crew.

Drink drivers should be banned from driving for life!

They do not deserve to share the roads with anyone, let alone the brave men and women who serve in the emergency services.

We sincerely hope, that when the driver who hit the ambulance gets put through the court system, that he/she is NEVER allowed to get behind the wheel of a car again.

And if you are ever tempted to drive having had too much to drink, then just think about the lives you could potentially ruin owing to your bad decision.

We send our best wishes to the crew and wish them a speed recovery.

Paramedic Injured After Emergency Ambulance Overturns With Blue-Light Patient Aboard

Disgust As Emergency Ambulance Is Broken Into By Callous Thief

Male Sentenced After Pointing Gun At Paramedic In Ambulance