Drug Dealer AVOIDS JAIL Despite HEAD BUTTING A Police Officer Whilst On A SUSPENDED SENTENCE!

by John Johnson
in Emergency Services News, Police Service, You Couldn't Make it Up
4 min read
0

Sometimes you hear about or read a story that seems to defy any notion of common sense and/or logic. This is one of those stories…..brace yourself!

Ricky Rogers was on a suspended sentence for selling cocaine and ecstasy in London when he decided to have a night out in Swindon.

The SwindonAdvertiser.co.uk reported that Rogers was kicked out of a nightclub in the early hours of the morning.

Shortly after, Rogers launched a violent and unprovoked attack on a police officer who had been called to the scene by members of the public who were concerned about the aggressive behaviour of Rogers.

The Officer who was assaulted by Rogers called for urgent assistance and more officers arrived at the scene in order to help their colleague who was trying to restrain Rogers.

Rogers, owing to his continued aggressive nature, was placed in leg restraints and was put into the back of a police van.

During this time, Rogers headbutted another police officer which caused the officer to hit his head against the metal cage in the back of the police van.

Remember, that this all took place whilst Rogers was on a suspended sentence for drug dealing….

For our readers who may not know, a suspended sentence is basically a prison sentence that does not exist.

When you get a suspended prison sentence, then the court expects you to conduct yourself in a normal and dignified manner until such time as your ‘suspended sentence’ has ‘finished’. 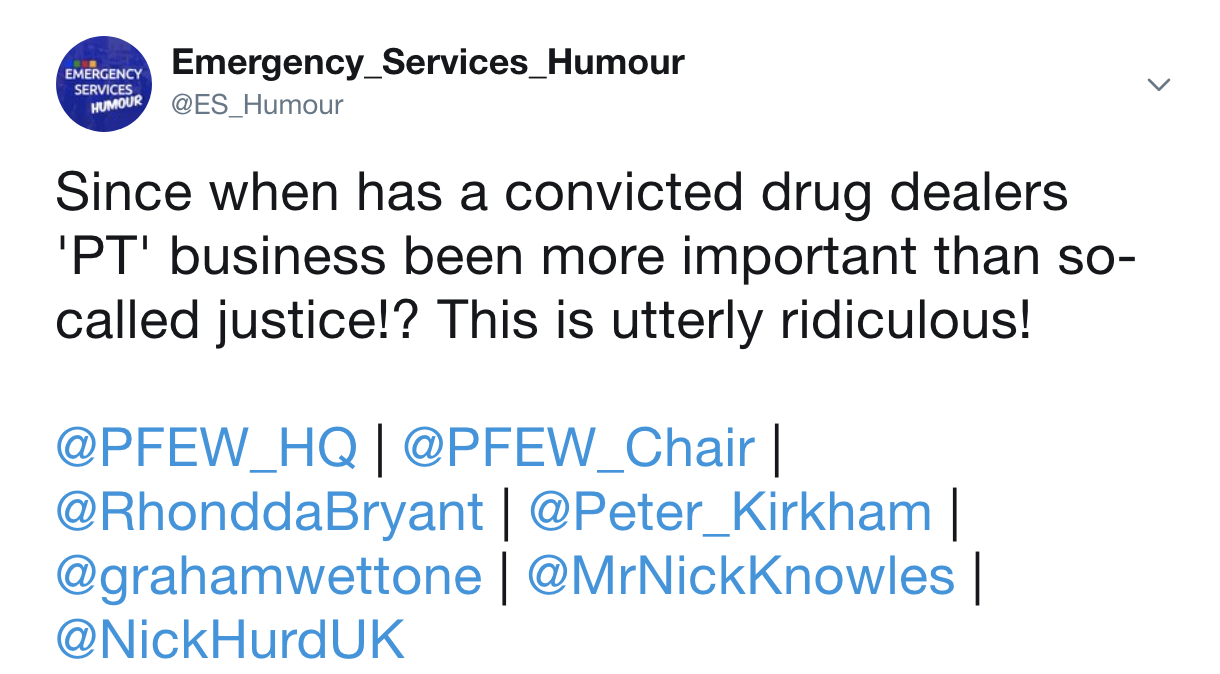 Rogers once again found himself in court after assaulting the police officers who were trying to bring him back into custody, because of the disgusting and violent manner in which Rogers had conducted himself.

Remember, his conduct was down to his own actions. Not anyone else’s.

However, and this is where there seems to have been a total failure of common sense, after hearing that Rogers, who is a ‘personal trainer’ may lose his clients if he was jailed, a judge decided that it would be ‘unjust’ to activate the suspended prison sentence!

So, even though Rogers decided to assault the police, knowing full well that he would probably get sent to prison and would probably ‘lose his clients’ the judge in this case decided that it was unacceptable that Rogers might end up POTENTIALLY losing clients!

Clients which, had he of been sent to prison, he could have quite easily replaced as, guess what, LOADS of people are into their fitness and if you are a good personal fitness trainer, then you will quite easily build up another portfolio of customers!

It sounds like the judge in this case has been well-and-truly hoodwinked by the excuse that has been offered by Rogers!

As they detained him he started to resist, tensing his legs and struggling, and had to have leg restraints fitted.

She said he kept shouting he couldn’t breath and was rolled over, but officers still had great difficulty keeping hold of him.

“He did appear to calm down and he was walked to the van. Once in the van he jumped up on to his legs. He was screaming,” she said.

“He was resisting getting in to the van. PC Ben Moore was attempting to get him in. He leaned forward and he head butted PC Moore to the side of the head.

“It was with considerable force for Mr Moore’s head to snap back and hit the metal cage on the side of the van.”

Although the impact caused great pain to both sides of his head she said there was no long-term injury.

She said officers had to use parva spray on the defendant to calm him before he was ferried to the police station.

In a victim personal statement the officer said that he had been assaulted before but did not think it was ‘part of the job’.

Rogers, of Mill Hill East, London, pleaded guilty to assaulting a police officer and being drunk and disorderly.

The court heard that in December Rogers got 21 months suspended for two years at Harrow Crown Court for possessing cocaine ecstasy with intent on supply.

Probation officer Claire Hyde, giving an oral report, said he was in Swindon as his partner’s nephew was opening a barber shop that weekend.

John Upton, defending, said his client had completed the 150 hours of unpaid work he was sentenced to and tried to disassociate with people involved in drugs.

Passing sentence Judge Robert Pawson ordered he do 250 hours of unpaid work and pay £500 compensation to the officer adding he would not impose a curfew in case it affected his work.

So there you have it.

It would seem that if you assault a police officer whilst being on a suspended prison sentence for selling drugs (which ruins the lives of tens of thousands of people), then SOME judges will believe that your ‘business’ is more important than being punished for your abhorrent actions.

God only knows how let down the police officers who were assaulted by Rogers must feel, having been violated by Rogers only to find out that it would appear that Rogers ‘personal training’ business is more important than the polices right to expect that they will be protected.

We hear about a lot of stories involving the sentences which are handed out to individuals who have assaulted a member of the emergency services. But this is one of the worst cases of leniency that we have heard of.

Guess what? IF Rogers was so worried about losing clients should he be sent to prison, THEN HE SHOULD NOT HAVE HEADBUTTED THE POLICE OFFICER!!!!

It really is that simple!