by John Johnson
in Guest Blog, The Back Canteen
4 min read
0

A neighbour let us in to the patient’s flat and led us to where she was lying on the kitchen floor.  The poor old girl had simply fallen and not been able to get up, and had subsequently been lying for over six hours.

Now, I don’t have much of a sense of smell.

I put this down to constant exposure to horrible smells over time.  And thus, when we stepped into the kitchen, the smell of faeces that hit me was like a ton of bricks to my senses.

My god!  I thought.  That really MUST smell bad if I can smell it.

And to make matters worse – that sneaking, creeping, terrible feeling of awareness started prickling at the back of my neck . . . .

We were going to have to clean her up!!!!

I had a student with me this day.  Not a normal student that I might have palmed off this horrific exercise to as a “golden opportunity of learning”.  Nope, this one was a little sharper than that.

They were one of the fine medical students from the Prehospital Care Programme (PCP).  A Doctor in the making, enrolled onto a programme whereby they get “hands on” experience of the pre hospital environment.

During our checks we’d quickly ascertained that she would need to go to hospital.  Apart from having a few obs that would need looking into further, she had confessed that diarrhoea had simply been “pouring out of her” all morning.

Panic!  The like of which I struggled to hide.  I checked Control on the likelihood of getting an ambulance quick . . .

I glanced up at my student, “Well then Alex*, What ya reckon we should do?”

Alex was already putting on a fresh set of gloves and digging out a bucket from under the sink, “I think we should probably clean Dorris* up?”

What the actual f__k?  Was Alex calling my bluff?  Were they insane?! Were we locked into some subtle psychological game of who would cave in first and bottle out?  Were they actually serious??  That we should just nonchalantly clean this woman head to foot, as if it were a simple task like washing hands??!!!!

“Well done Alex, I completely agree.”  I don’t think I’ve lied so much in one sentence.

And thus ensued over an hours worth of cleaning our patient.  And by cleaning, we really went for gold.  Doris was covered in diarrhoea.  Utterly covered.  From just under her bra all the way down to, and including, her feet.  Front and back.  How the hell she had managed this much coverage was beyond me but it didn’t matter.

We got stuck in.  Buckets and buckets of warm soapy water changed over and over again.  Finishing with rolls and rolls of kitchen towel and toilet paper used to dry her up and then clean the surrounding surfaces.

Until eventually, our patient was sat on a kitchen chair, dressed in clean fresh clothes, hair neatly brushed back out of her face and a lovely cup of tea in her hand.

Alex was busy tying up a full bin bag full dirty paper whilst I was putting the tea bits away.  Both of us had a genuine sense of pride about us.  Me, more so than Alex, I guessed.  I’d faced my biggest fear head on and come out of it smelling of roses.  Well, when I say roses, what I actually meant was, the smell caught in my nostrils would make me wretch for the next week, but that’s not the point.  We were pleased with what we’d accomplished.

And, right at that moment, the ambulance crew arrived.  Perfect timing I thought.  Alex did the hand over explaining the patient’s plight and the effort we’d just gone through to make them presentable for the crew.

We all politely laughed and smiled down at Doris, as if it were a scripted cue to a perfectly happy ending on a funny sitcom.

However, Doris didn’t smile back.  Instead, she managed, “I’m so sorry” before her bowels exploded in a baritone barrage of belly emptying nastiness lasting nearly half a minute.  The smell of which was instantaneous and bowled us all backwards.

“Right.”  The Ambulance medic said trying to close his nostrils, “Let’s just wrap her up and carry her down!”

And after assisting with their bags, Alex and I made a hasty getaway.

*not the real call sign and not their names of course 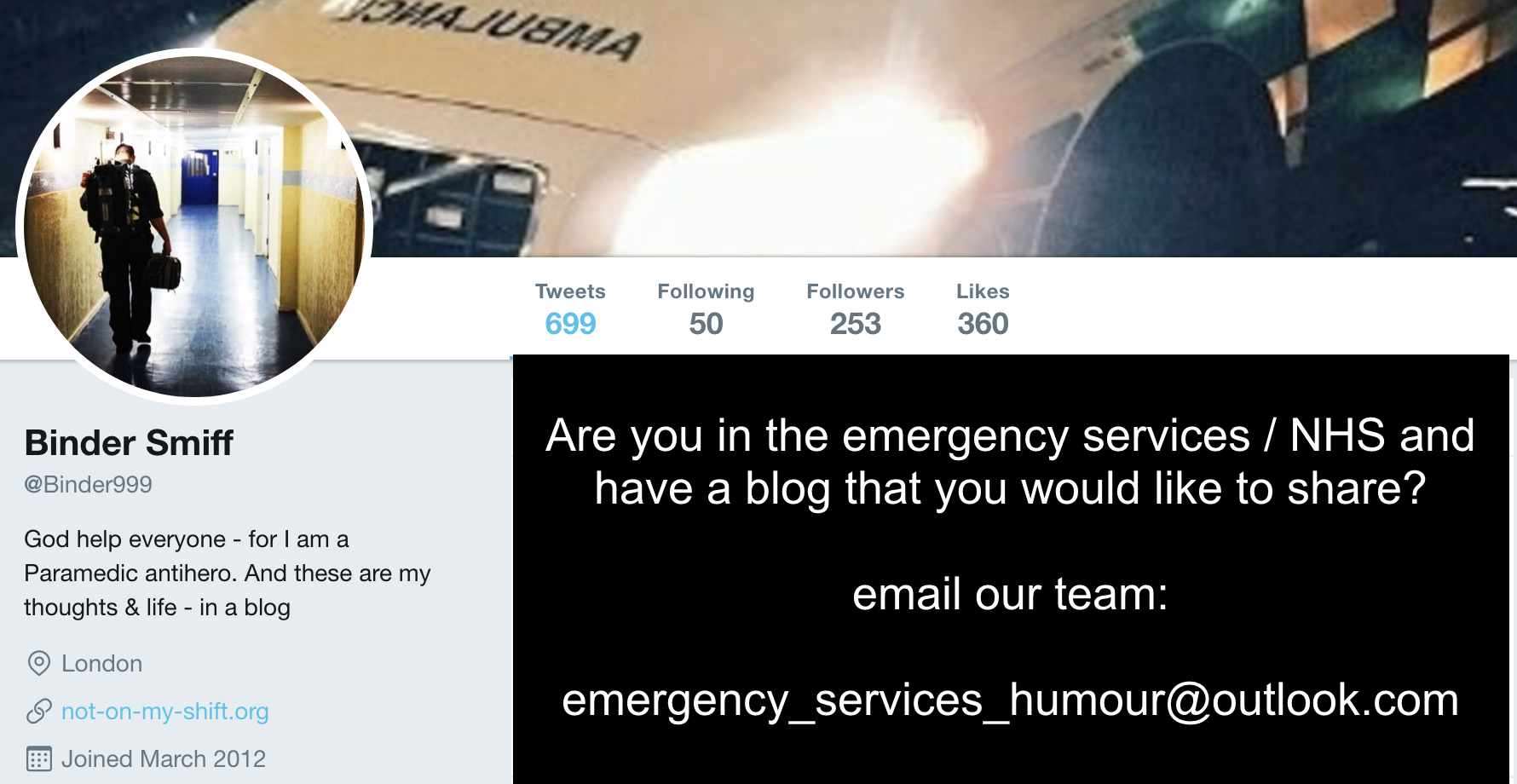