The parking of emergency vehicles seems to be somewhat of a hot topic at the moment. And whilst it’s not the most serious of subjects in the grand scheme of things, we think know why this matter keeps popping up.

At the heart of the issue, is the fact that some members of the public firmly believe that emergency vehicles should be parked in allocated bays – the same bays that they have to park in.

These people seem to think that, when running to a blue light call, upon arrival the emergency services should take the time to park neatly and conveniently in a parking space that civilians also have to park in.

When you try and put yourself into the mindset of someone who might came to this bizarre conclusion, then the only ‘rationale’ that I can think of, when trying to understand the relevant thought process, is that somehow, these people believe that just because they have to park in allocated spaces, then the emergency services should too.

So even though the member of public who typically adopts this mindset would not be called upon to potentially deal with a stabbing, a murder, the kidnapping of a child, the arrest of a violent suspect, they still believe that you, as a Police Officer, are no different from them and thus you must park in the same spot they have to.

It defies any sense of logic and any notion of decency and common sense.

The people who believe that the emergency services should park in parking bays seem to have completely overlooked the fact that, in this case, as a Police Officer, time can really be of the essence.

Time spent looking for a parking space is wasted time. Time spent walking/running to the scene of the incident, having had to park a considerable distance from where the incident is taking place, is a waste of time.

This morning, one of our 250,000 followers sent us a screen shot of a twitter conversation that had taken place between the Chief Constable of Leicestershire Police and a member of the public who took the time to take a picture of a police van that had dared to park directly outside of Sainsbury’s.

After all, what with the current heightened security threat around the country, its great that such individuals are making a note of where emergency vehicles park rather than keeping their eyes peeled for anything suspicious which could be of benefit to the emergency services…

Anyway, here’s how the conversation went: 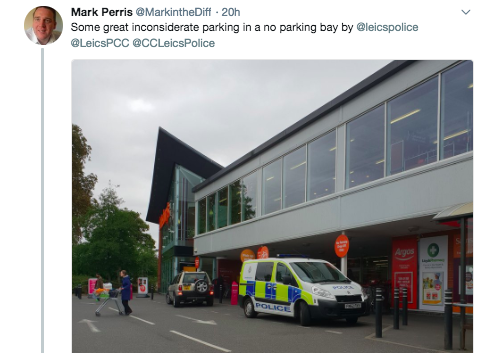 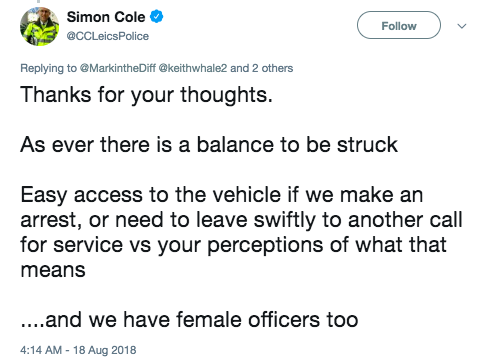 So it would seem that ‘Mark’ initially just assumed that the Police had parked where they did, because they maybe just felt like it.

When, in reality, it turned out that the Police were dealing with a call at the address and, believe it or not, this is normally the reason why the Police park where they do!

I guarantee, that had the call that the Police in this case were attending involved a friend of Mark’s i.e. if, for example, there was an altercation involving one of Mark’s chums, then Mark would be the first person to Tweet the Chief Constable asking why Police Officers spent 10 minutes dithering around, trying to park.

It is a sad reflection in relation to the attitude of a few, that we even have to sit down and write these sort of articles.

But we do so, in the hope of trying to educate people into understanding the challenges of modern-day Policing.

In reality, the police can and should be allowed to park where-ever they want to and they will continue to do so, despite the efforts of a few individuals who seem to want to try and undermine the Police.

Next time you see a Police car parked somewhere YOU think that it shouldn’t be parked, then instead of getting your phone out to take a picture, spend those 10 seconds considering what the Police might be dealing with.

Are they delivering a death message to a bereaved family member of someone who has just passed away? Are they taking a missing persons report for a child who hasn’t been seen for some time?

Have they been called to deal with a stabbing and, being the first officers at the scene of the incident, are now caught up on a crime scene meaning that they have had to leave their police car ‘in situ’.

Or maybe the Police have had to park their car where-ever they could, so that they can run to assist their colleague who is being attacked by someone armed with a knife.

Thankfully, most decent-minded members of the public understand the fact that police officers can and should park wherever they need to, in order to get the job done.

Whenever we share stories such as these, we often see an outpouring of support for the Police and we want to put that sentiment across to our readers.

We just hope that the small percentage of the population who adopt the mindset of believing that the Police should spend ages parking their emergency vehicles before dealing with emergencies, read this article and that perhaps their thought process might just be changed.

And please remember, if you do see an emergency vehicle parked outside of a designated space as its crew try and get some light refreshments, then remember that seconds can mean the difference between life and death.

If you was involved in an incident which meant that you was in dire need of help, would you expect of the Police to spend several minutes looking for a parking space before coming to help you?

Of course you wouldn’t! So with this in mind, please just let the Police do the job that they signed up to do: to make a difference and to help people!

And our message to our colleagues in the emergency services?

Keep parking wherever you need to! 99% of the population understand that deciding on where to park is the least of your worries! We will continue to try and enlighten those who walk with the blinkers of confusion around their eyes…