BANTER Training Rolled Out To Police Officers. No, Seriously…

by John Johnson
in Blogs, Emergency Services News, The Back Canteen, You Couldn't Make it Up
4 min read
0

One of the many things which you learn when you join the police (or any other part of the emergency services), is the fine art of banter.

Or at least, it is something you should learn in order to prevent yourself from becoming offended at, literally, everything.

Anyone who has served in the emergency services, or indeed the armed forces, will tell you that banter is a key component to ensuring that morale is maintained, even when it feels like everyone outside of your team/unit is trying to stitch you up.

But it would now seem that one police force has decided to try and officiate what it sees as being banter and what it deems as being ‘over the mark’.

Police officers from Leicestershire Constabulary seem to be amongst the first to be subjected to this strange and mildly condescending training.

The course, which The Times reported many on it thought was a joke, will teach officers about the ‘fine line’ between being funny and being offensive.

Forgive me for being cynical here, but no amount of ‘training’ will ever dictate to someone as to what is funny and what is offensive, as people have different levels of sensitivity.

It should come down to good old fashioned people skills when deciding who may find your banter funny Vs who may find it offensive.

So how on earth can this foundation upon which a dark sense of humour is built, ever be ‘taught’!?

Take away the banter and you take aware a dark sense of humour.

Take away a dark sense of humour and you are left with no real coping mechanism for processing incidents which defy decency, common sense and logic.

It has been mentioned that the aim of the ‘training’ is to ‘put political correctness in its place, recognise the benefits of fun at work and focus on the risk and responsibilities for all concerned’.

No offence, but when anyone in authority (or in the equality unit) ever describes something as ‘fun’ then it ceases to be ‘fun’.

And what about ‘risk and responsibilities’!?

If you cannot take a joke, or you take yourself too seriously, then you need to question whether an environment like the police force is for you.

But then this is a part of the problem!

It was only recently that a common-sense-defying story surfaced of how a senior Met Police Officer was ‘reported’ by what must have been the king or queen of the snowflakes, for DARING to use a phrase that has been around since the times of Shakespeare.

And no amount of banter training can prepare you for encountering someone who sees it fit to make an issue out of something so utterly ridiculous.

If it is known that there is someone on your team who consistently has a sense of humour failure, then common sense dictates that you just have the same conversations with them as you what you would do with top brass or a civilian reporter i.e. keep it clean, boring and professional.

It has been reported in The Times that the course will apparently teach officers about banter-related case law and employment tribunal claims.

It hopes to reduce the number of ‘excluded, unhappy and unproductive staff’.

Well, I am sorry, but banter is at the heart of what makes people happy – being able to have a laugh with your colleagues.

If there is someone who does not want to have a laugh, then that’s up to them.

It should not be for everyone else to have to think about ‘banter training’ before trying to lighten the mood.

I have been out of the police force for a number of years now and the one thing that I miss the most, is the banter!

I felt the same when I left the armed forces – the banter was responsible for some of my funniest and fondest moments. 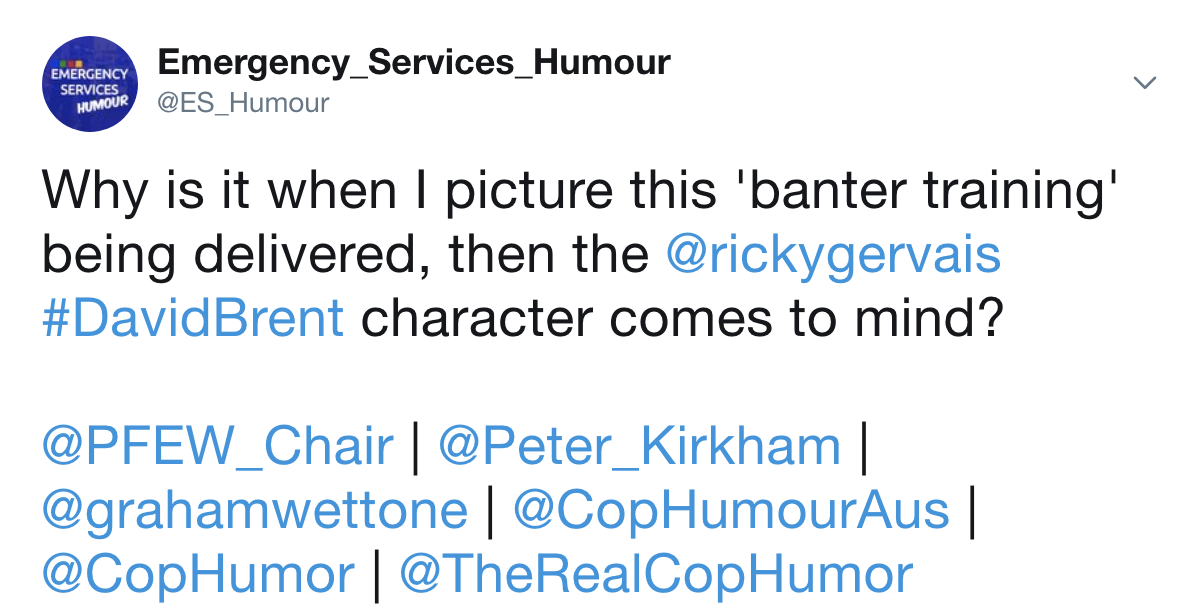 Instead of ‘teaching’ people about ‘appropriate banter’ the training should instead be offered to police officers who consistently have a sense of humour failure.

It should be called ‘how to lighten up training’.

The thought of ‘equality units’ up and down the country trying to be cool enough to lecture seasoned officers about what is and what is not banter, reminds me of the David Brent character from ‘The Office’ trying to be ‘one of the lads / ladettes’.

It just does not work.

Officers might be forced to attend, but the ‘back canteen’ is a holy place free from the shackles of political correctness.

If you get offended, then just avoid the back canteen.

Go and have a cup of tea with the Direct Entry Superintendent instead….#Bantz

Male Sentenced After Pointing Gun At Paramedic In Ambulance