Armed Police Officers Help To Save Newlyweds From Torrential Rain

A bride and groom got an unexpected, but very much appreciated, helping hand from an armed response vehicle crew who just happened to be driving by whilst on patrol and who offered to give them a lift to their wedding reception after seeing them struggling in the rain.

An article on the BBC’s news website said that Alexandra and Michael Dunbar were braving the weather when a Merseyside Police armed response vehicle stopped and offered them a lift in Sefton on Saturday.

“Congratulations to Mr and Mrs Dunbar.

“Little did you know that the bride’s “something blue” would be our boys in blue.

“From our ARVS, who gave you a lift to your reception, and all their colleagues at Merseyside Police we wish you all the best for your future together.”

Most people praised the kind gesture made by the police officers, but, as-per-usual, the gaggle of ‘sovereign citizens’ cropped up ‘demanding’ that the officers make better use of their time:

Maybe these ‘sovereign citizens’ who are DEMANDING that the police account for every single minute of every single police officers shift, have never heard of ‘community engagement’ or ‘helping people out’?

It doesn’t require a Nobel Peace Prize winner to understand that helping people out is something that is often done by people who actually care about other people.

If the same individuals moaning about the police helping this couple out were ever in the same situation, then who wants to make a bet that they would be extremely thankful to the police for helping THEM out? Double standards….

Or had the police of helped members of the sovereign citizen’s families out, then I am sure that their moaning would be replaced by messages of thanks.

Or maybe these sovereign citizens are just so bitter, that they would not have the heart or presence-of-mind to thank these officers if they had of helped out members of their own family, who had just tied the knot?

I am trying to think now, of all of the times that I gave a quick lift to people when I was in the Police….It can’t have been more than maybe 3 or 4 times during a 7-year period.

I can then send cheques to these sovereign citizens, giving them a rebate on their ‘taxpayers’ money for the 5 minutes it must have taken me each time I decided to try and help someone out by  giving them a lift.

Thankfully though, most reasonable people were quick to praise the officers for taking the time out of their busy shift to help a couple who were trying to pull off what was, hopefully, one of the best days of their lives.

The couple, from Walton in Liverpool, had been walking to their reception at Aigburth Peoples Hall after being married at Sefton Park Hotel.

However, they left guests “surprised” when they arrived with the two-tones blaring and blue lights flashing, Mr Latham told reporters from the BBC.

“The reception was about 250 yards up the road and we were all walking up in the rain when the police just pulled over and said ‘how are you doing’ and ‘do you fancy a lift as it’s raining?’,” he said.

“They cleared the back of the car out and the pair of them just got in.

“She had a long dress on and… it would have got absolutely filthy if they hadn’t given them a lift.

“It was a lovely gesture.” 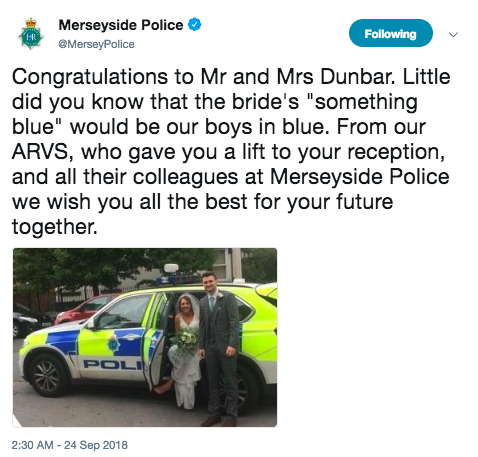