APPEAL: West Midlands Ambulance Service Appeal For Help After TWO Of Its Ambulances Were Pelted With Bricks

West Midlands Ambulance Service have appealed for help in trying to catch the VILE individual(s) who deliberately targeted their emergency ambulances by throwing bricks and other missiles at their vehicles.

In yet another senseless attack on emergency ambulances in the area, both members of the public and emergency services personnel will be shocked and stunned at just how low some people can stoop to when it comes to being in possession on NO morals!

Hopefully, if this article gets shared enough, then maybe, just maybe, someone will know something and the vile individual(s) responsible for this attack can be brought to justice.

‘West Midlands Ambulance Service is appealing for the public’s help in apprehending the individual(s) who attacked not one, but two ambulances with bricks.

‘The two incidents took place as the ambulance went through the underpass on Birchfield Road at the junction of Aston Lane in Birmingham at about 2.30pm on Tuesday afternoon; the second incident took place at the same location at around 3.00pm.

‘In the first case, the vehicle was travelling on blue lights to a patient with breathing difficulties.  The ambulance crew had to stop as the windscreen was damaged and meant that a second ambulance had to be sent to the 999 call, resulting in a delay of around 10 minutes in getting help to the patient. 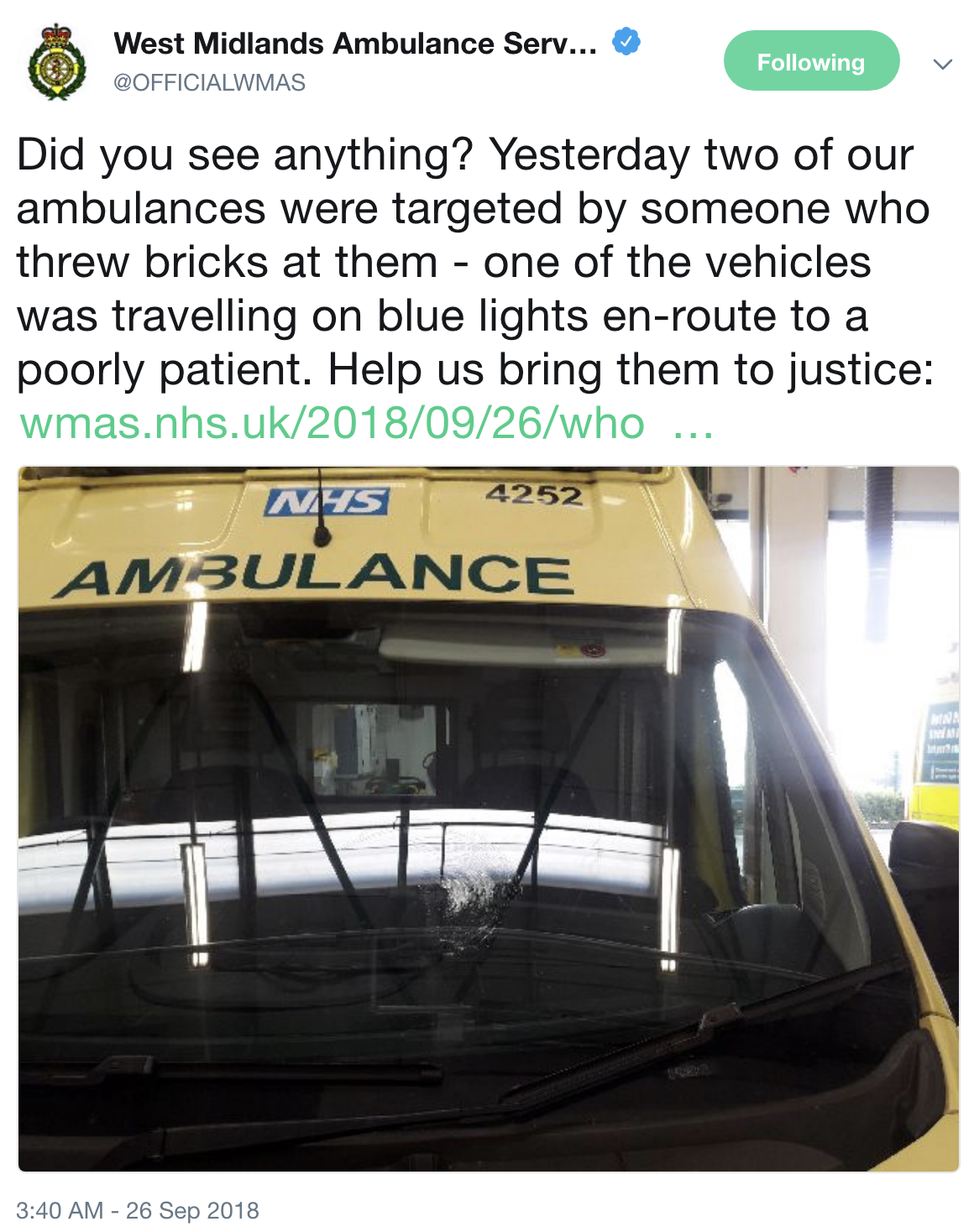 ‘In a bizarre twist, it was that second ambulance that was also targeted as it took the same patient to hospital.  On this occasion, the crew heard a loud bang as they drove along, but it was only once they arrived at hospital that they discovered a dent in the ‘A Post’ just above the windscreen and driver’s door.

‘Both vehicles are now off the road and it will cost hundreds of pounds to repair.

Emergency Services Operations Delivery Director, Nathan Hudson, said: “It is hard to put into words how angry and disappointing these incidents are.

“Throwing a brick at any vehicle is dangerous and idiotic, but when it is an ambulance responding to an emergency, it’s beggar’s belief.

“Never mind that two vehicles are off the road which could be out helping to save lives, this was a horrendous incident for the staff involved.  They do a difficult job at the best of times, but to have this sort of incident happen has understandably left them shocked and upset.  I am just thankful that no-one was hurt. 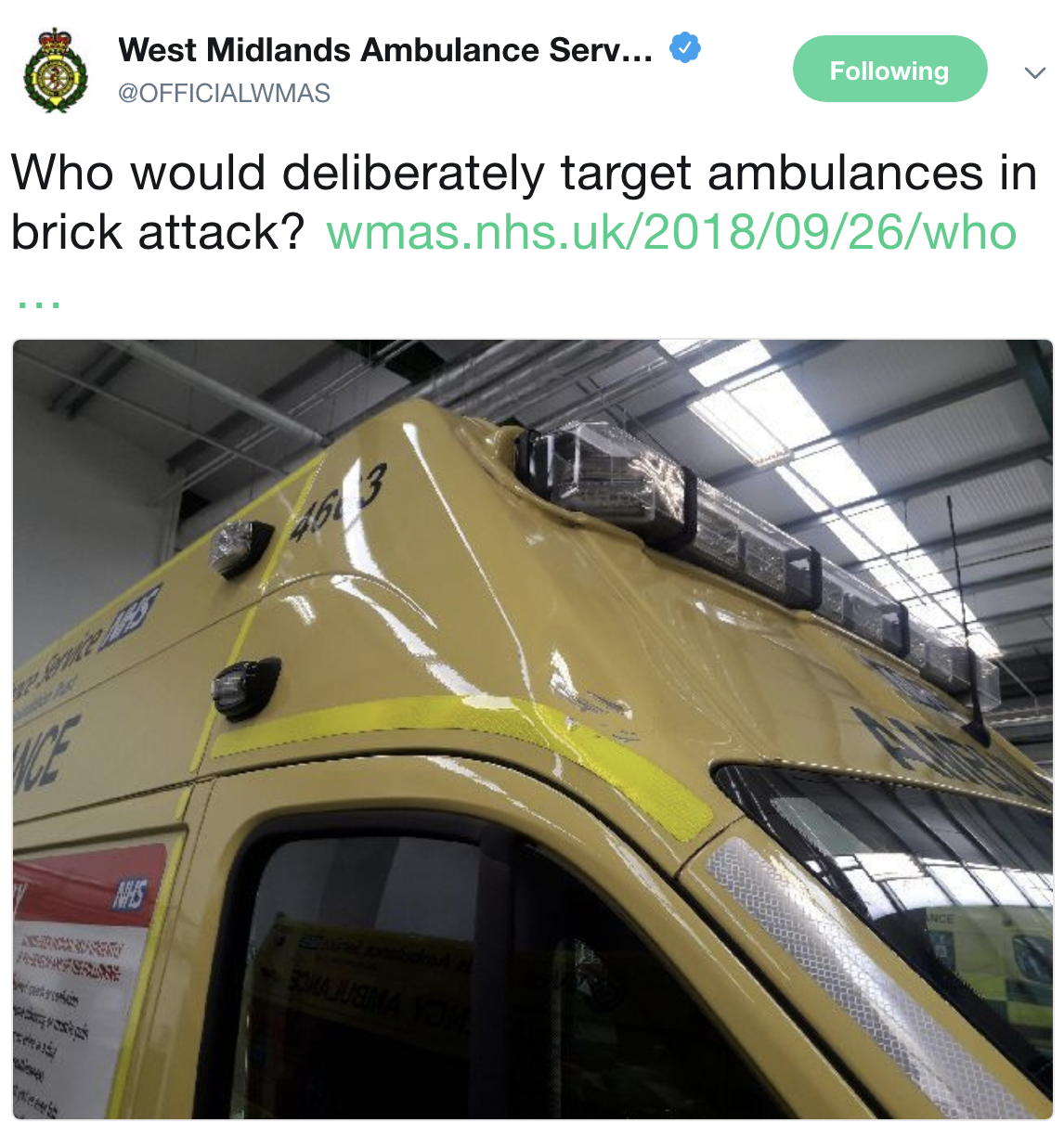 “The potential for this to have turned into an incident which resulted in serious injury or worse is plain to see.  I am therefore asking anyone who was in the area who saw anything or who has CCTV of that area to contact West Midlands Police as soon as possible so that those responsible are brought to justice.”

It is only by sheer ‘luck’ that neither the ambulance crew nor the patient on board the vehicles ended up being involved in a serious road traffic collision following these senseless attacks.

Had the missiles thrown at the ambulances of penetrated the windscreens, then there is no telling what could have happened.

In our humble opinion, when the vile and disgusting entities responsible for these attacks get caught, then they should be charged with attempted murder as the outcome of a brick penetrating a windscreen and hitting someone in the head as the vehicle travels at high speed is inevitable.

Here at Emergency Services News, we are at a loss to try and understand what motivates someone to target emergency ambulances? 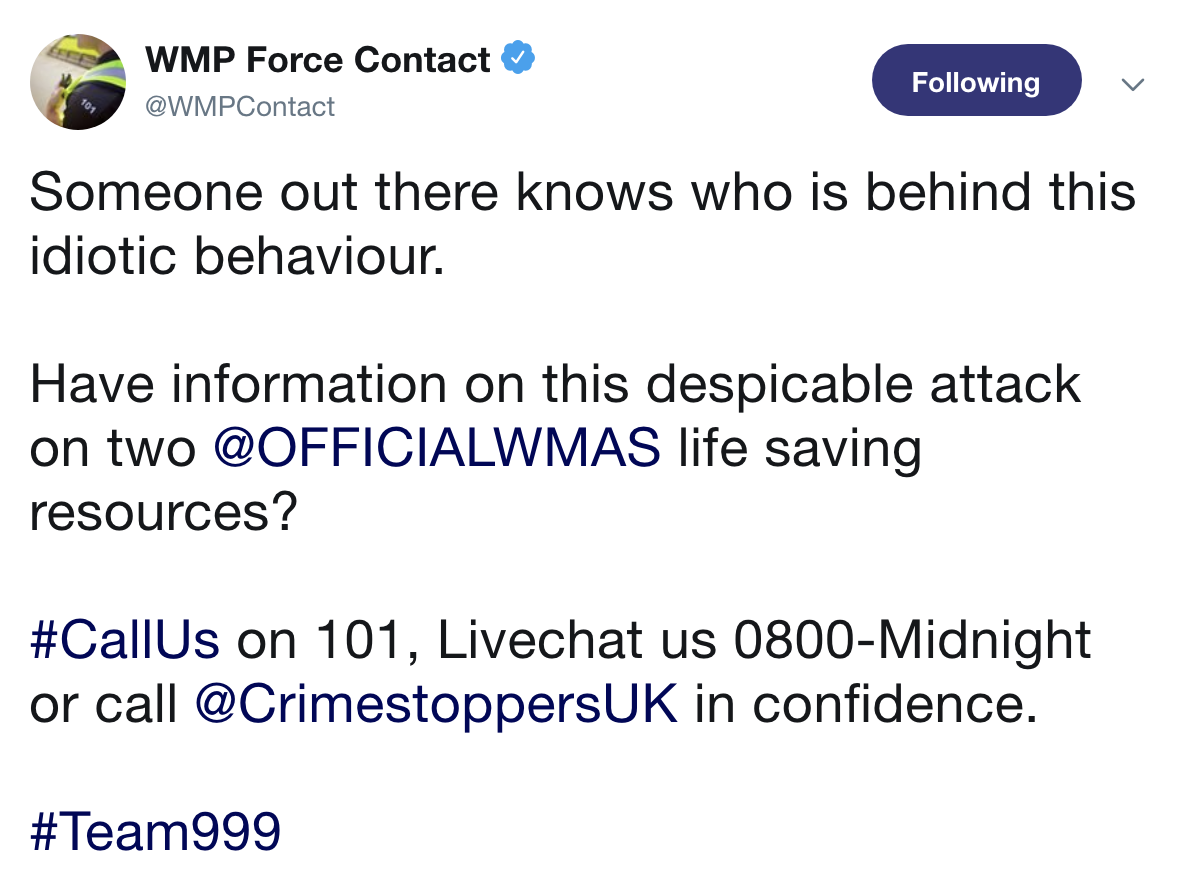 How hateful and evil must you be to deem it ‘right and proper’ to, upon seeing an emergency ambulance, decide to lob bricks at it?

Anyone with information can contact West Midlands Police via Live Chat at www.west-midlands.police.uk between 8am and midnight, call 101 anytime or contact Crime Stoppers anonymously on 0800 555 111. 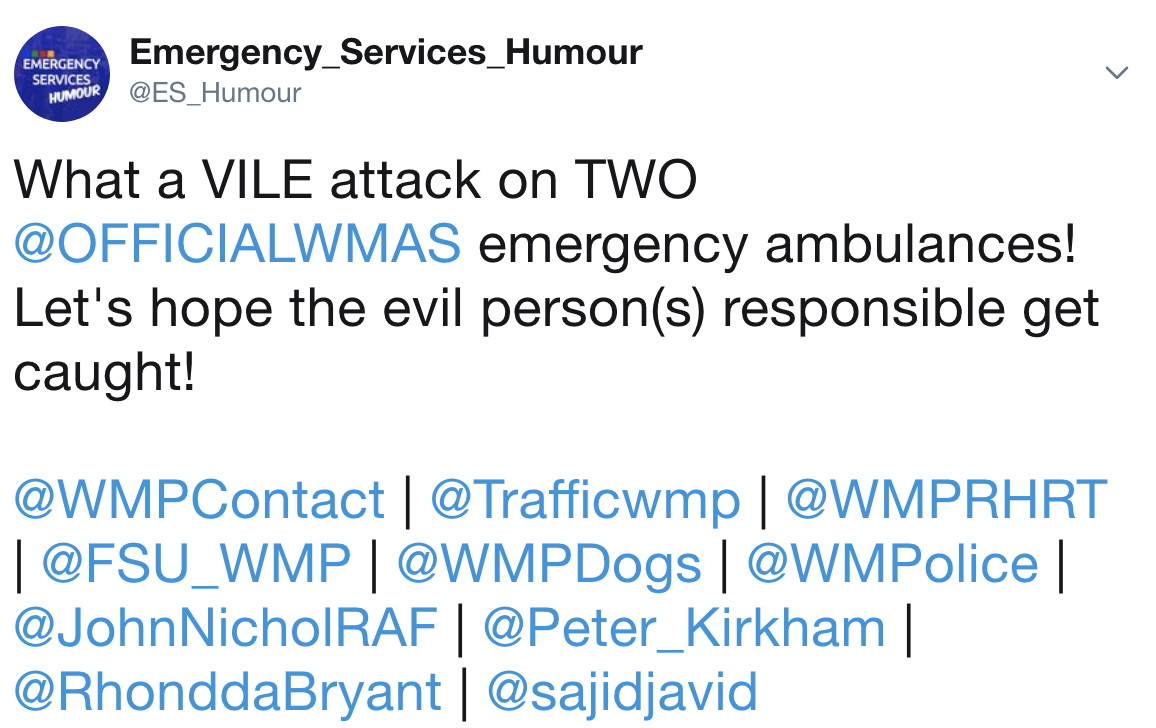