The dreaded hospital guard…Ask most police officers about what is seen, by some, as one of the worst postings for a shift and they will quite happily share with you their frustration at having to sit down A&E for up to 14 hours with a ‘patient’.

In particular, ‘detained persons’ at police stations seem to think that if they tell the custody Sgt  that they require a visit to A&E, then their initial period of 24 hours in police custody will be ‘used up’.

And then we have the patient that poses a threat to NHS staff because of their ‘anger management’ issues. The patient who will kick off and lash out at nurses who dare to try and help them.

Hospital security won’t sit with these patients, as its apparently not in their ‘remit’ or there just aren’t enough of them. Not their fault.

So you end up having the majority of a police response team, sat down A&E ( on average, two officers to one patient) because there’s no-one else to ‘guard’ these adults who cannot be trusted to not assault A&E staff and/or run away.

Meanwhile, the constant wave of 999 calls start to stack up back at the control room, because there is no-one available to be assigned to them.

Its a problem that has been around for decades and happens all over the country.

Police officers are expected to sit and stare at a patient for 12+ hours because there is no-one else who can do it.

As this tweet that was shared by @ResponseWMP clearly shows, something needs to change in order to try and stop this massive drain on police resources: 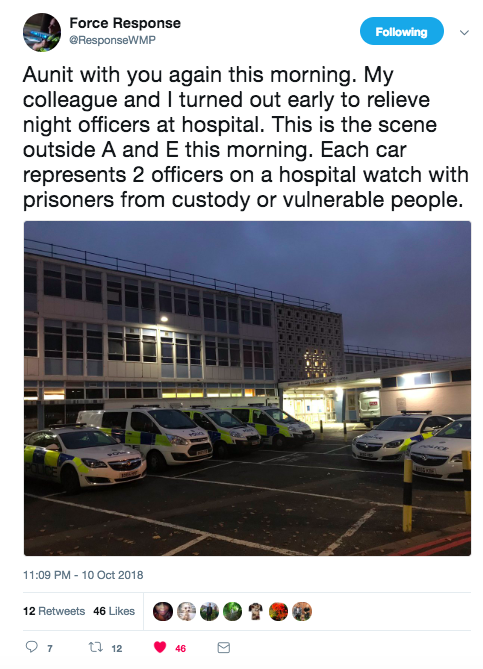 It’s not the fault of the police that they have to sit there staring into space for 12 hours whilst the individual who they have been told to keep a eye on gets checked out.

And what about when the radio call comes out for an officer in need of some urgent assistance whilst dealing with a job?

There will be no-one to send, as their colleagues are going to be all committed and non-deployable owing to the fact that they are sat down A&E.

Sometimes, sitting down the hospital with a patient, cannot be avoided.

But then what about sifting out the ‘detained persons’ who decide that they want to go to A&E for a ‘jolly’ because they are bored of having to sit in their cell waiting for their brief to arrive?

Other than crime scene guards, hospital guards are amongst the biggest drain on police response teams.

I am sure that there are some civvy contractors out there who could be paid to sit with patients whilst they make their way through A&E rather than, as in this case, pulling 12 officers off the streets.

The calls wont go away – they will still need to be dealt with and neither will the mountains upon mountains of paperwork get sorted out.

Since sharing this article, we received the following message from someone who wanted to remain anonymous:

“Just responding the the hospital guard thing….. This night in question there was no security…. The trust won’t employ anymore….

“Not sure if you can add it to the post but please keep anon. Think people should know how under funded and understaffed they are.

“We do try and keep the officers fed and watered whilst there, we do our utmost to facilitate transfer so they dont have patient sit.”