15,000 Prosecutions Predicted Under The Planned Assaults On Emergency Workers Bill

For those who may not know, there is currently a bill making its way through the House Of Lords that is intended to help protect our emergency services by making it, collectively, a separate/aggravated offence to assault a member of the emergency services.

A note on the Parliament.UK website states that the bill is intended:

‘To make provision about offences when perpetrated against emergency workers, and persons assisting such workers; to make certain offences aggravated when perpetrated against such workers in the exercise of their duty; to require persons suspected of certain assaults against such workers which may pose a health risk to provide intimate samples and to make it an offence, without reasonable excuse, to refuse to provide such samples; and for connected purposes’.

The Bill was sponsored by Chris Bryant MP ( @RhonddaBryant ) and Baroness Donaghy several years ago and is set to hopefully make it onto the statute books (potentially) in the next few months.

In a letter seen by Emergency Services News, Baroness Vere has explained how it is anticipated that around 15,000 prosecutions would be brought under the new bill.

The letter, written in response to a query raised by another member of the House of Lords, states:

“I write to clarify a point raised at the second reading debate on 29 June on the Assaults on Emergency Workers (Offences) Bill.

“During the debate, you asked me about the government’s estimate that there will be approximately 15,000 prosecutions under this Bill if it is commenced.

“You also asked if I would undertake to publish the methodology by which this estimate has been reached, and how much of this would be displacement of what would otherwise have been prosecuted under other current offences.

“with regards to the methodology of how this estimate of approximately 15,000 was reached, analysts from the Ministry of Justice used data on proceedings for offences that already existed against emergency workers e.g.e the 2016 proceedings for “assault on a constable” or “assaulting a prison custody officer”.

“this was used alongside data from the 2014 Crown Court Sentencing Survey which showed that 7% of defendants sentenced to prison for assault offences in the Crown Court had the aggravating factor of “offence against public sector/service workers” applied to their sentence.

“this figure was applied to the total number of proceedings for common assault in 2016 (9,300) to derive a figure of 4,900, which provided an estimate of assaults committed against other emergency workers (e.g. NHS workers) who are not currently covered under a specific offence.

“the combining of these two figures provided an approximate volume of assaults per year against emergency workers as a whole.

“this total volume was estimated to be approximately 15,000, the number of estimated prosecutions for the new offence of assault against an emergency worker”.

The team here at Emergency Services News are 100% behind this bill and think that creating a specific offence of assaulting a member of the emergency services has been long overdue.

Each member of our team has served on the front-line of the emergency services and/or armed forces.

We only hope that, as-and-when this Bill does makes it onto the statute books, then the sentences handed down to the individuals convicted of the offences covered under the bill reflect the severity of the assault.

For months now, we have been covering stories where members of the emergency services have been assaulted; from police officers to volunteers in the RNLI.

We are passionate about ensuring that the number of assaults inflicted upon the brave men and women of the emergency services and NHS is reduced.

Of course, we would love to see these assaults stop altogether, but we are not that naive!

Surely one way of measuring how ‘civil’ a society we are, is by looking at how we treat members of the emergency services and NHS?

It was only a few days ago, that we covered a story of how a paramedic was KNOCKED UNCONSCIOUS in A&E by a patient who, having knocked the paramedic out, told bystanders that he, having assaulted the paramedic, would now be seen quicker!

Or the police officer who was mowed down several days ago by a suspect and ended up in hospital with serious injuries after the attack.

We are talking here about men and women who are putting their lives on the line on a daily basis in order to protect the public, so we must do everything we can to ensure that these brave men and women are also protected.

During my time in the Metropolitan Police, I was stabbed in the leg as well as being kicked, punched and spat at.

Some people may say that this is just a ‘part of the job’ and to ‘suck it up’.

But the sentences handed down to those convicted of such assaults should and must reflect the severity of the crime.

There is no point being lenient with those who are convicted of assaulting members of the emergency services, otherwise the Bill is effectively just a bark without a bite.

The repeated testimonies of front-line 999 personnel being assaulted only to find that the individual(s) responsible for their injuries, have walked away from court without a custodial sentence is shocking.

We need to have a zero tolerance approach to people who are convicted of assaulting members of the emergency services, notwithstanding such assaults which are committed by individuals who are suffering from mental health issues.

I have seen too many of my former colleagues assaulted and I continue to hear about too many incidents whereby my oppos are STILL being assaulted.

Written by one of the many admins of Emergency Services Humour who is also a regular blogger in our fortnightly eMagazine ’S__ts & Giggles’ which you can sign up to by visiting our Facebook page and clicking on the ‘sign up’ button or by visiting ShitsAndGiggles.Online

If you have an anonymous blog that you would like us to share with our readers, then feel free to contact us using the details below. 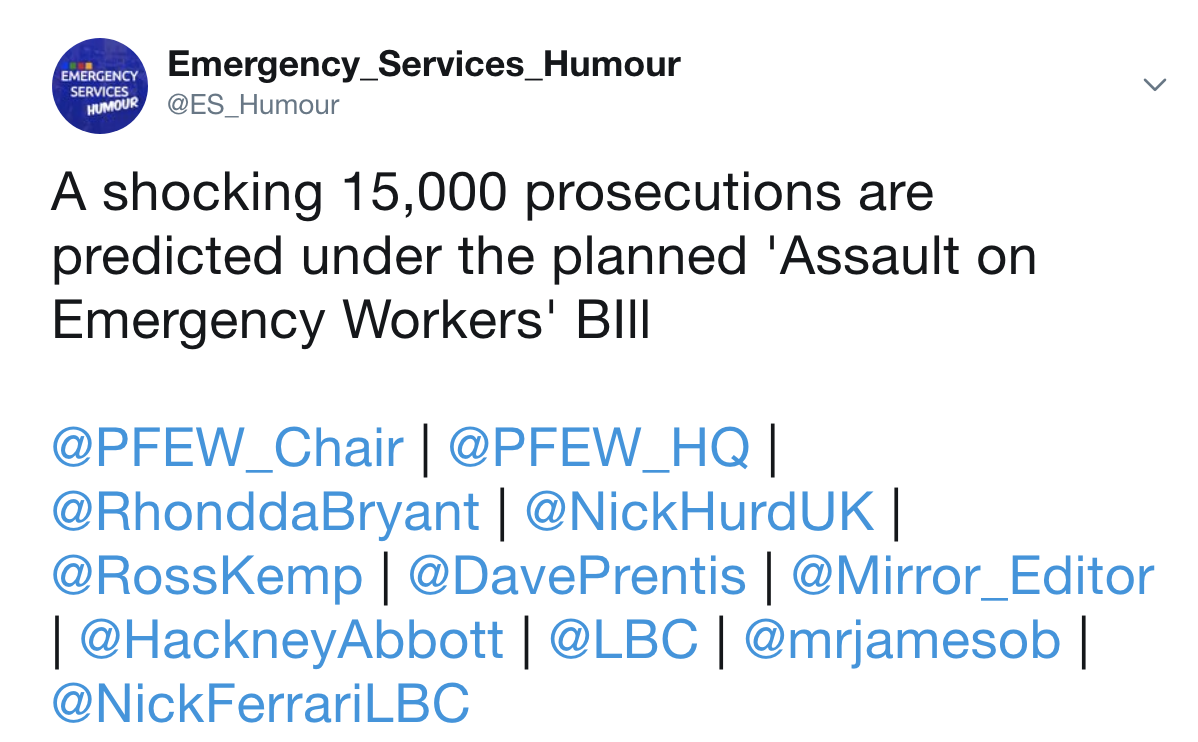