The Metropolitan Police & British Transport Police have revealed that on Sunday (27th August) of the 133 arrests made during the first day of the Notting Hill Carnival, 42 were for suspected drug offences, 20 were for suspected offensive weapon offences and seven for public order offences.

Sunday has traditionally been referred to as ‘families day’ with today, Monday 28th August, normally being reserved mainly for adults.

Having policed the Notting Hill Carnival myself on a number of occasions, whilst serving in the Met Police, Monday was always the day that most Police Officers dreaded – especially when the sun comes out and ‘PC Rain’ disappears.

Police Officers at the carnival have been granted extra stop and search powers in order to try and minimise the disruption and violence that is always caused by a small minority of individuals who are always intent on causing problems during Europe’s largest street festival.

Meanwhile, the Metropolitan Police Federation has revealed that two officers have been taken to hospital in order to be checked for contagious diseases having been spat at whilst policing the event.

Those Officers will now have to endure a very stressful and unnerving period of time as they are tested to make sure that they have not contracted any life-threatening or debilitating diseases as a result of being spat at.

‘Sad to report two Metropolitan Police Officers have been transported to hospital after being spat at in the face at the #NottingHillCarnival. #ProtectTheProtectors’

In response, the Chairman of the Police Federation of England & Wales, John Apter ( @PFEW_Chair ) tweeted  :

‘Please pass on my best to the officers, a vile thing to happen.

Our colleagues must have access to the equipment to protect them from such attacks.

Spit Guards are a simple but effective way to minimise the risk.

If you don’t want to wear one…don’t spit!’

‘Employers have a duty to provide PPE under PPE Regs 1992… I would suggest the officers involved pursue personal claims against their chief who withdrew the spit guards.’

These latest reports of police officers being spat at comes on the back of news that the Metropolitan Police Commissioner, Cressida Dick, has told front line officers that they are not allowed to use spit hoods to in order to protect themselves from ‘individuals’ who want to cover them in potentially disease-ridden saliva. 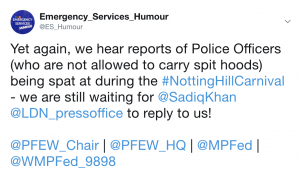 Custody Officers, who are out of public view, ARE allowed to use spit hoods, but not front line officers in a move that reeks of political correctness.

Why would you allow officers back at the police station to use spit hoods to protect themselves, but not officers out on the streets?

We contacted the Mayor’s Press Office last week (see below) in order to get his opinion on this bizarre decision that unnecessarily puts the lives of police officers at risk. But guess what? We have not heard anything back!

7,000 Officers have been drafted in to police the Carnival this year as the capital endures a spike in violent crime and murders.

Police Forces from across the country have sent officers to London in order to help the Met Police provide enough cover for the event.

Note, however, I did not use the term ‘extra officers’ as the vast majority of these officers will be working on their days off. Each year, thousands of Police Officers have their rest days cancelled in order to police the notting hill carnival.

Plain clothes officers will also be mingling in the crowds in order to try and spot the early signs of any disorder.

‘The Metropolitan Police Service (MPS) has this morning, Monday 27 August, imposed a Section 60 Order across the Notting Hill Carnival geographical area for a further 15 hours, between 09:00hrs until 23:59hrs.

This follows an order imposed on the area, yesterday, Sunday 26 August.

The order gives police the power to search people within the Carnival area, when they believe there is the possibility of serious violence; or that a person is carrying a dangerous object or offensive weapon; or that an incident involving serious violence has taken place and a dangerous instrument or offensive weapon used in the incident is being carried in the locality.

Notting Hill Carnival Gold Commander Dave Musker, said: “As the Gold Commander responsible for the policing of this event, my job is to ensure everyone participating and attending can enjoy a safe and spectacular event.

“On Sunday, my officers along with colleagues from the British Transport Police arrested 133 individuals for a range of offences and 20 weapons were seized, including knives. I am confident that the Section 60 order imposed yesterday prevented these dangerous items being brought to Carnival, and based on the intelligence at my disposal, I consider it proportionate and necessary to ensure a safe Carnival today.

“The use of this authority will reassure our communities that we are constantly working to protect them. It will also send a message to those intent on committing acts of violence that we will robustly target them.

“Section 60s have been used tactically to prevent violence across London over the past few weeks and I can assure you they are not used without detailed analysis of intelligence.

“This decision has been made with the safety of all those planning to attend this event in the forefront of my mind. The order is kept under constant review, and when I believe this no longer forms part of a proportionate policing plan, it will cease.”

We should remember that the vast majority of revellers attending the street festival, enjoy the atmosphere of what is arguably one of the biggest annual events in London. And the carnival can have a really good vibe – when the troublemakers are kept away that is!

But, as with all events which draw a large crowd, you will ALWAYS get a small minority of people who forget to leave their egos at home and who are intent on causing trouble.

The images of seeing someone get a Jack Daniels bottle smashed across their face during an argument that I witnessed whilst policing the notting hill carnival one year, still haunts me to this day!

If you have an emergency services related story or blog (whether its light-hearted or serious), then contact our team of former emergency services personnel at: emergency_services_humour@outlook.com or tweet us at @ES_humour or message us via our Facebook page @EmergencyServicesHumour